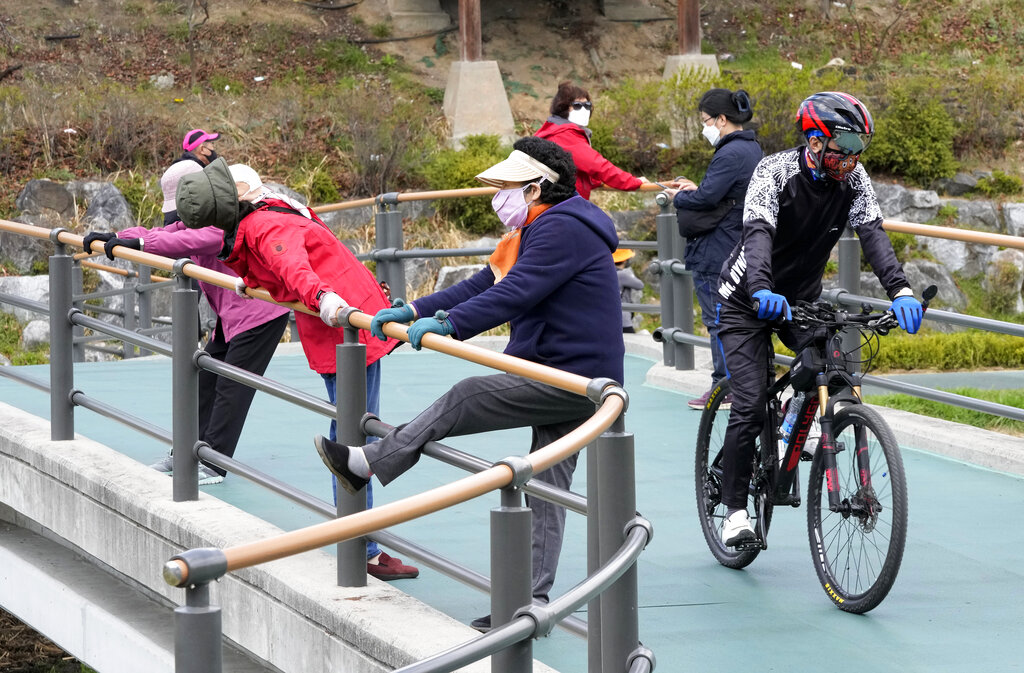 People wearing face masks as a precaution against the coronavirus stretch at a park in Seoul, South Korea, Friday, April 1, 2022. (Photo: AP)

South Korea will ease some of its pandemic restrictions starting next week as officials express cautious hope the worst of its omicron outbreak has passed.

The limit on private social gatherings will be raised from eight to 10 people starting Monday, while restaurants, bars and other indoor spaces can stay open an hour later, until midnight, Prime Minister Kim Boo-kyum said Friday.

Officials said most social distancing restrictions could be removed, except for an indoor mask mandate, if the outbreak further slows and the medical response remains stable over the next two weeks.

Kim’s announcement from a government anti-virus meeting came after the country reported a daily average of 316,000 new coronavirus cases in the past seven days, a modest decrease from the average of 357,800 a week before. The one-day record was 621,187 on March 17.

While Kim said the country has likely passed the peak of infections, there’s still worry about the pressure on hospitals, given the week or longer intervals between infections, hospitalizations and deaths. Officials also say the highly transmissible omicron subvariant called BA.2 is slowing the decline in overall infections.

“Fortunately, the outbreak has slowed for the second consecutive week,” Kim said. “But there’s persisting concern about an increase in serious cases and deaths that might come after time lags, the spread of ‘stealth omicron,’ or BA.2, which has become the dominant strain, and an expected increase in travel during spring weather."

The country has averaged 328 deaths in the past week, including 360 in the latest 24 hours, while around 1,300 virus patients were in serious or critical condition. More than 64% of South Korea's 2,800 intensive care units designated for COVID-19 treatment were occupied.

“Even if we ease social distancing, the increase in infections is expected to be only around 10 to 20%,” he said during a briefing.

Quarantine requirements for close contacts, hospitalization for mild cases and proof of vaccination or negative tests when entering public spaces were some of the measures eased or lifted earlier.