Beaches and churches were closed and baseball games were played in empty stadiums on Sunday after South Korea added hundreds of new cases to its growing coronavirus caseload amid concerns that the epidemic is getting out of control. 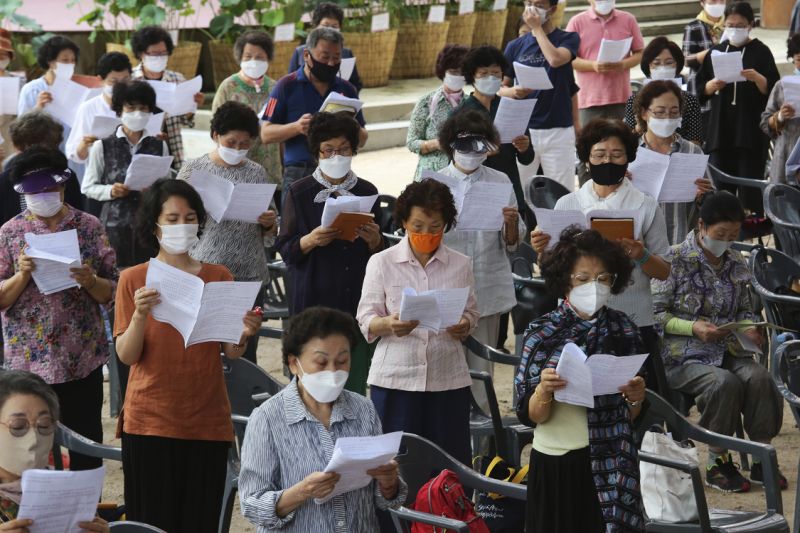 The 397 new cases reported by South Korea’s Centers for Disease Control and Prevention marked the 10th straight day of triple-digit increases and indicated that the speed of the virus's spread was nearing the levels seen during the worst of the outbreak in the spring.

The resurgence, which began in the densely populated capital area before reaching practically every major city and provincial town over the past week, is a major setback for a country that had been eager to tout its hard-won gains against the virus.

KCDC Director Jeong Eun-kyeong said things will probably get worse before they get better. The daily jumps could become even bigger in the coming days because health workers are increasingly struggling to keep up with the pace of infection, scrambling to trace and test the contacts of virus carriers, she said.

“We don’t see the current state as the peak ... we believe that infections could further increase,” Jeong said during a virus briefing. “Patients are increasing not only in the Seoul metropolitan region, but also across the 17 (major) cities and provinces throughout the country, pushing us on the verge of a massive nationwide outbreak.”

After avoiding stringent social distancing measures because of concerns about hurting the economy, officials stepped up restrictions nationwide on Sunday.

They banned gatherings of more than 50 people indoors and 100 people outdoors and shut nightclubs, karaoke rooms, buffet restaurants and computer-gaming cafes. Churches can hold online services only while fans were removed from professional sports, just weeks after baseball and soccer teams had been allowed to sell limited portions of their seats.

The Seoul city government said it will require people to wear masks in public — indoors and outdoors — starting Monday. It wasn’t immediately clear how the city could effectively enforce such requirements. Seoul has been mandating masks on mass transport since May, but enforcement has been relatively lax as it depends on bus drivers and subway station workers.

Some experts say such measures are too little, too late.

There’s a possibility that government officials this week could further elevate social distancing measures to “Level 3,” which could include prohibiting gatherings of more than 10 people, shutting schools, halting professional sports and advising private companies to have employees work from home.

“An elevation to ‘Level 3’ practically means the stoppage of all daily activities aside of essential social and economic activities, and that would bring painful results to all our people and the economy as a whole,” senior Health Ministry official Yoon Taeho said during a separate briefing. He called for vigilance by citizens to slow the spread of the virus, and pleaded that people cancel or push back large events such as weddings.

Sunday’s jump in infections marked the third consecutive day they’ve crossed 300. Most of the new cases have come from the Seoul area, home to half of the country’s 51 million people. Cases were also reported in other major cities such as Busan, Gwangju, Daejeon and Daegu, the epicenter of the previous major outbreak in late February and March.

The country managed to stabilize the situation in the Daegu area by April through aggressive testing and contact tracing. That approach worked because many of the infections had been tied to a single church congregation with thousands of members.

But it’s unclear if the formula will be as effective now, with the virus spreading nationwide.

“With the number of virus patients rising rapidly, it has become difficult for anti-virus measures alone to contain the outbreak — the reduction of human-to-human contact is crucial,” Jeong said.

Churches have constantly been a major source of infection. More than 840 cases so far have been linked to a Seoul church led by a bitter critic of the country’s president.

The spread worsened after thousands of anti-government protesters, including members of the Sarang Jeil Church and its conservative pastor, Jun Kwang-hun, marched in downtown Seoul last week despite official pleas to stay home.

Jeong said at least 136 infections have so far been linked to the protest. Jun has been hospitalized since Monday after testing positive for the virus.

Health workers have used cellphone location data to identify some 50,000 people who spent more than 30 minutes on the street during the Aug. 15 protest 15 and have been urging them to get tested.