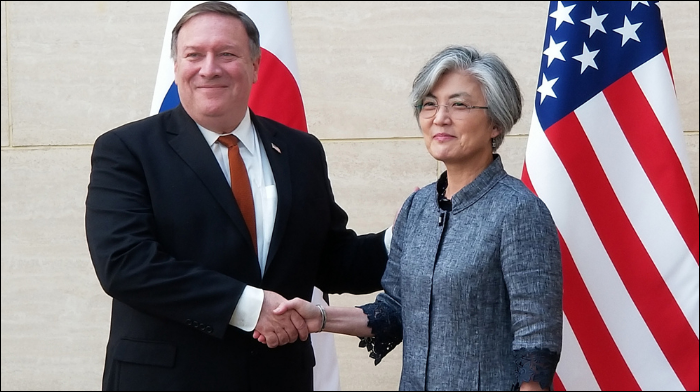 The Republic of Korea's (ROK) foreign ministry on Saturday expressed regret over the cancellation of US Secretary of State Mike Pompeo's visit to the Democratic People's Republic of Korea (DPRK).

The ministry said in a statement that the ROK side was sorry for Pompeo's "delayed visit" to the DPRK.

The statement said it would be significant to continue to look for ways to make talks between the DPRK and the United States contribute to the common goal of the Korean Peninsula's complete denuclearization and the permanent peace settlement.

It came after US President Donald Trump tweeted that he had asked Pompeo not to visit the DPRK at the moment.

"Secretary Pompeo looks forward to going to North Korea (DPRK) in the near future," Trump tweeted. "In the meantime, I would like to send my warmest regards and respect to Chairman Kim. I look forward to seeing him soon," he added.

Following the cancelled visit, ROK Foreign Minister Kang Kyung-wha had a phone conversation with Pompeo, who explained in detail to the top ROK diplomat why the visit was delayed, according to Seoul's foreign ministry.

Kang told Pompeo that it was sorry for the "delayed visit" as the international community expected a lot from it, proposed to continue efforts in denuclearizing the peninsula and build a permanent peace while maintaining a dialogue momentum.

The ministry said the ROK would take the appointment of Stephen Biegun as the new special US envoy to the DPRK as an opportunity for strengthening consultations further with the United States.

Pompeo said Thursday that he and Biegun would travel to Pyongyang next week "to make further diplomatic progress towards our objective."

The top US diplomat had visited the DPRK three times in April, May and July, respectively.

Trump said on August 20 that he would "most likely" meet with top DPRK leader Kim Jong Un for a second time, and he believed Pyongyang had taken specific steps toward denuclearization.

In a joint statement issued after the June 12 DPRK-US summit in Singapore, Trump committed to providing security guarantees for the DPRK, while Kim reaffirmed his firm and unwavering commitment to a complete denuclearization of the peninsula.