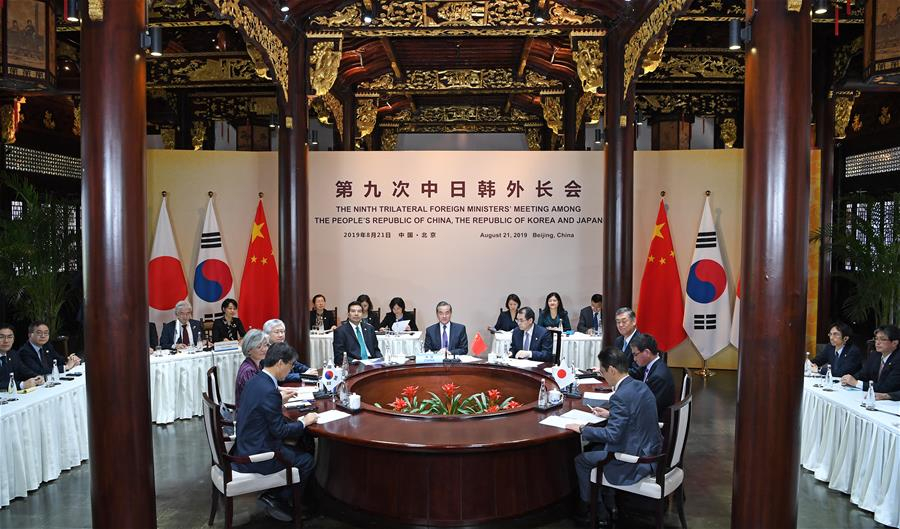 The one-on-one meeting will mark the first such talks in more than a year between the two leaders amid tit-for-tat escalations of trade and historical disputes. They only briefly talked for 11 minutes in Bangkok during the ASEAN Summit in November, and only shook hands during G20 Osaka summit in June.

Ties between Japan and South Korea have plunged to their lowest point in decades since South Korea's courts last year ordered Japanese firms to pay compensation for forced labor during Japan's colonial rule of the Korean Peninsula between 1910 and 1945.
Tokyo says the issue was settled by a 1965 treaty, which saw Tokyo pay Seoul some 500 million U.S. dollars under the banner of "economic cooperation."
The feud however, continued to spill over into trade and security issues. Both sides tightened export restrictions and removed each other from their preferential lists of trade partners.
The spat also spread to security areas, with Seoul cancelling the General Security of Military Information Agreement (GSOMIA), before deciding to extend the pact with Japan just hours before the deal was due to expire.
The recent high-level exchanges between the two countries also failed to make substantial progress on easing bilateral tensions.

Loss at both sides

The trade dispute between South Korea and Japan is feared to damage both economies as the two countries are intertwined in the global chain of supply and demand.

In some sectors, the bilateral interdependence was deeper. Take the semiconductor sector as an example, as of 2017, Japan exported 10.4 billion U.S. dollars of chip-related products to South Korea, accounting nearly one fifth of Japan's total export to South Korea.

The number of South Korean visitors to Japan also plunged 65.1 percent to 205,000 in November, following a 65.5 percent decline in October and a 58.1 percent drop in September.

The trade dispute has raised fears about security cooperation.

The long-time relationship between U.S., Japan and South Korea has already been hit as U.S. President Donald Trump wants the countries to pay more for U.S. troops stationed there.

Although South Korea last month decided to retain an intelligence-sharing pact with Japan, after threatening to end it, the tensions between Tokyo and Seoul further lead them to be at odds.

"The Japanese and South Korean friends should follow the concept of understanding each other heart to heart. We, the Chinese people, treat others the same way as we expect to be treated," Wang said.

"We hoped two sides can seriously accommodate each other's concerns, handle differences in a constructive manner, and find proper solutions to problems."

This year marks the 20th anniversary of China-Japan-South Korea cooperation. Despite hiccups, cooperation among the three countries has reaped tangible results.

According to a Chinese saying, "Neighbors wish each other well, just as family members do." Similarly, China wishes to see stable Japan-South Korea ties because the three neighbors are important countries in the region, and stable trilateral ties can bring peace and stability to the region and the world at large.