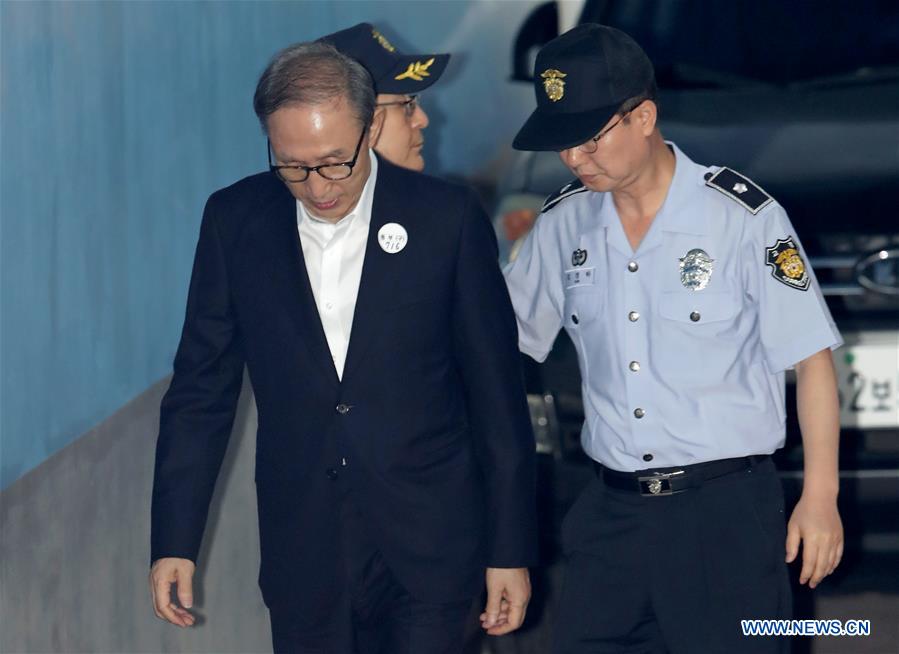 It is effectively a life sentence: unless he is pardoned or paroled, the 78-year-old will not leave jail until 2036, when he would be 95.

He left his residence in southern Seoul in a black car, passing a throng of journalists and former aides, but did not say anything and was not visible through the vehicle's darkened windows.

The scene illustrated the polarisation of South Korean politics: one of Lee's supporters held a sign reading "President Lee saved the economy and raised the national profile", and others saluted him with clenched fists.

But only a few steps away on the other side of a police line stood a man with a different message: "Apologise to the people".

Lee was taken to the Seoul Central District Prosecution's Office for a registration process before being transferred to a prison in the east of the capital.

His return to jail means all four of South Korea's living former presidents are either behind bars or have served jail terms -- often as a result of investigations begun under successors who are political rivals.

Lee was first convicted in late 2018 and originally jailed for 15 years. He served nearly a year before an appeals court increased his penalty but granted him bail pending a further appeal to the nation's highest court.

A self-made man who was appointed head of a major construction firm at age 35 before entering politics, Lee served as president from 2008 to 2013.

He steered the country through the global financial crisis and won its bid for the 2018 Winter Olympics, but was criticised by opponents for undermining the nation's democratic standards and freedoms of speech.

Lee will serve his time in a 13-square-metre cell normally occupied by six or seven inmates, according to media reports, that comes with amenities such as a television, foldable mattress, drawer and toilet.

A prison officer will be assigned to monitor him full time.

Lee's conservative successor Park Geun-hye is currently serving 20 years in jail for bribery and abuse of power after being ousted in 2017 over a corruption scandal that prompted massive street protests.

At 10 square metres, her cell at a different correctional facility south of Seoul is slightly smaller.

Another former leader, the liberal Roh Moo-hyun, took his own life after being questioned in a corruption probe involving his family -- an inquiry that took place during Lee's presidency.

Roh was the political mentor of incumbent President Moon Jae-in, who served in the Blue House throughout Roh's presidency, including a year as his chief of staff.