South Korea is ramping up efforts to strengthen preemptive and prevention measures against climate change after its capital was hit by two days of record-breaking rainfall and deadly floods. 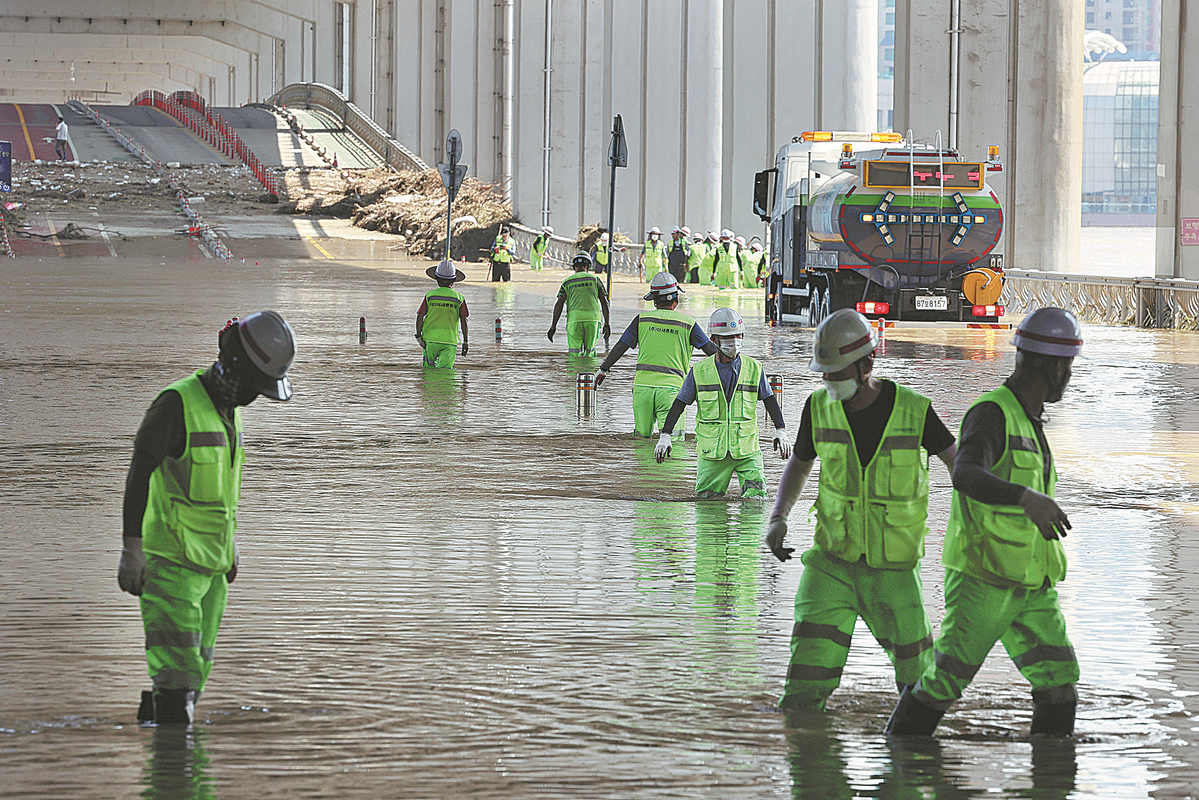 Prime Minister Han Duck-soo told a meeting of the Cabinet on Tuesday that it was necessary to set up a new disaster response system to deal with natural disasters caused by climate change, reported Yonhap News Agency.

"In line with environmental changes, safety management standards must be drastically strengthened and boldly reorganized to effectively prepare for major disasters in the future," he added.

The downpours, which President Yoon Suk-yeol described as the heaviest since weather observations began 115 years ago, started on Aug 8, swamping roads and subway stations in Seoul and its surrounding areas.

The floods left 14 people dead and six missing as of Aug 14, with thousands of homes damaged, according to the country's Central Disaster and Safety Countermeasures Headquarters.

Two Chinese nationals lost their lives in the floods, the Chinese Foreign Ministry said on Aug 10.

Various measures have been discussed since last week. For instance, the government is working to designate areas that were hit during the heavy rains as a special disaster zone. Such areas will be eligible for government financial support in recovery work and victim relief funds, among others.

The Seoul city government also announced that it will spend $1.15 billion over the next decade on the construction of deep underground rainwater storage facilities in flood-prone areas, which will be fitted with large-scale drainpipes with a diameter of about 10 meters each at a depth of 40 to 50 meters below ground.

Seoul Mayor Oh Se-hoon also said the city aims to phase out all forms of basement apartments over the next two decades after four people drowned in the semi-underground homes.

"The big concern would be that we may have a similar one (of extreme weather) in the near future due to climate change," said Kim Young-oh, a professor in the Department of Civil and Environmental Engineering at Seoul National University.

Kim said the urban water cycle should be based on understanding a hybrid of natural and man-made systems. "The drainage system which has been made by humans is crucial, especially for the urban system, and so a systematic approach based on engineering is important," Kim said.

Chung Suh-yong, an international studies professor at Korea University, said he hopes the government can come up with other necessary mitigation measures to tackle climate change, including improving weather forecasting, promoting renewables and restructuring buildings to improve energy efficiency.

"More importantly, the government needs to set up a stronger coordination body, hopefully at the presidential level," Chung said.

Chung said he hopes leaders of both countries can form serious understandings on the necessity of environmental cooperation.

In the face of increasing extreme weather events and greenhouse gas emissions, cooperation in mitigation measures can include renewable energy, nuclear safety and carbon markets, Chung said. "I do hope that the spirit of cooperation can be realized in Northeast Asia … by strengthening the cooperation between South Korea and China."