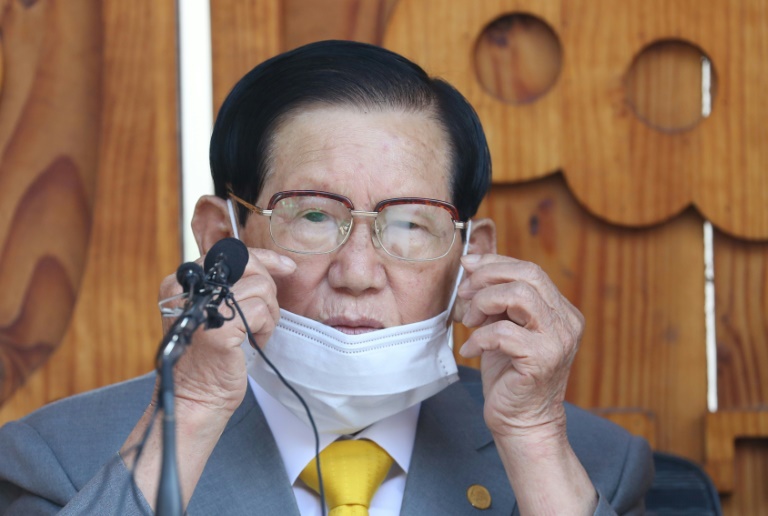 Seoul city authorities have filed a murder complaint against Shincheonji leader Lee Man-hee for failing to cooperate in containing the epidemic. (Photo: AFP)

The elderly leader of a secretive South Korean sect linked to more than half the country's 4,000-plus coronavirus cases knelt before the cameras Monday to apologise for the spread of the disease.

Shincheonji head Lee Man-hee's plea for forgiveness came after Seoul city authorities filed a murder complaint against him for failing to cooperate in containing the epidemic.

South Korea's case numbers -- the largest total anywhere outside China -- are expected to rise further as authorities carry out checks on more than 266,000 people associated with the Shincheonji Church of Jesus, which is often condemned as a cult.

"I would like to offer my sincere apology to the people," said Lee, his voice breaking.

"Although it was not intentional, many people have been infected," the 88-year-old said, twice bowing his head to the floor before reporters in Gapyeong.

"I seek the forgiveness of the people."

Lee is revered by his followers as the "Promised Pastor" who has taken on the mantle of Jesus Christ and will take 144,000 people with him to heaven on the Day of Judgement, which he will usher in within his own lifetime.

A 61-year-old female member developed a fever on February 10 but attended at least four services in Daegu -- the country's fourth-largest city with a population of 2.5 million and the centre of the outbreak -- before being diagnosed.

At worship Shincheonji members sit close together on the floor and pray extensively in what critics say creates an ideal environment to spread viral infections.

Lee -- whose organisation says he has tested negative for the virus -- insisted that the group was "actively cooperating with the government".

"At churches, the leader of the church is like a parent and its members are the children," he said, pausing occasionally to wipe tears from his eyes as protesters shouted abuse.

"What parent would stand by and watch when there is such a scary disease that could even lead to death? Wouldn't they try to fix it?"

Seoul's city government has asked prosecutors to press charges including homicide against Lee and 11 other leaders after the sect was accused of submitting false lists of its members to authorities.

For its part, the group says members face social stigma and discrimination if their beliefs become publicly known, dissuading some from responding to official inquiries.

Seoul mayor Park Won-soon added on his Facebook page: "If they had actively taken early measures, we could have prevented the explosive rise of COVID-19 cases in Daegu and North Gyeongbuk province and the deaths of several people."

Around 60 percent of the infections are linked to Shincheonji.

The country's central bank has warned of a contraction in the world's 12th-largest economy in the first quarter, noting the epidemic will hit both consumption and exports.

Scores of events have been cancelled or postponed over the contagion and the education ministry said school and kindergarten breaks, which had already been extended nationwide to next Monday, will be lengthened by a further two weeks.