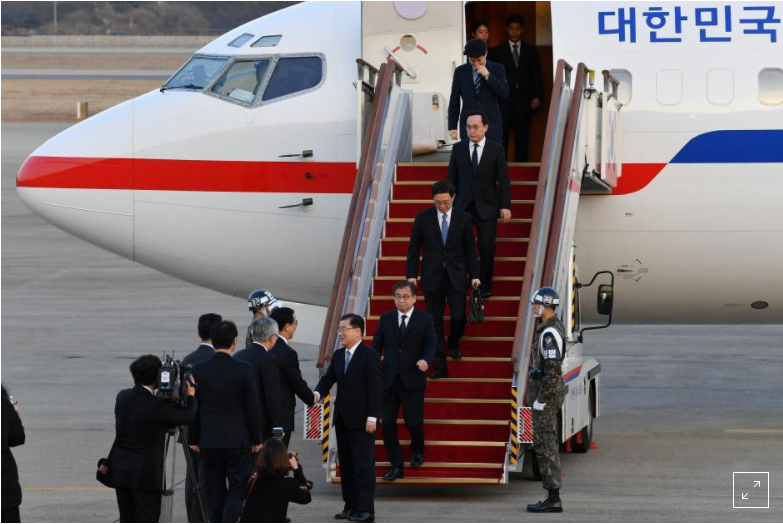 Two senior South Korean envoys arrived in Washington on Thursday to brief American officials on their meeting with North Korean leader Kim Jong Un, while the U.S. secretary of state said that though “talks about talks” might be possible with Pyongyang denuclearization negotiations were likely a long way off.

Speaking during a trip to Ethiopia, Secretary of State Rex Tillerson said South Korea was keeping the United States “well informed,” but suggested actual negotiations between Washington and Pyongyang were a ways off.

“In terms of direct talks with the United States ... we’re a long ways from negotiations,” Tillerson told a news conference in Addis Ababa.

“We just need to be very clear-eyed and realistic about it,” Tillerson added. “I think the first step ... is to have talks, have some kind of talks about talks, because I don’t know yet, until we are able to meet ourselves face to face with representatives of North Korea, whether the conditions are right to even begin thinking about negotiations.”

Tillerson also reiterated previous calls for African states to cut ties with North Korea. North Korea has more than a dozen embassies on the continent. The Trump administration has said that Pyongyang earns hard currency from arms deals with African governments and the trafficking of wildlife parts from Africa.

Monday’s meeting with Kim Jong Un was the culmination of a series of North-South contacts that have helped ease fears of war in a standoff over Pyongyang’s development of nuclear missiles capable of hitting the United States.

In another sign of lingering tensions, the two Koreas will not march together at the opening ceremony of the Winter Paralympics, as they did at the Olympics last month in South Korea, because they cannot agree on a united flag that erases islands disputed with Japan, officials said.

Tensions over North Korea rose to their highest level in years in 2017, and the Trump administration has warned that all options are on the table, including military ones, in dealing with Pyongyang, which has pursued its weapons programs in defiance of ever tougher U.N. sanctions.

Signs of a thaw emerged this year, with North and South Korea resuming talks and North Korea attending the Winter Olympics. During the Pyongyang talks this week, the two Koreas agreed to hold their first summit since 2007 in late April.

South Korean President Moon Jae-in has said sanctions should not be eased for the sake of talks and that nothing less than denuclearization of North Korea should be the final goal for talks.

China’s foreign minister called on the United States and North Korea to hold talks as soon as possible.

“Although light has already become visible at the end of the tunnel, the road ahead will not be smooth sailing,” foreign minister Wang Yi told a news briefing in Beijing on Thursday.

A senior U.S. administration official said no decision on the possibility of the United States joining a summit of North and South Korea was expected to be made at this week’s meeting with McMaster. Those discussions would be conducted in private among U.S. officials, the source said.