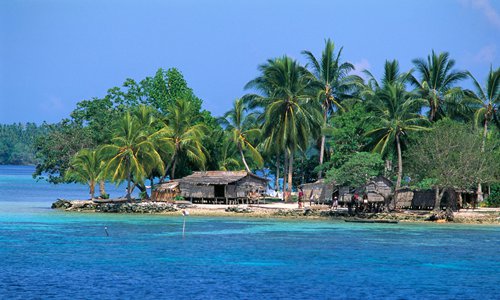 A village in the Solomon Islands File (Photo: IC)

China is increasing its cooperation with island countries in the South Pacific Ocean after the Solomon Islands formally established diplomatic relations with the People's Republic of China in Beijing on Saturday.

US reaction
A planned meeting between US Vice President Mike Pence and Solomon Islands Prime Minister Manasseh Sogavare later this month has been canceled as the US said it was "disappointed" by the Pacific island nation cutting diplomatic ties with the island of Taiwan and forging ties with China.
At a Senate committee hearing on Wednesday, David R. Stilwell, the State Department's assistant secretary for East Asia and the Pacific, criticized China's actions to "bully" Taiwan through "economic coercion" and "poaching" diplomatic partners.
Chen Hong, a professor and director of Australian Studies Center, East China Normal University, told the Global Times on Sunday that this reflects US anxiety and fear as the Pacific region is part of the US Indo-Pacific strategy and the US worries about China's influence in the region.
"China has no intention to compete with the US or Australia as it just wants to engage in economic development of the region, which will benefit China as well," Chen said.
"It is a process of trade and investment, which is economic activities, but the US twists it as a competition."
Bright future
After formally establishing diplomatic ties, the Solomon Islands and China will see closer political and economic cooperation, which will also benefit the regional development of the entire Pacific islands, according to Chinese observers.
Even prior to the establishment of official diplomatic relations, China was the largest export destination for the Solomon Islands with 65.2 percent of the country's merchandise exported to China in 2017, according to the official statistics. Now, deepened ties will offer greater business and growth opportunities to the Pacific Island country and help create more development synergies in the region, said analysts.
In 2018, China-Solomon Islands trade reached 2 billion Solomon Islands dollars ($242 million), with China the largest single trading partner of the country in total trade volume.
China has already started to increase cooperation with countries in the region under the BRI framework. Chinese President Xi Jinping met leaders of Pacific island countries with diplomatic relations with China in Port Moresby, the capital of Papua New Guinea in November 2018, to exchange views on bilateral ties and pragmatic cooperation.
At the meeting, President of the Federated States of Micronesia Peter Christian said the BRI was quite important for regional development and his country was willing to expand cooperation with China in trade and tourism, as well as to further communicate and coordinate on tackling climate change.
Song Wei, an associate research fellow at the Ministry of Commerce's Chinese Academy of International Trade and Economic Cooperation in Beijing said the China-proposed BRI can promote connectivity in the South Pacific region.
Song noted China has assisted Tonga and Samoa with Modern Ark 60 airliners and Y12 aircraft, giving South Pacific island countries a boost of regional connectivity.
Song said as Taiwan only used its money and aid to maintain "ties" with Pacific island countries, it has totally detached from trade and economic activities and will not last long.
"Without investment and trade, no commercial capitals can be brought in to form a whole industrial chain. When the role of aid cannot be brought into full play and no commercial capitals are mobilized, aid programs can hardly sustain," Song told the