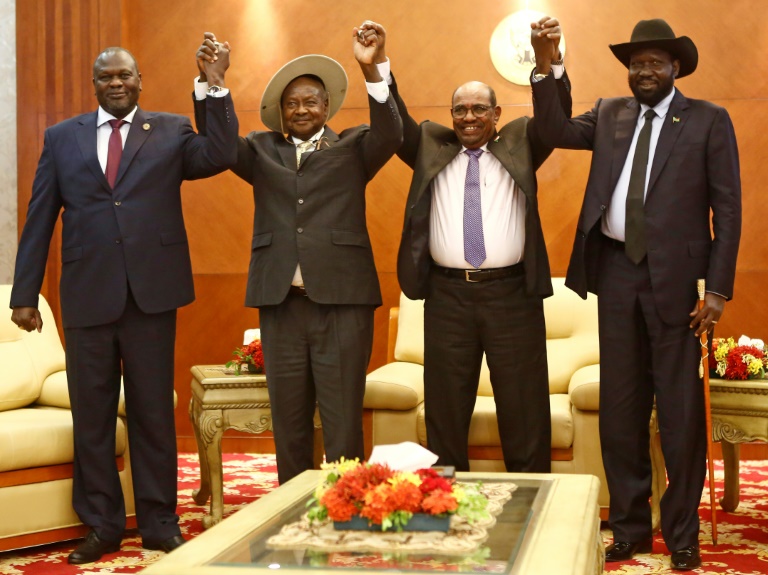 "All parties have agreed on a permanent ceasefire within 72 hours," Sudan's Foreign Minister Al-Dierdiry Ahmed announced following talks in the Sudanese capital.

Kiir and Machar then signed the document, called the "Khartoum Declaration," in the presence of Sudanese President Omar al-Bashir.

"This day was expected by our people in South Sudan and it has now come," Kiir said after the signing of the agreement.

Machar said the ceasefire must finally lead to the "ending of the war".

The latest push for peace in South Sudan comes as part of a fresh bid launched by East African leaders and with the two factions facing a looming deadline to avert UN sanctions.

The declaration, a copy of which was made available to AFP, stipulates that the ceasefire arrangement includes disengagement, separation of forces in close proximity, withdrawal of all allied troops, opening of humanitarian corridors, and the release of prisoners of war and political detainees.

The agreement also allows members of the African Union and the Intergovernmental Authority on Development (IGAD) -- an East African regional grouping that has been pushing peace efforts -- to deploy forces to supervise the ceasefire.

"The security arrangements that shall be adopted shall aim at building national army, police and other security organs of an all-inclusive character that shall be free from tribalism and ethnic affiliations," the document says.

"Policies shall also be agreed upon for the disarmament of civilians all over the country."

Wednesday's declaration says that a transitional government will be formed within 120 days which will govern the country for a period of 36 months.

"During the transitional period the country shall be prepared for national elections," the document says.

"It is agreed that the election shall be open for all political parties and shall be free and fair."

The Khartoum negotiations came after a round of talks brokered by Ethiopian Prime Minister Abiy Ahmed last week in Addis Ababa faltered.

The Khartoum talks commenced on Monday and are scheduled to last for two weeks, after which the next round of negotiations will be held in Nairobi. A last round of dialogue is expected in Addis Ababa.

South Sudan's war, which has killed tens of thousands of people and displaced about four million, broke out in December 2013 when Kiir accused his then-deputy Machar of plotting a coup, dashing the optimism that accompanied independence from Sudan just two years earlier.