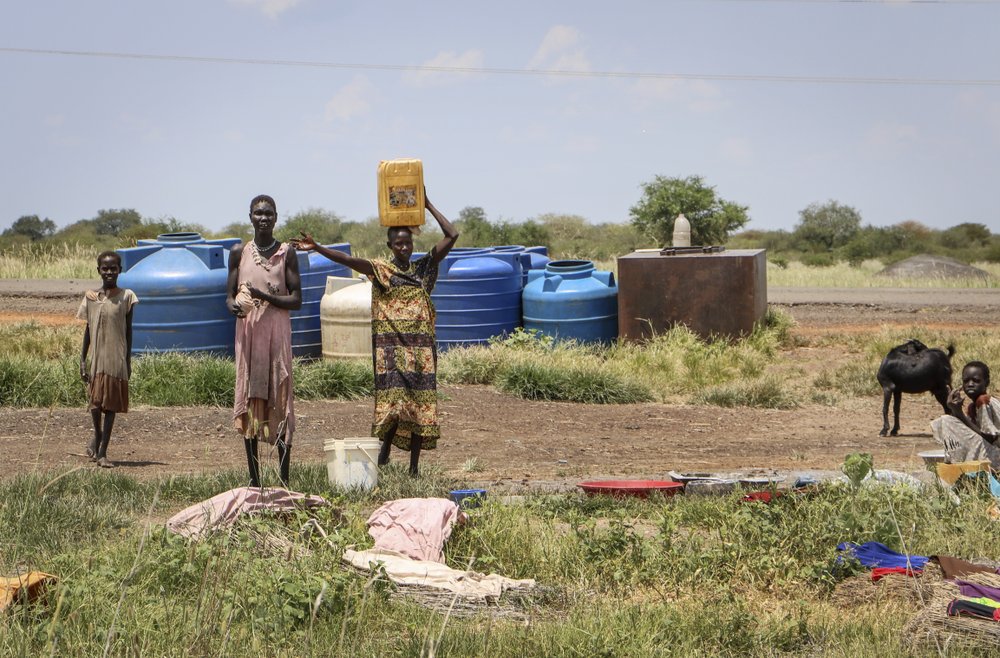 In this photo taken Monday, Oct. 1, 2018, residents stand by the side of the road after fetching water, between Melut and Paloch town, in South Sudan. (Photo: AP)

The oil industry in South Sudan has left a landscape pocked with hundreds of open waste pits, the water and soil contaminated with toxic chemicals and heavy metals including mercury, manganese, and arsenic, according to four environmental reports obtained by The Associated Press.

The reports also contain accounts of “alarming” birth defects, miscarriages and other health problems among residents of the region and soldiers who have been stationed there. Residents also describe women unable to get pregnant.

Abui Mou Kueth’s infant son, Ping, was born with six fingers on both hands, one stunted leg, a deformed foot and kidney swelling.

“I was shocked the first time I saw the baby,” she said, cradling him in her arms.

She said he was not able to breastfeed and needed special formula. “I am worried about his future.”

The AP obtained the reports and supporting documents from people with close knowledge of the oil operations, one of whom works in the industry. The reports have never been released publicly.

The reports, which date as far back as 2013, were presented to the oil companies and South Sudan’s ministry of petroleum but subsequently buried, according to four people with close knowledge of the oil operations and the documents. All spoke on condition of anonymity for fear of their safety.

“South Sudan is running one of the dirtiest and poorest managed oil operations on the planet,” said Egbert Wesselink, the former head of a European coalition of more than 50 non-profit organizations focused on the impacts of the country’s oil sector. He worked on the oil fields in South Sudan before the country gained independence in 2011, and now works with PAX, a Dutch-based human rights organization.

“I don’t think there’s a single major industrial operation on earth that’s getting away with this,” he said.

There’s been no clear link established between the pollution and the health problems.

But community leaders and lawmakers in the oil-rich areas in Upper Nile and Unity states -- in the northeast and north of the country bordering Ethiopia and Sudan -- accuse South Sudan’s government and the two main oil consortiums, the Chinese-led Dar Petroleum Operating Co. and the Greater Pioneer Operating Co., of neglecting the issue and trying to silence those who have tried to expose the problem.

An AP reporter looking into the pollution and health issues was detained and questioned by government officials and government security forces working on behalf of the oil companies.

Neither company responded to multiple requests for comment on the reports, and did not answer detailed questions sent by email and text message from the AP.

“People are dying of unknown diseases,” said Simon Ngor, a pastor with a church in Melut, a small village in the oil-rich area of Upper Nile state. “The oil company says they’re working on it but I don’t think they actually are.”

The environmental and health problems are particularly damaging in South Sudan, a country that was only established nine years ago and shortly after was torn apart by civil war and famine. It’s among the poorest nations in the world and depends on its oil industry to survive.

The oil-rich area around Paloch, a city in Upper Nile state, is dotted with exposed pools of toxic water. A chemical junkyard in Gumry town, about 45 minutes from Paloch, was strewn with overflowing containers of black sludge that seeped into the ground and were surrounded by toxic waste when an AP reporter visited in September 2018.

The air inside the yard, which was unsecured and easy to enter, smelled overwhelmingly of chemicals. Rows of stacked shipping containers lined the inner perimeter of the yard, some were left open exposing bags of what appeared to be chemicals. Many containers had labels stipulating there were hazardous toxins inside. Trash was heaped in various corners of the plot.

The junkyard caught fire in May and has yet to be cleaned up, according to a resident who visited in September and spoke on condition of anonymity for fear of their safety.

The AP interviewed more than two dozen people in Paloch and the surrounding areas, and residents reported alarming health problems that echoed those found in the buried reports: babies with birth defects, miscarriages and people dying of unexplained illnesses.

Dr. Bar Alony Wol, the county health department director, pulled out his phone in his small one-room office in Melut and pointed to a photo of a baby girl born in September 2018 with her intestines outside of her body. A few years ago, he said, he saw a baby born with no head.

“We’re losing children,” said Nyaweir Ayik Monyuak, chairman of the Women’s Association in Melut. The 43-year-old lost two children of her own between 2008 and 2011.

She and a dozen other women were crowded on a tattered L-shaped sofa in a dimly lit shed that serves as a meeting place in Melut. One by one, the women took turns telling their harrowing stories.

Six had lost babies in the last 10 years. And all of them knew someone who had given birth to a child with deformities, had struggled to conceive or had miscarriages.

When some of the shyer women were hesitant to speak up, the more vocal ones encouraged them to share their experiences.

Ajok Ayel said she lost a child in 2010 and hasn’t been able to get pregnant since.

“I’d like to leave if possible,” said Jessica Uma, 34, who said she had two miscarriages in 2012 and 2013 and used to get body rashes when showering.

When doctors removed Ngor Maluol’s dead daughter after she miscarried in 2018, the baby’s head was concave and looked as if she’d been hit, she said.

Many women can’t even get pregnant, Monyuak said.

Many of the residents said the health problems got worse after people started drinking water from white containers that began appearing several years ago in markets and along roadsides.