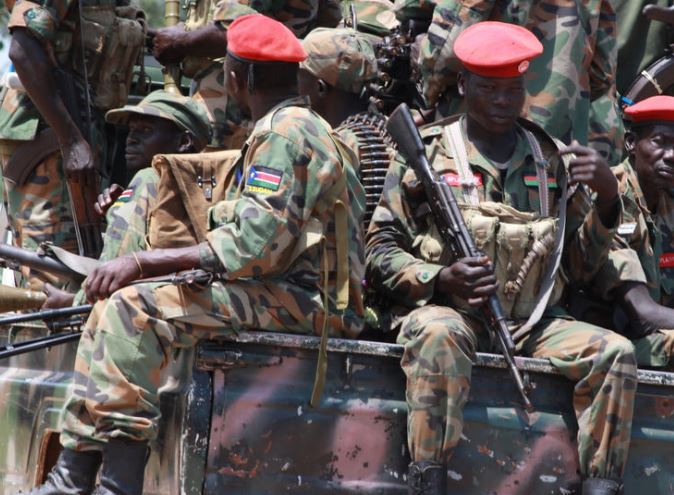 ADDIS ABABA, Aug. 21 (Xinhua) -- Parties to South Sudan's September 2018 peace deal have been urged to expedite the process of troop movements to cantonment sites and barracks towards an immediate realization of the agreed Necessary Unified Forces.

The urgent call came as the parties to the September 2018 revitalized peace deal gathered in Ethiopia's capital Addis Ababa on Wednesday to find solutions to the stalemate in the implementation of the revitalized accord on the resolution of the conflict in South Sudan.

Augostino Njoroge, Interim Chairperson of the Reconstituted Joint Monitoring and Evaluating Commission, urged the parties to the peace deal to "expedite the process of troop movements to cantonment sites and barracks, selection and immediate training of the Necessary Unified Forces."

The process of troop movements to cantonment sites and barracks envisaged to form a unified South Sudanese army of 83,000 personnel to support implementation of the 2018 peace deal.

"The Parties should give direction and timelines on the operationalization of several cantonment sites across the country and in respective states as a start and within the remaining Pre-Transitional Period," Njoroge added.

The commission also urged the parties to expedite "the reconstitution of the Disarmament, Demobilization and Reintegration (DDR) Commission and make it respective to the needs of those who shall not qualify for selection into the Necessary Unified Forces."

Signatories to South Sudan's fragile peace agreement on May 3 agreed to extend the formation of the transitional government by six months following delays in the implementation of the pact over unresolved issues.

The ongoing meeting came following the East African bloc, Intergovernmental Authority on Development (IGAD), summoned the parties to the 2018 peace deal for a meeting in Addis Ababa to find solutions to the current stalemate amid the approaching deadline for the six-month Pre-Transitional Period.

According to Njoroge, the Ceasefire and Transitional Security Arrangements Monitoring and Verification Mechanism has already verified 23 cantonment sites and 10 barracks as suitable for cantonment and barracking of forces.

"Regrettably, however, none of the designated sites is operational, and not a single former combatant has been registered," Njoroge said.

"This has also meant that training of forces has yet to begin. Logistical constraints remain a huge hurdle to overcome," he added.

Njoroge, however, said that recent reports of initial food supplies for cantonment and barracks being delivered by the Joint Defense Force to some of the cantonment sites as an "encouraging" development in South Sudan's peace process.

Noting that the current "supplies are not enough as they will soon run out unless there is steady and predictable supply of necessary commodities," Njoroge also welcomed the interest exhibited by the region and the AU's High-Level Ad Hoc Committee for South Sudan towards support for operationalization of cantonment, including pledges for in-kind support to make that happen."

He also stressed that the DDR Commission "is critical to address the needs of former combatants who shall not qualify for selection of training with the Necessary Unified Forces and who will require a dignified reintegration into civilian life."

The world's youngest nation descended into civil war in late 2013. The conflict eventually created one of the fastest-growing refugee crises in the world.

The UN estimates that about four million South Sudanese have been displaced internally and externally.

A peace deal signed in August 2015 collapsed following renewed violence in the capital, Juba in July 2016.

In September 2018, South Sudan's conflicting parties signed a final peace deal in Ethiopia after negotiations brokered by the Sudanese government and mandated by IGAD.

Under the new peace deal, opposition leader Riek Machar, along with four others will once again be reinstated as Kiir's deputy.