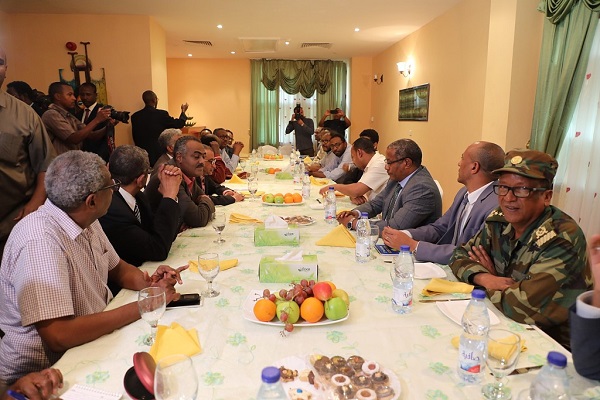 Ethiopian Prime Minister Abiy Ahmed (4th R) speaks during the mediate talks with a delegation of the Alliance of Freedom and Change, after ruling military council intervened the pro-democracy demonstrators that left more than 100 people dead, at the Ethiopian Embassy in Khartoum, Sudan on June 07, 2019. (Photo: VCG)

"If there is anything that Sudanese agreed upon, we are there to help them and support them for that. A delegation from Juba is underway to go and see and give support there," he added.

The military council is locked in deadlock with the opposition group, the Freedom and Change Alliance as they seek to agree on the structure of transitional government.

Ahmed's initiative had included formation of a sovereignty council composed of 15 members, including seven military and seven civilian ones in addition to an independent civilian to be appointed via consultation between the TMC and the opposition alliance.

Makol also regretted the suspension of Sudan from the African Union (AU) as it plays a key role in the region.

"We are telling Sudan to quickly put their house in order for them to regain their seat in the AU, this is because a vital member like Sudan is also responsible for other countries," revealed Makol.

He noted Sudan's role is vital in South Sudan's peace process as the latter has leverage over some of the parties to the peace deal signed in September 2018, in the Ethiopian capital after former President Omar al-Bashir mediated the peace deal under auspices of the Inter-Governmental Authority on Development (IGAD).