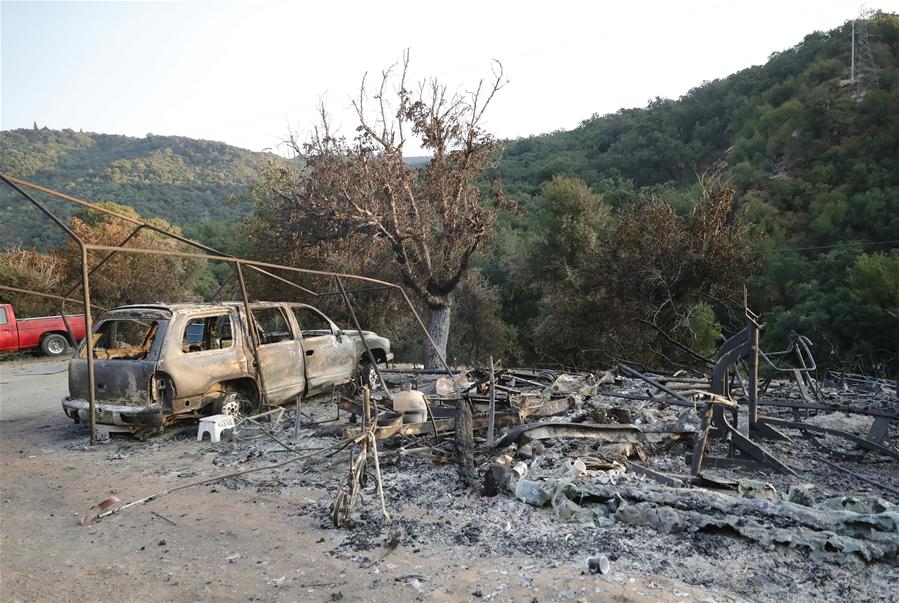 Wreckage is seen after being burned by a wildfire that swept through Lake county, California, the United States, on Aug. 9, 2018. (Photo: Xinhua/Dong Xudong)

LOS ANGELES, Aug. 10 (Xinhua) -- A Southern California wildfire continues to rage and is threatening more populated areas despite frantic efforts to contain it.

Flames filled the sky with smoke as more than 1,200 firefighters were battling the blaze to keep it from reaching foothill communities.

The fire has forced over 21,000 people to evacuate their homes since it broke out on Monday. Several school districts canceled classes due to fire warnings and unhealthy air quality.

California Governor Jerry Brown declared a state of emergency Thursday in Orange and Riverside counties as the aggressive wildfire swept through ridges and mountains.

Forrest Gordon Clark, 51, was arrested earlier this week after he allegedly sent a text to a volunteer fire chief about two weeks ago saying this place "is going to burn."

He was charged by Orange County authorities with felony arson and making criminal threats -- among other counts -- in connection with the Holy Fire.

Clark appeared in court Friday, saying "it's all a lie" as the judge read the charges.

Dozens of wildfires are raging in California, with the one dubbed the Mendocino Complex burning more than 100 miles (about 161 km) north of Sacramento declared the most destructive fire in the state's history.