Relief and heartache await those starting to return home to a Southern California wildfire zone. 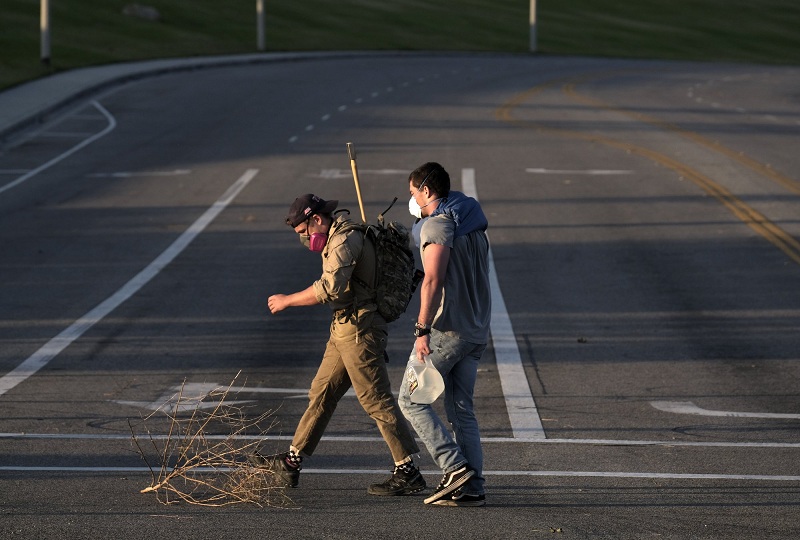 Malibu residents Rocky and Henry who only give their first name walk to a friend's house to help clear brush and help with fire relief along the pacific coast highway in Malibu, Calif., on Sunday Nov. 11, 2018. (Photos: AP)

Eager to know the status of his house, 69-year-old Roger Kelly defied evacuation orders Sunday and hiked back into Seminole Springs, his lakeside mobile home community in the Santa Monica Mountains north of Malibu.

His got the thrill of finding his house intact. But some a half-block away were laid to waste, as were dozens more, and virtually everything on the landscape around the community had been turned to ash.

"I just started weeping," Kelly said. "I just broke down. Your first view of it, man it just gets you."

The community where Kelly and his wife have lived for 28 years and raised two children was among the hardest hit by the so-called Woolsey fire that broke out Thursday, destroying at least 177 homes and leaving two people dead.

Despite strong Santa Ana winds that returned Sunday, no additional structures were believed to have been lost, meaning many would return in the coming week to find their home as Kelly did, authorities said.

Santa Ana winds, produced by surface high pressure over the Great Basin squeezing air down through canyons and passes in Southern California's mountain ranges, are common in the fall and have a long history of fanning destructive wildfires in the region.

Huge plumes of smoke still rose in the fire area, which stretches miles from the northwest corner of Los Angeles' San Fernando Valley to the Malibu coast.

Airplanes and helicopters swooped low over hills and canyons to drop loads of fire retardant and water. 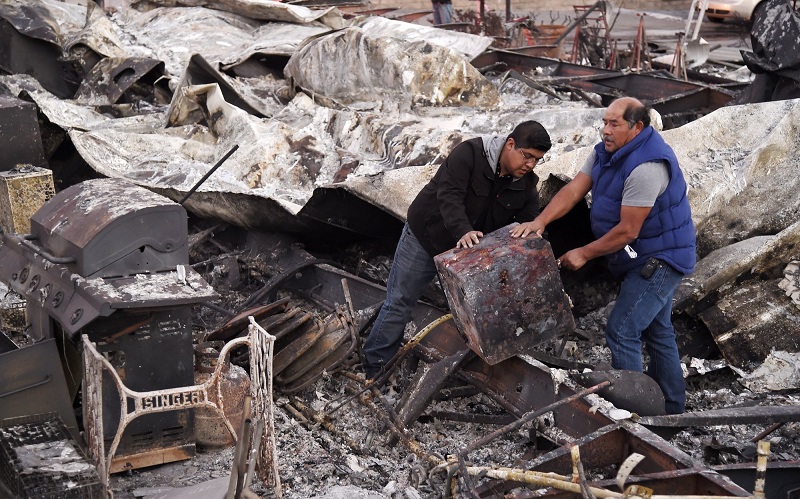 A one-day lull in the dry, northeasterly winds ended at midmorning and authorities warned that the gusts would continue through Tuesday.

The lull allowed firefighters to gain 10 percent control of the Woolsey fire, which has burned more than 130 square miles (335 square kilometers) in western Los Angeles County and southeastern Ventura County since Thursday.

Los Angeles County Fire Chief Daryl Osby stressed there were numerous hotspots and plenty of fuel that had not yet burned, but at sunset he said there had been huge successes despite "a very challenging day."

The count of destroyed homes was expected to increase when an update is reported Monday. Osby noted that a November 1993 wildfire in Malibu destroyed more than 270 homes and said he would not be surprised if the total from the current fire would be higher.

The fire's cause remained under investigation but Southern California Edison reported to the California Public Utilities Commission that there was an outage on an electrical circuit near where it started as Santa Ana winds blew through the region.

SoCal Edison said the report was submitted out of an abundance of caution although there was no indication from fire officials that its equipment may have been involved. The report said the fire was reported around 2:24 p.m. Thursday, two minutes after the outage.

Venture County Fire Chief Mark Lorenzen hadn't heard about the Edison report. "It wouldn't surprise me" if it turns out that winds caused equipment failure that sparked a fire, he said.

The two dead were severely burned, their bodies discovered in a car on a long residential driveway on a stretch of Mulholland Highway in Malibu, where most of the surrounding structures had burned. Authorities said investigators believed the driver became disoriented and the car was overcome by fire. 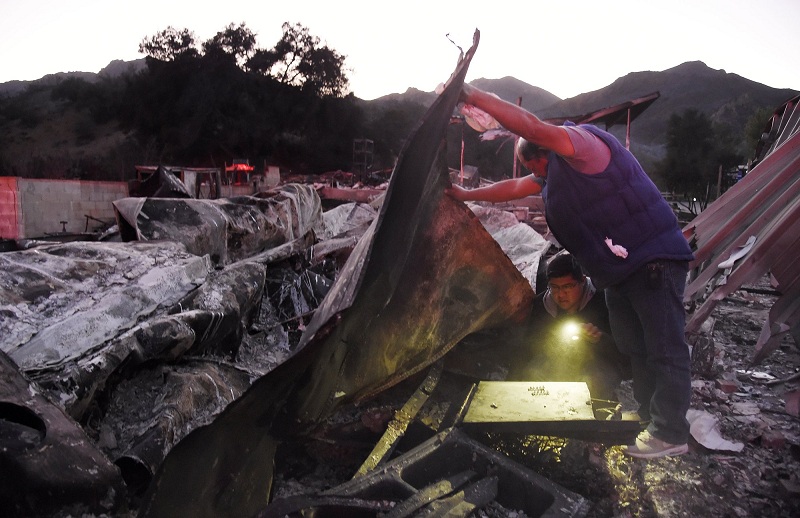 The deaths came as authorities in Northern California announced the death toll from a massive wildfire there has reached 29 people, matching the deadliest fire in state history.

Progress was made on the lines of smaller fire to the west in Ventura County, which was 70 percent contained at about 7 square miles (18 square kilometers), and evacuations were greatly reduced. But thousands remained under evacuation orders due to the Woolsey fire.

Also injured was a well-known member of the Malibu City Council. Councilman Jefferson "Zuma Jay" Wagner was injured while trying to save his home, which burned down, Councilman Skylar Peak told reporters Sunday.

The extensive celebrity community within Malibu wasn't spared. Singer Robin Thicke and actor Gerard Butler and were among those whose homes were damaged or destroyed.

Spot fires continued to occur late Sunday afternoon near the Malibu campus of Pepperdine University, where 3,500 students were sheltering in place. The university said it was closing Malibu campus and its Calabasas campus to the north until Nov. 26 but classes would be remotely administered online and through email.

But fire officials say fire behavior has changed statewide after years of drought and record summer heat that have left vegetation extremely crisp and dry. That change has impacted the ability to move firefighting resources around the state. 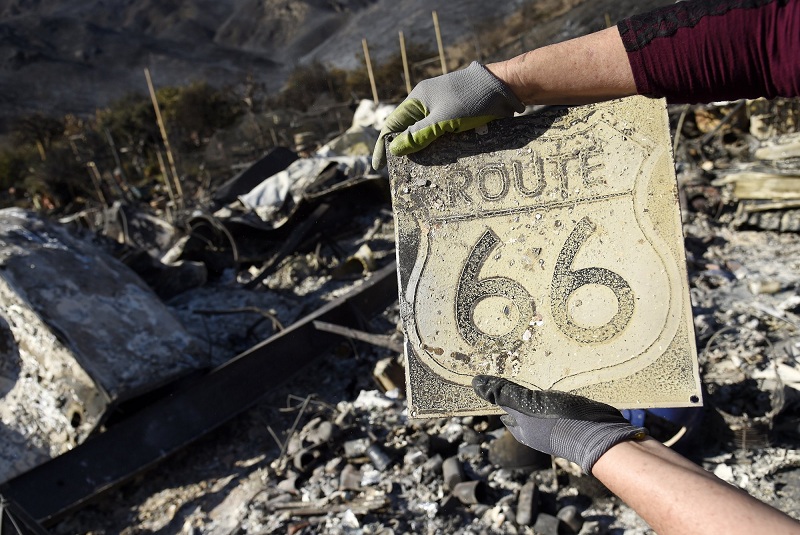 Donna Phillips shows a charred Route 66 sign she found among the possessions of her friend Marsha Maus, Sunday, Nov. 11, 2018, after wildfires tore through the Seminole Springs Mobile Home Park in Agoura Hills, Calif. Maus has been a resident of the neighborhood for 15 years.

With the devastation and loss of life in the Northern California fire, "it's evident from that situation statewide that we're in climate change and it's going to be here for the foreseeable future," he said.

Cover image: A firefighting DC-10 makes a fire retardant drop over a wildfire in the mountains near Malibu Canyon Road in Malibu, Calif. on Sunday, Nov. 11, 2018.