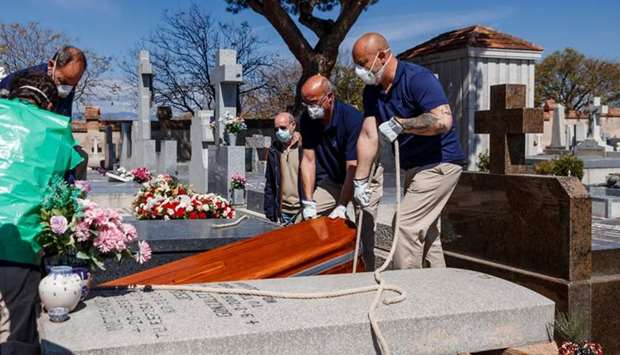 Spain confirmed another 812 deaths in 24 hours from the coronavirus on Monday, bringing the total number of deaths to 7,340, according to health ministry figures.

It is the first decline in the number of deaths in a 24-hour period since Thursday in Spain, which has the world's second most deadly outbreak after Italy. Spain recorded 838 virus deaths on Sunday.

The number of confirmed cases in Spain has now reached 85,195 -- after the one-day increase of 8.0 percent.

However, officials have pointed to a slower growth rate for both deaths and confirmed cases and expressed hope that the peak of the outbreak was approaching.

The percentage increase in the number of deaths on Monday over the previous day was of 12.4 percent, less than half the increase of 27 percent recorded on Wednesday.

Spain imposed a near-total nationwide lockdown on March 14 to try to curb the spread of the virus, banning people from leaving their homes except to go to work, buy food and medicine or care for a sick relative.

Prime Minister Pedro Sanchez on Saturday announced even stricter lockdown measures which will force all non-essential workers in the nation of around 47 million residents to stay home for the next two weeks.