Spain faces the challenge of welcoming the 123 children without families who arrived on Sunday at the port of Valencia in east of Spain, in the rescue operation of the ship Aquarius. 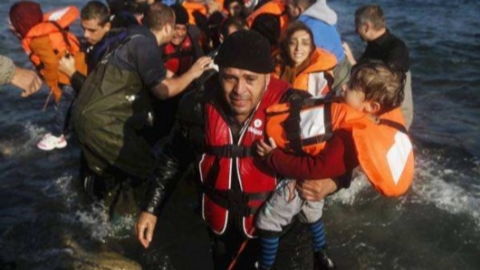 "They are facing a double drama, but it is true that the children have a number of very important resources with several NGOs so that they can integrate perfectly, "the head of health emergencies of the Red Cross Andalusia, Esther Gomez, said in an exclusive interview with Xinhua.

"We work a lot with children and the Red Cross is for their rights and so they do not miss anything", she said.

After disembarking in the Spanish port after more than a week stranded on the high seas, Spain now welcomes these children with the challenge of offering them a parental role that in many cases they do not have, because they come without parents.

"Many families can not pay the mafias a ticket for each family member, so they send their children," Gomez said.

The Red Cross will assume the guardianship of the 123 children who arrived on Sunday after leaving the coast of Libya seven days ago.

"Many come without their parents, but maybe with a friend of the father, of the mother, who can take care of them until their parents can come in. The non-governmental organizations also try to help," Gomez said.

After docking in the port of Valencia and passing security controls, migrants were examined by health professionals. They will now begin a journey in which the Spanish government will offer them a roof, education and food.

The feelings, Gomez explained, were good, although with exceptions due to the tension experienced during the trip.

"The truth is that they were all smiling, except two who were more frightened, who were brothers and did not want to separate, but apart from that, they were quite happy," she said.

The humanitarian ship Aquarius rescued 630 immigrants, among them the 123 children, off Libyan coast and was stranded in the Mediterranean Sea after Italy and Malta refused to let them dock. The Spanish government later offered a "safe harbor".