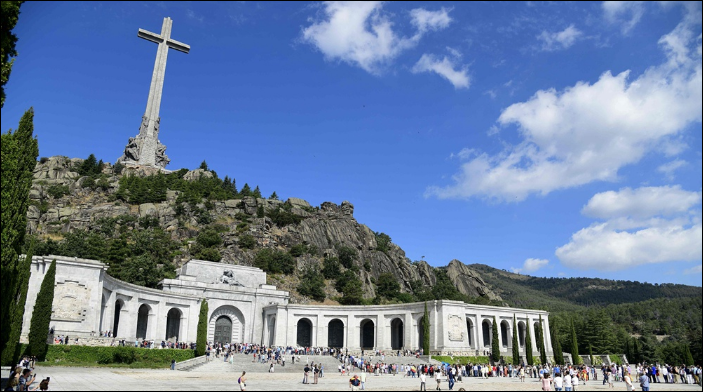 Spain's socialist government passed a decree on Friday allowing the exhumation of the remains of Francisco Franco from his vast mausoleum, a decision that divides Spaniards and has opened old wounds.

"We are celebrating 40 years of a democratic Spain, of a stable and mature constitutional order... and this is not compatible with a public tomb where we continue to glorify Franco," Deputy Prime Minister Carmen Calvo told a news conference following a cabinet meeting that approved the decree.

The exhumation, which is fiercely opposed by the late dictator's descendants, could take place at the end of the year, she said, declaring: "We can't lose a single minute."

The decree will still have to be approved in parliament.

Prime Minister Pedro Sanchez, who came to power in June after he ousted his conservative predecessor in a confidence vote, has made removing Franco's remains from the monument in the Valle de los Caidos (Valley of the Fallen) near Madrid, one of his priorities.

"As an established and European democracy, Spain cannot allow for symbols that divide Spaniards," Sanchez told public broadcaster TVE shortly after he came to power, saying such a mausoleum would be "unthinkable" in other European nations that had fascist dictatorships like Italy and Germany.

Sanchez's socialists say the goal is to convert the site into a place of "reconciliation" and memory for all Spaniards.

General Franco, who ruled Spain with an iron fist from the end of the 1936-39 civil war until his death in 1975, is buried in an imposing basilica carved into a mountain-face just 50 kilometers outside of Madrid with a 150-meter cross towering over it.

Built by Franco's government between 1940 and 1959 – in part by the forced labor of some 20,000 political prisoners – the monument holds the remains of around 37,000 dead from both sides of the civil war, which was triggered by Franco's rebellion against an elected Republican government.

It was long used as a place to pay tribute to Franco on the anniversary of his death, but that was stopped by a 2007 law.

Franco, whose nationalist forces defeated the republicans in the war, dedicated the site to "all the fallen" of the conflict in an attempt at reconciliation but critics say it is unacceptable to give such ostentatious recognition to a brutal dictator. And they say the families of the republicans were never told about their transfer to the valley.

Critics compare the situation with neighboring Portugal, where late dictator Antonio de Oliveira Salazar is buried in a municipal cemetery, or Italy, where former fascist leader Benito Mussolini lies in a family crypt.

Visitor numbers to the site have soared since the government announced its plans. Spain's national heritage agency that runs the monument said over 38,000 people visited in July compared to over 23,000 in June.