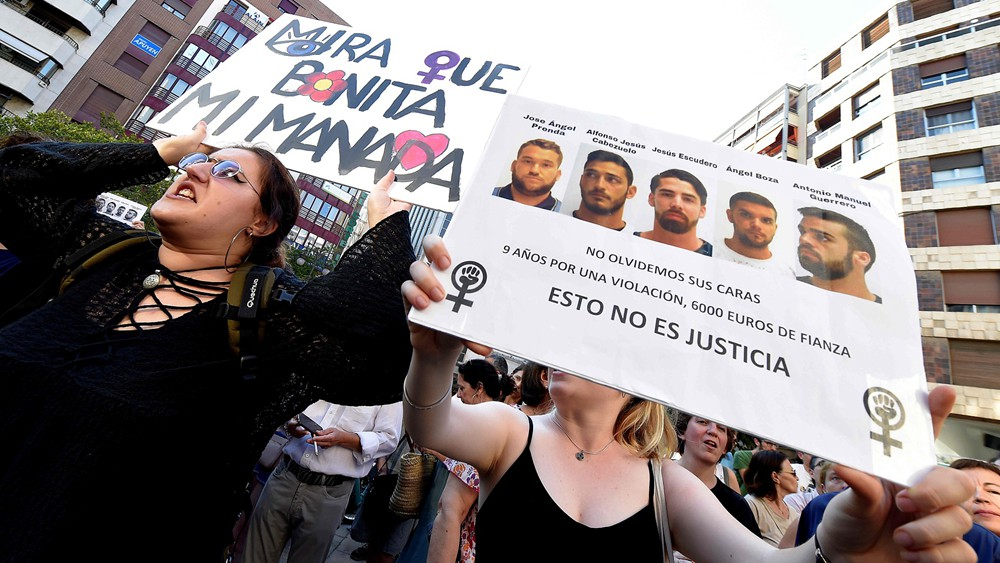 The five men, shown in a protester's placard in June 2018, who bragged about the 2016 attack in a WhatsApp messaging group titled "The Pack", were acquitted in April 2018 of sexual assault. (Photo: VCG)

One of five men convicted of sexually abusing a young woman in Spain in a case that sparked nationwide protests was arrested Wednesday for shoplifting and ramming security guards with his car, local police said.

The five, who bragged about the 2016 attack at the San Fermin bull running festival in the northern city of Pamplona in a WhatsApp messaging group titled "The Pack", were acquitted in April of sexual assault.

They were however sentenced to nine years for the lesser offence of sexual abuse, which under Spanish law implies there was no violence or intimidation.

The sentence sparked a fierce national debate about the country's rape laws as well as massive demonstrations.

The five men, who are in their late 20s and from the southern city of Seville, were freed on bail in June pending the outcome of an appeal of their sentence after spending almost two years in jail, prompting further protests in several cities.

Police in Seville said they had arrested the youngest of the five men, 26-year-old Angel Boza, after he was caught by security guards shoplifting a pair of sunglasses from a department store in the city.

The security guards then chased him to the car park, where he got into his car and tried to escape, police said in a statement posted on their Facebook page.

Boza faces charges for theft and assault and since his license had been suspended he is also accused of driving without one, police said.

The court that freed the group justified its decision at the time on the grounds that there was little chance of repeat offences since they have become famous faces in Spain.

It ordered the men to be put under judicial surveillance, report to a court three times a week, and have their passports withdrawn.

But shortly after their release another member of the group was caught seeking a new passport, sparking renewed outrage over the decision to release them.