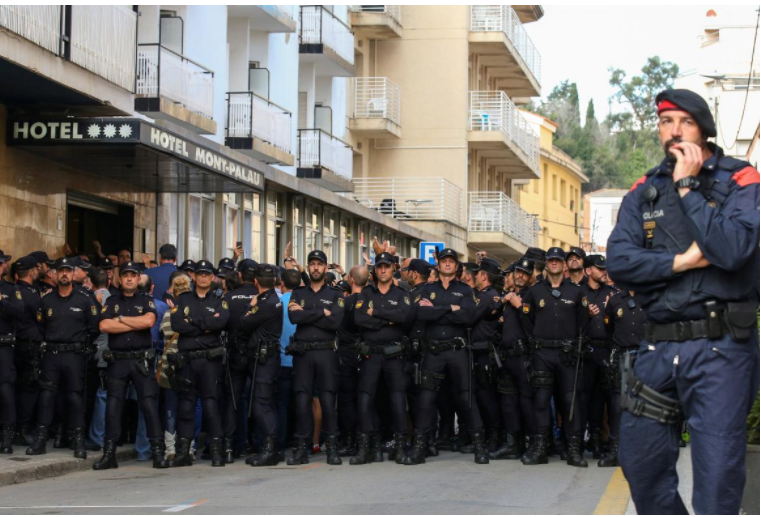 A Mosso d'Esquadra, or Catalan regional police officer, stands in front of a group of Spanish National Police officers who shout at protestors outside their hotel in Pineda de Mar, north of Barcelona, Spain, October 3, 2017. (Photo - Reuters - Albert Gea) 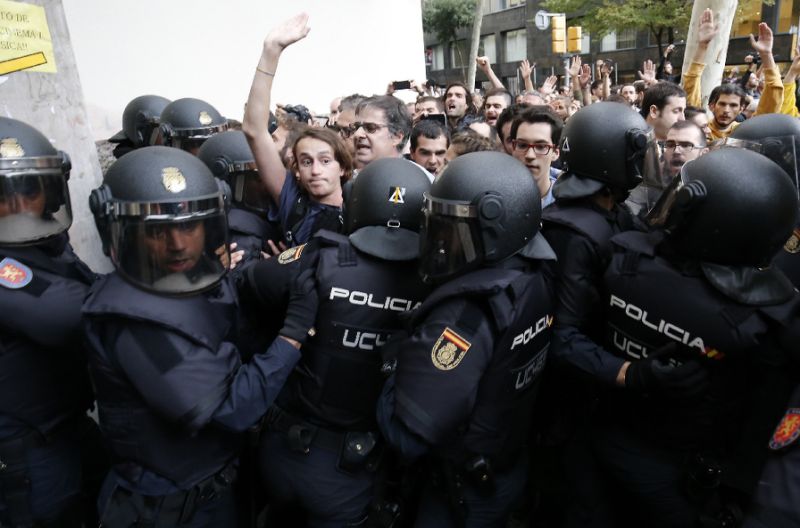 Spanish police are pursuing legal action against satirists for insulting the thousands of officers that were sent to Catalonia to prevent last month's banned independence referendum, the comedians have told AFP.

Eduard Biosca, a comedian on Catalonia's RAC1 radio station, told AFP on Friday that he had received a summons to appear in front of a judge in January after he used a satirical character to refer to police as "rats".

"The first 10,000 rats have arrived from Madrid," he said referring to a ferry carrying national police to Catalonia.

"I play someone who props up the bar, who's talkative and silly and gets everyone's back up," Biosca told AFP.

"I've done him for 10 years and I've never used him to speak in my voice on the show."

A police source confirmed it was pursuing a complaint of "insult" -- an offence punishable by a fine -- against Biosca.

It is the second such legal action against satirists in Catalonia since the October 1 referendum, where officers in Spain's national service received widespread condemnation for using force against peaceful civilians.

In an article on October 5, the satirical El Jueves review published a piece joking that Spanish officers "had used up all of Catalonia's cocaine reserves" while policing the vote.

Author Joan Ferrus appeared in front of a judge on Thursday, several days after his publisher Guillermo Martinez-Vela.

"It's a humourous article. All our readers know it's fiction and they don't see that we have insulted anyone," Martinez-Vela told AFP.

But a spokesman for Spain's main police union didn't see the funny side.

"Limits on free speech were surpassed", he said, adding that the article appeared within "a very delicate context" amid Catalonia's independence crisis.

Rights groups say police used excessive force to try and stop the referendum, including allegedly charging peaceful protesters without warning and using batons and shields to hit them.