MADRID, Feb. 25 (Xinhua) -- The first case of novel coronavirus on Spain's mainland was confirmed on Tuesday, bringing the country's total to five. 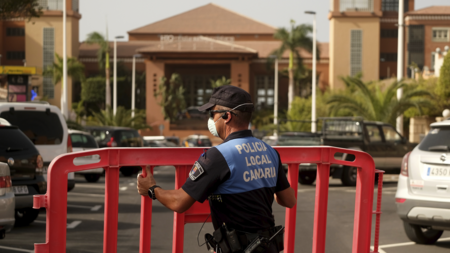 According to health authorities in the northeastern region of Catalonia, the patient is a woman who lives in the city of Barcelona and who had recently returned from a trip to the north of Italy where 10 people have died as of Tuesday and over 320 confirmed to be infected.

Joan Guix, secretary of public health at the Catalan Health Authority, explained that the woman had been admitted in the Hospital Clinic in Barcelona on Monday night with flu-like symptoms and was tested for the virus after saying that she had been in the north of Italy.

This is the third case in Spain confirmed in less than 48 hours, after a 69-year-old Italian doctor and his wife from the affected region of Lombardy were tested positive while on holiday on the island of Tenerife.

Around 1,000 residents in the Costa Adeje Palace Hotel on the south coast of Tenerife have been under quarantine.

"H10 Hotels has implemented all health and operational recommendations from the health authorities to ensure the safety and wellbeing of customers and employees," the hotel owner commented in a statement.

Tuesday also saw Spanish Prime Minister Pedro Sanchez chair the first meeting of an inter-ministerial committee his government has set up to deal with the crisis.

The government has pledged to act with "measure, transparency and proportionality" in the face of the coronavirus.

Two previous cases of COVID-19 in Spain were confirmed on the island of La Gomera in the Canary Island chain, and Mallorca, which is part of the Balearic Islands off the east coast of Spain. Both have made full recovery.