MADRID, March 3 (Xinhua) -- Spain's total COVID-19 deaths surpassed 70,000 on Wednesday after the Ministry of Health reported that 446 people had lost their lives to the virus in the past 24 hours. 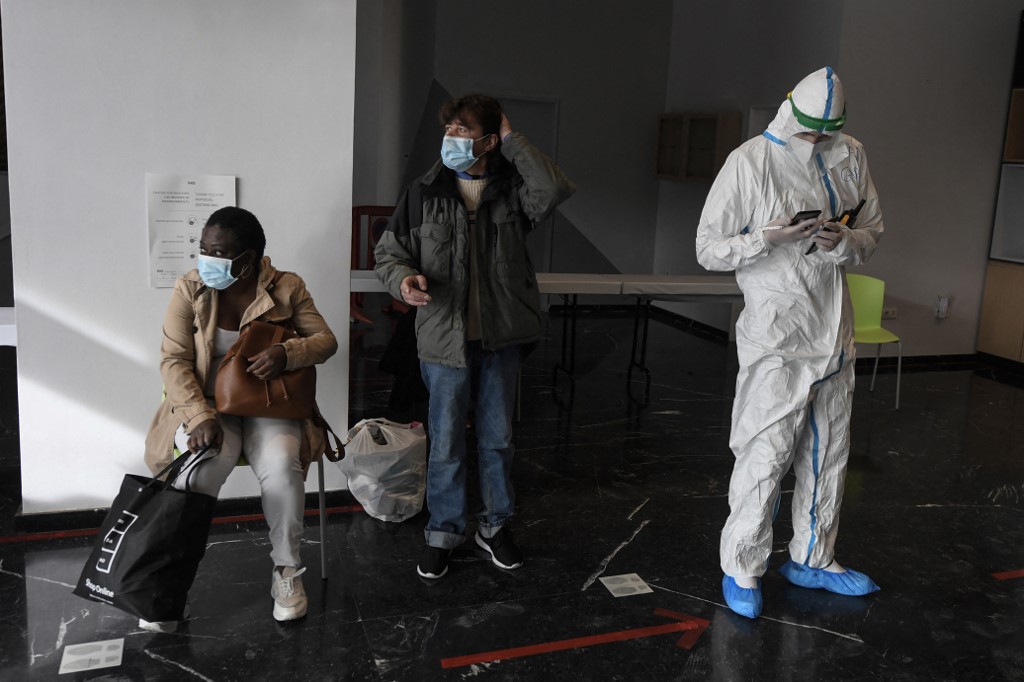 A healthcare worker stands next to a man and a woman at a hotel converted into a reception centre for Covid-19 patients in disadvantaged or vulnerable situations in Madrid on February 26, 2021. (File photo: AFP)

The total number of deaths has now risen to 70,247 since the start of the pandemic.

The ministry also reported 6,137 new cases of the coronavirus, which brought the national tally to 3,136,321. The caseload figure is actually lower than the 3,204,531 cases reported on Monday after a correction carried out on Tuesday which removed over 70,000 cases that had been counted twice.

The incidence of the virus continues to drop slowly and now stands at 159.57 cases per 100,000 inhabitants.

However, there are considerable differences among Spain's 17 Autonomous Communities, with the incidence standing at 50.58 per 100,000 in Extremadura in the west, 68.99 in the Balearic Islands and 76.39 in La Rioja in northern Spain, but at 261.32 in the Autonomous Community of Madrid, which is the only region still considered to be at "extreme risk."

The day also saw Spain pass the benchmark of injecting over 4 million doses of the COVID-19 vaccine after the ministry confirmed that 4,059,320 of the 5,583,955 doses of vaccine distributed to the Autonomous Communities since Dec. 27 last year have now been administered, with 1,287,002 people receiving two doses.

The Health Ministry is reported to hold talks with the regions next week to determine a strategy for the Easter holidays at the start of April, with most regions thought to be in favor of maintaining perimeter controls to limit movement in order to avoid a possible fourth wave of infections. he two countries."