MADRID, March 30 (Xinhua) - Fernando Simon, the Director of the Center for the Coordination for Health Emergencies at the Spanish Ministry for Health, Consumer Affairs and Social Services (CCAES), has tested positive for the coronavirus, the ministry confirmed on Monday. 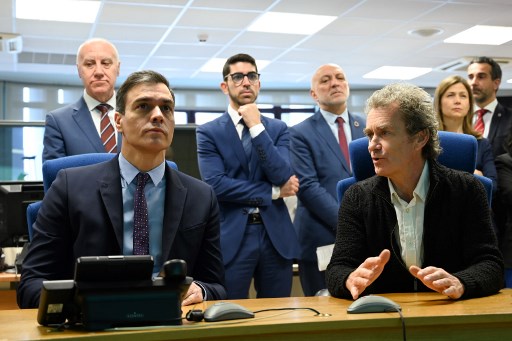 Spanish Prime Minister Pedro Sanchez (L) listens to Fernando Simon (R), director of Spain's Centre of Coordination of Health Emergencies, during a visit to the centre in Madrid on March 4, 2020 to discuss the COVID-19 coronavirus outbreak. (Photo: AFP)

According to the ministry, Simon, 57 years old, developed symptoms late on Sunday night and he was self-isolating at home.

Maria Jose Sierra from the CCAES on Monday replaced Simon in the daily press conference.

"He's tested positive. He showed a few degrees of fever, He's OK, but he's been isolated at home," said Sierra.

Simon's infection came after Laurentino Cena, the Operations Director of Spain's Civil Guard was confirmed to be infected last week.

As of Monday, the number of confirmed COVID-19 cases has risen to 85,195 with 7,340 deaths. But the trend now appears to be slowing down.

"Since March 25 we have seen a change in the tendency in the increment of daily cases. Since we began restrictions on movement, between March 15 to March 25, the rise in new cases was around 20 percent and since then it has dropped to 12 percent...it is what we expected," explained Sierra.