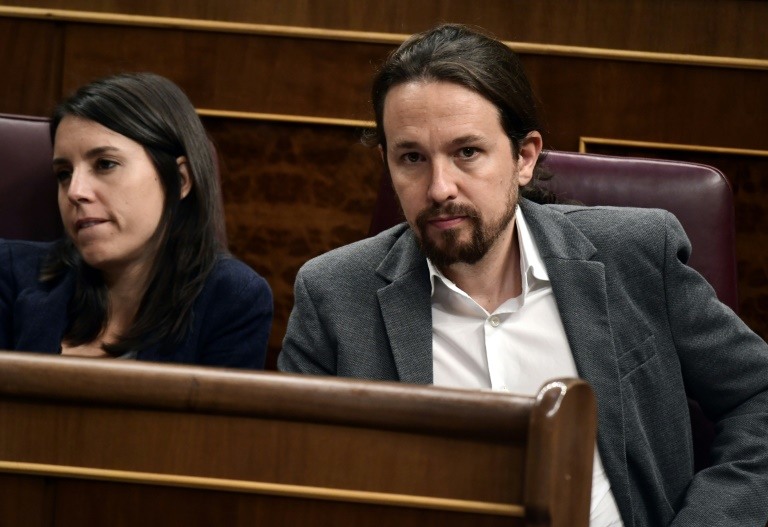 Podemos leader Pablo Iglesias and his partner, party spokeswoman Irene Montero, said it was up to party members to determine if their purchase of a luxury home had undermined their credibility (Photo: AFP)

The head of Spain's far-left party Podemos has put his leadership to a grassroots vote following an outcry over his purchase of a luxury home.

Pablo Iglesias has been under fire since he announced Wednesday that he had taken out a mortgage of 540,000 euros ($635,000) with his partner, Podemos parliamentary spokeswoman Irene Montero, to buy a chalet in Galapagar just north of Madrid.

The couple, who are expecting twins, said in a statement posted on Facebook that they bought the house because they wanted their children "to have as normal a childhood as possible".

But the move caused unease within the rank and file of Podemos, which was born in 2014 out of austerity fatigue and widespread anger at "la casta", as it calls the country's business and political elites.

Iglesias and Irene announced late on Saturday that they would ask Podemos members in a vote if they should carry on in their posts.

"When one's credibility is questioned, one can not hide and one must face the consequences," Iglesias told a news conference, flanked by Montero.

"It is up to the members of Podemos to decide if we are worthy of remaining in the posts which we occupy or if they want us to resign."

Iglesias' critics have recalled that in 2012 he criticised the economy at the time, Luis de Guindos, for buying a luxury home.

"Would you hand over the nation's economic policy to someone who spends 600,000 euros in a luxury penthouse?," Iglesias asked in a Twitter message on August 20, 2012.

Podemos will on Monday provide further details of the grassroots vote.

The party topped polls of voter intentions in 2015 but it has since lost support.

Podemos has 19.6 percent support, according to a poll released earlier this month by the Sociological Research Centre (CIS), making it Spain's fourth-most popular party.