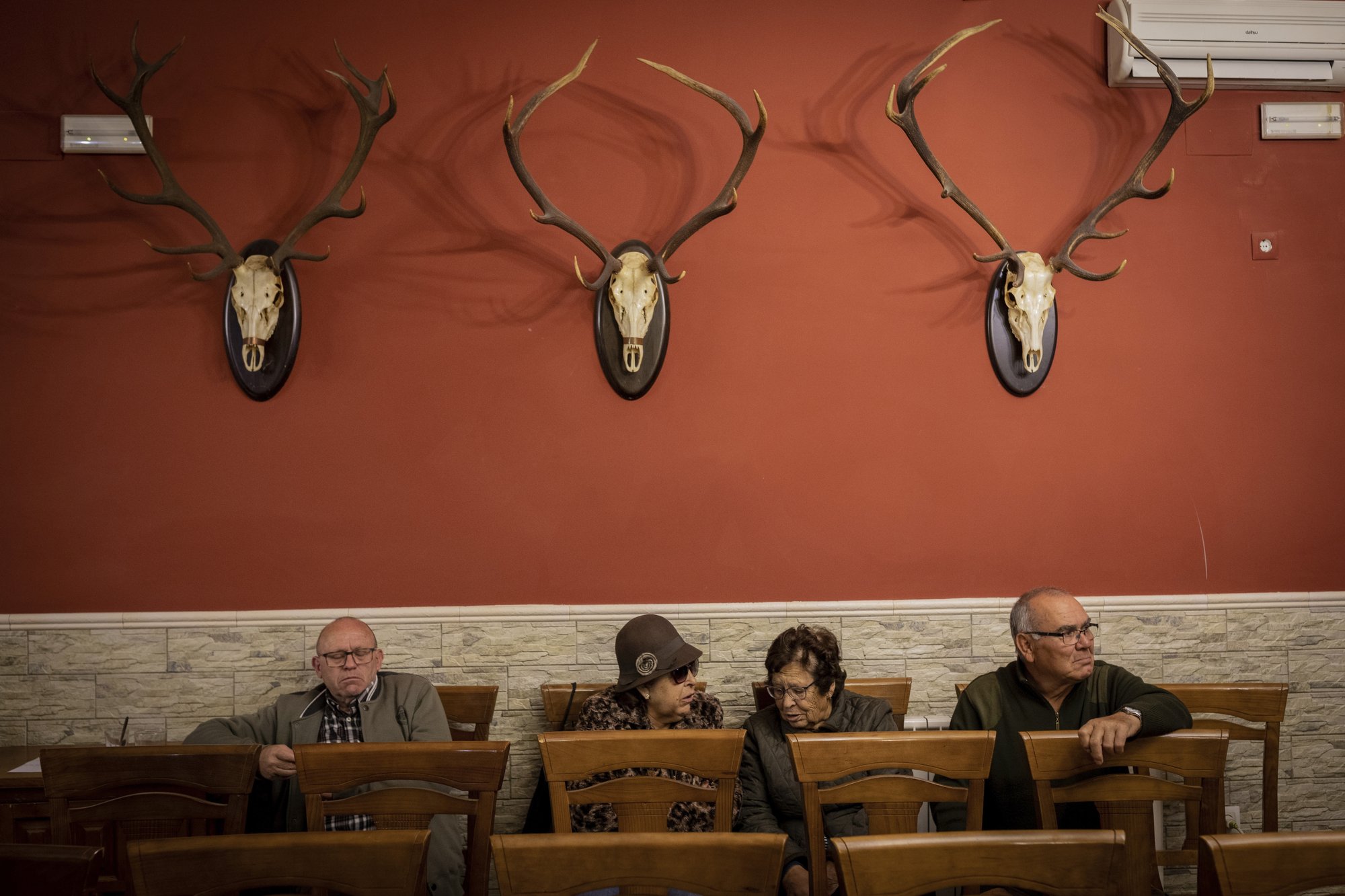 Villagers attend a meeting with Spanish far right party Vox at a bar in Brazatortas, on the edge of the Alcudia valley, Central Spain on April 10, 2019.  (Photo: AP)

Spanish politicians are swapping campaign buses for tractors, buddying up with hunters and inspecting home-grown tomatoes in Spain’s often-neglected rural regions as they hunt for votes in Sunday’s general election, one of the country’s most polarized votes in decades.

The ballot comes as Spain’s traditional bipartisan political landscape — which used to revolve around the center-left Socialists and the conservative Popular Party — has fractured into five main political parties, including a far-right populist newcomer. That has spurred a race for votes in Spain’s overrepresented hinterland, where nearly one-third of the seats in parliament’s lower house are up for grabs.

Spain’s electoral rules grant a bigger say in parliament’s lower house to provinces with shrinking populations. A few thousand votes in these areas can swing a win for one party or another, turning the “every vote counts” cliché into a reality for candidates far from the big cities.

That doesn’t mean these politicians are getting a warm welcome.

Marcy Jurado, 64, lives in central Spain’s Alcudia valley, surrounded by pastures dotted with holm oaks, with her husband and son, the only remaining residents in the village of La Bienvenida. She’s wary of politicians knocking on farmers’ doors.

“All I wish is that they don’t forget about us once the elections are over,” she said.

Socialist Prime Minister Pedro Sánchez is the politician most favored by the splintering of Spain’s right wing into three parties. But his ability to stay in office hinges not just on how well the front-running Socialist party does in the national vote but also on how his divided opposition performs. Sánchez or others will likely need the backing of other parties to form a coalition government, making the race for rural votes even more critical.

Spanish politicians across the political spectrum are seeking both photos of themselves in muddy boots and headlines promising more investments for rural jobs, better internet access and more local schools and health care centers.

Nestled at the top of a hill, La Bienvenida has gone from having 50 families only 20 years ago to seeing “for sale” signs on house after house. A 37-year-old dairy farmer is the breadwinner in the only inhabited house, and also Jurado’s only reason to stay.

“If my son loses his job, I’m done with it, I’ll leave,” said the retired truck driver. “The days are hard and long enough for somebody who enjoys company.”

Her wish list for lawmakers has two items: Make sure pensions keep up with inflation and create more jobs for the young.

At a state-of-the-art game preserve down the road, a provincial candidate from the far-right Vox party was telling people that his upstart party will unapologetically defend hunting against “lefties, ecologists and animalists who tell rural dwellers how to live their lives.”

Ricardo Chamorro, a lawyer, fell out with the Popular Party and embraced the nationalist populism of Vox, whose program echoes the “take back control” mantra of populist movements across the globe. The party vows to defend Spain from Muslims, communists and Catalan separatists, who held a defiant secession referendum in 2017, unleashing a wave of Spanish nationalism.

“We are committed to rural Spain, which sees the money flowing to richer areas that are being disloyal to the nation,” Chamorro said to applause from three dozen farmers who gathered under stuffed boar and deer trophies at a bar in Brazatortas, on the edge of the Alcudia valley.

Barring any last-minute surprises, Vox is poised to grab 29 to 37 deputies in Spain’s 350-seat national parliament on Sunday, a big splash for a party that only last year made its first big advance with a win in the regional election in Andalusia, a Socialist stronghold.

With nearly 400,000 voters in a country of 37 million, the rural Ciudad Real province is a mirror of national politics. In the last general election in 2016, three of the five deputies chosen here went to the Popular Party and two to the Socialists. This year, polls are predicting at least two seats for the Socialists and one for the Popular Party, with the remaining two up for grabs among four parties, including the center-right Citizens Party and the Vox party.

Only the anti-austerity Unidas Podemos party seems to be left out in the province, according to the latest polls. At the national level, Podemos could lose up to 15 deputies from rural areas in Sunday’s vote.

“It bothers me deeply when people (politicians) climb onto tractors in a forced manner,” she said. “It’s an insult to those who live here.”

What the Socialists want, she said, “is for anybody in Spain to have access to services in comparable quality conditions, no matter where they live. And that means more opportunities in rural areas.”

“It all comes down to how much taxes we want to pay and what are the services we want to have,” she said as she inspected a Manchego cheese business that exports to the U.S.

Fernández wants to boost women’s roles in the countryside, subsidize young farmers taking over old operations and ensure that farmers have access to water.

“There’s no future for the farmland without women or schools,” she said.

During two straight days of campaigning, Fernández and Chamorro listened to similar concerns. Tuberculosis tests were seen as too strict, forcing farmers to cull herds and lose money. Sheep ranchers had conflicts with laws on preserving natural spaces. The swelling numbers of wild boars and vultures were hurting livestock operations. All residents complained about too much administrative red tape, poor infrastructure, schools and clinics that were too far away, limited phone and internet services.

While Chamorro visited cattle farms and met with retirees, Fernandez toured a solar panel farm and a madeleine factory where three siblings have returned with university degrees to take over the family business.

“There was a time when all I wanted was to be away,” said Julián Arenas, whose muffin-making plant is now the biggest employer in Corral de Calatrava, a village of 1,200. “I’ve seen what’s out there and now I realize that, given the right setup, there are also plenty of opportunities here as well.”