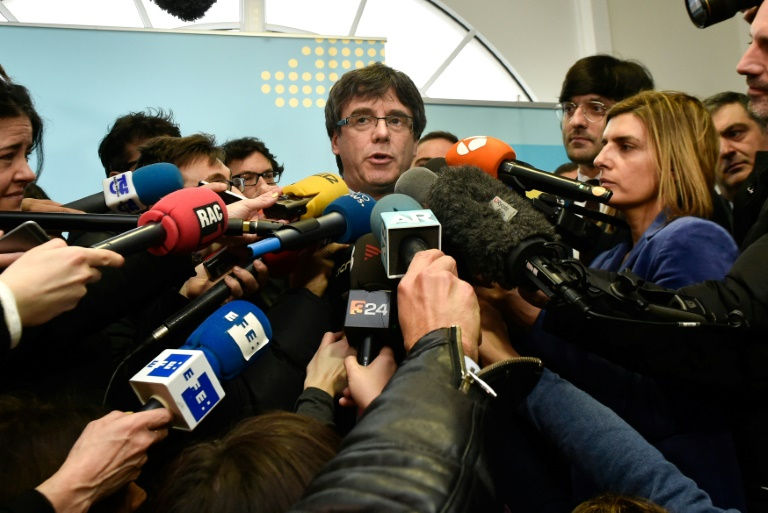 The Spanish government on Friday turned to the courts to try to stop Catalonia's ousted separatist leader Carles Puigdemont from returning to power despite facing arrest.

Puigdemont, who fled to Belgium after the Catalan parliament declared independence in October, was earlier this week chosen as its candidate to lead Catalonia again after December elections saw separatist parties win an absolute majority of seats.

Catalonia's regional parliament is scheduled to debate and vote on Tuesday whether to reinstall Puigdemont, who faces arrest for rebellion, sedition and misuse of public funds over his attempt to break Catalonia from Spain as soon as he comes back.

But Spain's conservative central government on Friday filed a legal challenge with the country's Constitutional Court against Puigdemont's bid to return to power, on the grounds that as a fugitive of justice, he cannot be elected.

"A person who is wanted in national territory for such serious crimes cannot try to be sworn in as head of the Catalan government without having faced up to his responsibilities with the law," Spain's Deputy Prime Minister Soraya Saenz de Santamaria said after announcing the appeal.

"The government must use every tool made available by the laws and the constitution to make sure that a fugitive, someone who is on the run from the law and the courts, cannot be illegitimately be sworn in."

The court will meet on Saturday to study the government's challenge. If it agrees to take up the case, the parliamentary session to swear in Puigdemont would be automatically suspended while the court considers legal arguments.

"If the speaker of the parliament obeys, he cannot call the investiture session," said University of Barcelona constitutional law professor Xavier Arbos.

The newly elected speaker of the Catalan parliament, Roger Torrent, said Puigdemont remains the sole candidate to head the new Catalan government although a final decision will be taken once the court makes it ruling.

"Everything is in the hands of Mr. Torrent. To obey or not," added Arbos.

Catalonia's ousted separatist government pushed ahead with an independence referendum on October 1 despite it having been banned by the Constitutional Court.