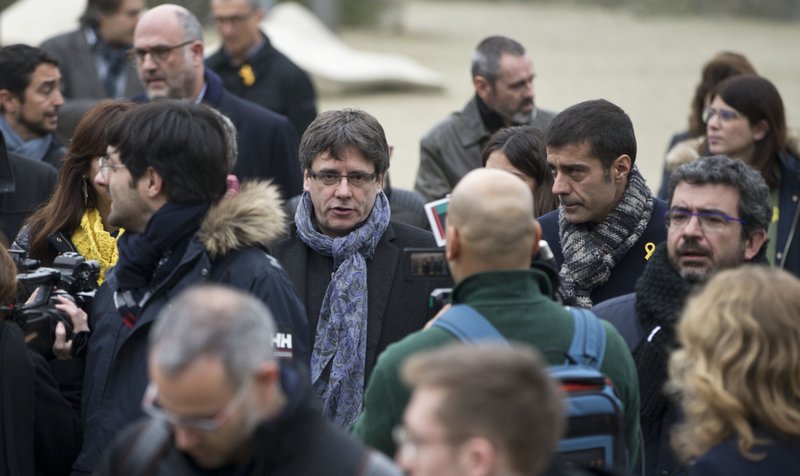 Former Catalan President Carles Puigdemont faced additional obstacles Monday in his attempt to stand for his old job from his bolt hole in Belgium.

Legal advisers told the Catalan parliament on Monday that Puigdemont can’t be sworn in unless he shows up in person in the chamber, while Spain’s prime minister vowed to maintain Madrid’s direct rule over Catalonia if the fugitive separatist politician tries to resume office from Brussels.

Monday’s developments complicate matters for Puigdemont, who had hoped to present his candidacy to Catalonia’s parliament by video or through a delegate. That way, he can avoid returning to Spain and being arrested. Puigdemont was re-elected a regional lawmaker during a parliamentary election last month after campaigning from Brussels.

After analyzing the law, Catalan parliament legal experts said Puigdemont cannot be sworn in as Catalan president via video link to Barcelona. One of the reasons they cited was that a candidate has to be able to debate directly with political parties, news agency Europa Press reported.

The region’s anti-independence opposition and Rajoy’s government have said they would take the matter to the Constitutional Court of Spain if lawmakers vote for Puigdemont as regional president. Rajoy also said Monday that the new president would have to be sworn into office in person, adding that the Spanish government would continue invoking constitutional authority to run Catalonia until that happens.

“It’s absurd that someone may intend to be a candidate to be the head of the regional government while being in Brussels and running away from Justice,” Rajoy said on Monday. “This is no longer just a judicial and political problem, this a problem of pure common sense.”

The new parliament is set to meet for the first time Thursday. An initial vote to pick Catalonia’s next president is likely to take place by the end of the month.

Much to Rajoy’s ire, secessionist parties again won the most seats in a Dec. 21 election the prime minister called under temporary takeover powers it assumed after removing Puigdemont’s government and dissolving the regional parliament following an illegal independence referendum.

Five regional lawmakers, including Puigdemont, have fled Spain and three more, including former Vice President Oriol Junqueras, are in jail facing possible charges of rebellion or sedition. Other former Cabinet members and parliamentary officials have been released from jail, but remain under investigation.

The Catalan parliament legal experts said the three in jail can delegate their vote to another person, but not the five currently fugitive in Belgium.

The parties that promote Catalan independence jointly hold 66 of the regional chamber’s 135 seats and also have support from four pro-independence, anti-establishment lawmakers.

The Catalan crisis, Spain’s most acute political crisis in decades, came to a head when separatist lawmakers declared independence Oct. 27 based on the results from an Oct. 1 referendum that Spanish courts had deemed illegal.

Puigdemont remains adamant about pushing ahead with forming a Catalan republic separate from Spain. However, nearly all of the elected lawmakers under investigation have pledged to act within the law from now on.

Polls consistently show that most Catalans want the right to decide the region’s future but are evenly divided over splitting from Spain.