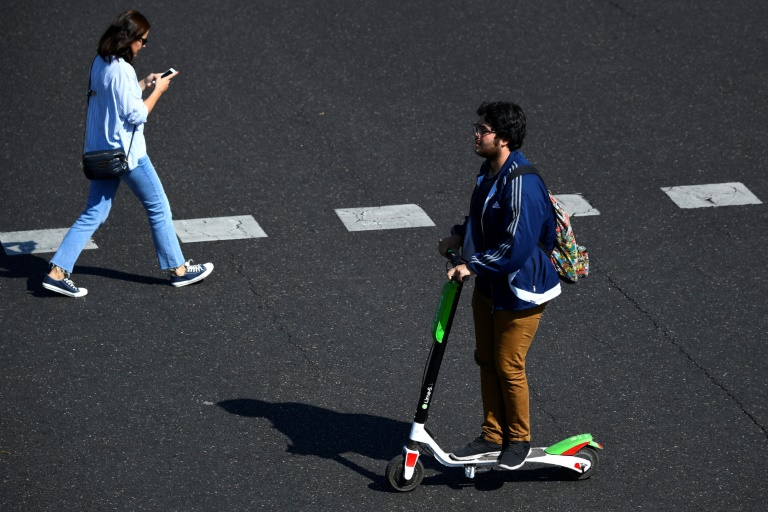 Electric scooter sharing schemes have popped up in city streets across Spain and elsewhere in Europe.(Photo: AFP)

Cities across Spain are grappling with electric scooters that have popped up on sidewalks across the country, helping riders zip around but exasperating drivers and pedestrians.

In Madrid public opinion is divided over the hundreds of electric scooters which California-based start-up Lime -- partly owned by ride-hailing Uber and Google parent company Alphabet -- has made available since mid-August.

Unlike schemes involving shared bicycles that typically must be left in docking stations, the scooters are dockless, leaving riders responsible for parking them out of the way. The next rider can find the nearest scooter with a smartphone app, unlock it and use it for a fee.

Similar electric scooter sharing programmes have been introduced in other European cities including Paris, Vienna and Zurich.

In Madrid, Lime's scooters -- which have already been used over 100,000 times -- are tolerated by the left-wing city hall, intent on reducing pollution.

But the scooters are often left in places where they obstruct sidewalks -- and their users often speed by pedestrians or hog roads.

Last month a video of two people, including a child, wearing masks while they raced along a highway near the Mediterranean port of Valencia on an electric scooter went viral.

"They don't respect anything at all. We need rules. It's crazy. They ride on lanes reserved for buses and taxis. They cross in front of cars," Fernando Sobrino, a 59-year-old taxi driver, told AFP as he waited for passengers in the centre of Madrid.

Jose Manuel, a 55-year-old salesman, complained the scooters "ride on sidewalks without any control".

"There is a risk of getting rear-ended by one as happened to me the other day," he said as he made his way along the Gran Via, a busy shopping street in central Madrid.

The arrival of the scooters in Madrid follows the introduction of a public electric bike share system in June 2014.

Users of the scooters are delighted.

"You move around faster, you can visit more areas, it's relaxing and easy to use," said Monica Rodriguez, 58, at Madrid's bustling Retiro park.

She admitted, though, that the scooters can be "dangerous and annoying for people who are walking".

The introduction of this new form of transport caught big Spanish cities off guard.

In Madrid, which is home to around 3.2 million people, the city hall only adopted measures on Friday.

The scooters are banned on pavements and pedestrian streets, but they are authorised on all roads where the speed limit is 30 kilometres (19 miles) an hour -- a limit set to be implemented soon on 80 percent of the city's streets.

Barcelona, Spain's second-largest city which is overwhelmed by mass tourism, already bans the use of privately owned scooters from sidewalks.

"Self service" scooter rentals like those offered by Lime are banned.

When German firm Wind launched an electric scooter sharing programme in Barcelona in August, within hours police removed the vehicles from the streets.

The municipality of Llobregat near Barcelona stopped Lime from setting up shop.

The scenario was repeated in Valencia, which has an extensive network of bike lanes.

Lime deployed a fleet of scooters in the city in August without authorisation from city hall, which demands a licence for anyone who carries out a commercial activity on public roads.

Lime's scooters were removed and the firm was slapped with a fine. It is now trying to convince Valencia city hall to allow it to pay a fee in exchange for an operating licence.

Lime's representative in Spain, Alvaro Salvat, said he regrets the lack of specific laws for electric scooters in Madrid and most Spanish cities.

"We are the first to ask for them for our users, for residents, so we know where to go and where not to go," he told AFP.