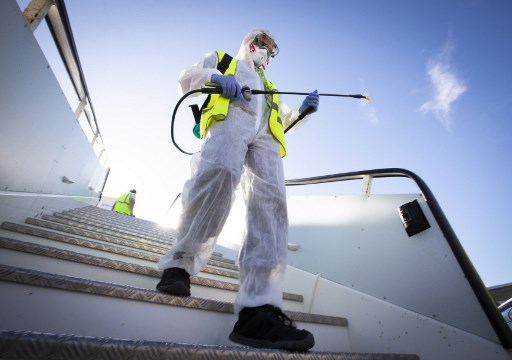 An employee wearing protective gear leaves after conducting a disinfection of an Air Europa's aircraft at Son Sant Joan's Airport in Palma de Mallorca on April 30, 2020, as the country prepares to ease its tough lockdown measure. (Photo: AFP)

MADRID, May 6 (Xinhua) -- The Spanish Congress (lower chamber) on Wednesday voted to approve Prime Minister Pedro Sanchez's request to extend the State of Alarm he imposed on the country on March 15 to curb the spread of the coronavirus for a further two weeks after it was due to expire on May 9.

The extension was approved with 178 votes in favor, 75 votes against and 97 abstentions.

It had the support of Sanchez's ruling Socialist (PSOE) party and coalition government partners Unidas Podemos, as well as the votes of the center-right formation, Ciudadanos, the Basque Nationalist Party (PNV) and the votes of some small regional parties.

It was opposed by the Vox, as well as the Catalan parties, Junts Per Catalunya, Esquerra Republicana and CUP, while the largest opposition party, the People's Party (PP) abstained after having supported Sanchez in his three previous requests to extend the State of Alarm.

In his speech to the Congress, Sanchez insisted it was vital to maintain the measure as Spain begins its four-stage plan to relax confinement measures and slowly open up commerce. He insisted the State of Alarm is an important constitutional tool to maintain control over the movement of people within Spain and to try and stop the coronavirus spreading again.

Sanchez said it was not just a political and medical necessity to approve his request, but also a "moral" one, but with PP leader Pablo Casado saying that his party would oppose any further extensions beyond May 23, he will need to maintain the support of the PNV and Ciudadanos (both of whom asked Sanchez for a 'plan B') over the coming weeks.

A State of Alarm is the first of three emergency levels a Spanish government can apply under exceptional circumstances, with the others being a 'A State of Exception' and 'Martial Law'. A State of Alarm grants the government special powers to limit the movement of citizens, to control the means of production and use private assets if needed and also to use the military to carry out essential logistical and supply jobs.