Scorching heat has caused power prices to soar in Spain, leading to renewed tensions in the country's leftist coalition government over how to lower ballooning electricity bills. 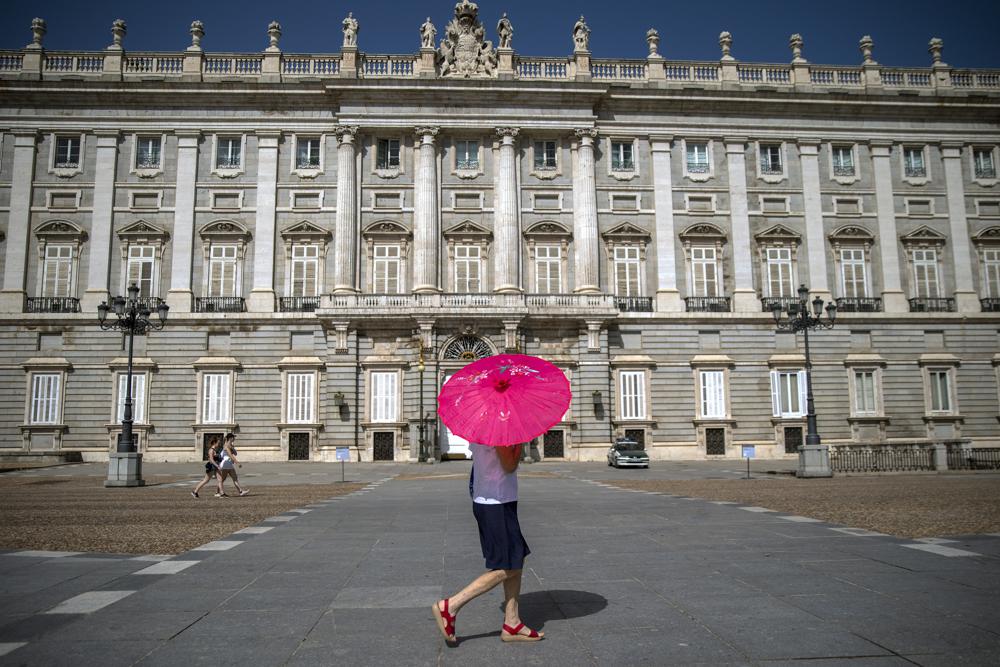 A woman with an umbrella walks past the Royal Palace during a heatwave in Madrid, Spain, Friday, Aug. 13, 2021. (Photo: AP)

A recent heatwave which sent temperatures soaring as high as 47 degrees Celsius (117F) in the southern region of Andalusia caused demand for electricity to jump as people turned on their air conditioners, putting further pressure on power prices which were already high due to a global natural gas supply crunch.

"Everything indicates the month of August will end with the highest electricity bill in history," consumer rights group Facua said Tuesday.

It predicts the average monthly household electricity bill this month will hit 92 euros ($107), a 44 percent increase over August 2020.

The jump in prices has largely offset the temporary reduction in the value-added tax (VAT) on electricity bills -- to 10 percent from 21 percent -- which Socialist Prime Minister Pedro Sanchez's government introduced in July to provide relief to consumers.

Far-left party Podemos, the junior partner in Sanchez's coalition government, has accused the administration of not doing enough to cut power bills.

The government "must intervene in the power market and move towards a system of regulated prices," Labour Minister Yolanda Diaz, one of the co-leaders of the party and also the third highest-ranking member of the government, told the Ctxt magazine.

"All of this is due to a process of privatisations in the electricity sector... which has resulted in an oligopoly that has led to repeated price increases every year," she added.

Spain at the end of 2020 had the fifth-highest household electricity prices in the European Union after Germany, Denmark, Belgium and Ireland, according to Eurostat, the bloc's statistics office.

The country relies more heavily on natural gas to produce electricity than other European nations such as neighbouring France, which has a significant nuclear power sector, said Jordi Castilla, the spokesman for consumer group Facua.

Podemos has called for the government to issue a decree that imposes an "immediate" ceiling on power prices and has threatened to stage street protests over the issue, in a country where this question of energy poverty gets regular media attention.

The proposal has been rejected by the Socialist party, which argues Spain must respect European market rules for electricity.

"To say that we can solve this with a decree generates false hopes," Minister for the Ecological Transition Teresa Ribera, a socialist, said last week in a TV interview.

"Look what is happening in the rest of Europe, it is not a problem that is specific to Spain."

Ribera has instead called on Brussels to change the rules that set power prices in the European Union, which are, according to her, dictated by the price of fossil-fuels, a system which hurts gas-dependent Spain.

The minister wrote to the European Commission a few weeks ago to request alterations to the system, but Brussels "answered that it had no intention of introducing changes", she told news radio Cadena Ser earlier this week, adding that such a position was "not reasonable".

Ribera, however, has raised the idea of creating a public firm to manage the country's hydroelectric plants, a measure long demanded by Podemos to replace major power firms which it accuses of making huge profits on the backs of consumers.

But this will ony be possible when existing electrical power concessions expire, which will only happen in a few years.

Podemos and consumer groups are asking for the government to make the drop in the VAT tax on household electricity bills permanent.

Taxes account for over 45 percent of the electricity bill in Spain, compared to an average of around 40 percent in the European Union.

Sanchez's government earlier this month extended until October a ban on cutting off electricity and other utilities over unpaid bills as part of measures aimed at helping vulnerable people hit by the economic fallout of the pandemic.