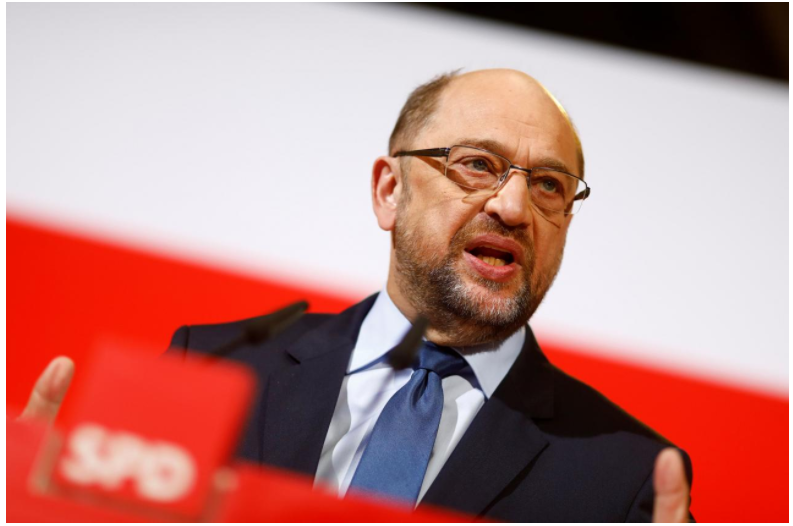 SPD leaders agreed on Friday to open exploratory talks on forming a government with Merkel’s center-right bloc, providing a chance to end a rare period of political deadlock in Europe’s economic powerhouse after an inconclusive federal election.

Merkel, who lost many supporters to the far-right in the Sept. 24 election, is banking on the SPD to extend her 12-year tenure after attempts to cobble together an awkward three-way alliance with two smaller parties failed in November.

SPD members fear the party risks losing its identity and sustaining further electoral defeats if it signs up for another “grand coalition” with the conservatives. The SPD was Merkel’s junior coalition partner from 2005-2009 and from 2013-2017.

Handelsblatt said in a report to be published on Monday that Schulz had told a group of SPD lawmakers that his party should take control of the finance ministry which was led by veteran conservative Wolfgang Schaeuble for the past eight years.

“The goal is (to get) the Federal Finance Ministry,” Schulz was quoted as saying, adding that the past years had shown how important the finance department had become.

The SPD was not immediately available to comment on the report.

Merkel’s conservatives and the SPD are expected to meet next Wednesday to discuss the timetable and agenda of exploratory talks which will not start in serious before early January.

Then another SPD party convention will have to give green light to kick off official coalition negotiations, scheduled for mid-January. Any agreement would finally be subject for approval by SPD members afterwards. That could mean that Germany most probably will not have a new government in place before March.

If the SPD were to agree to another “grand coalition” - an option that the SPD says is by no means a foregone conclusion - and demand the finance ministry, it would likely result in changes to Germany’s European policy such as more focus on spending and investment rather than austerity.

Schaeuble, who has taken on the role of president in the Bundestag lower house of parliament, became unpopular among struggling euro zone states during his eight years in office due to his focus on fiscal restraint and structural reforms.

Merkel ally Peter Altmaier has taken over the role as finance minister in the current caretaker government.

Schulz has repeatedly said Europe could not afford to undergo another four years of the kind of European policy that Schaeuble had practiced.