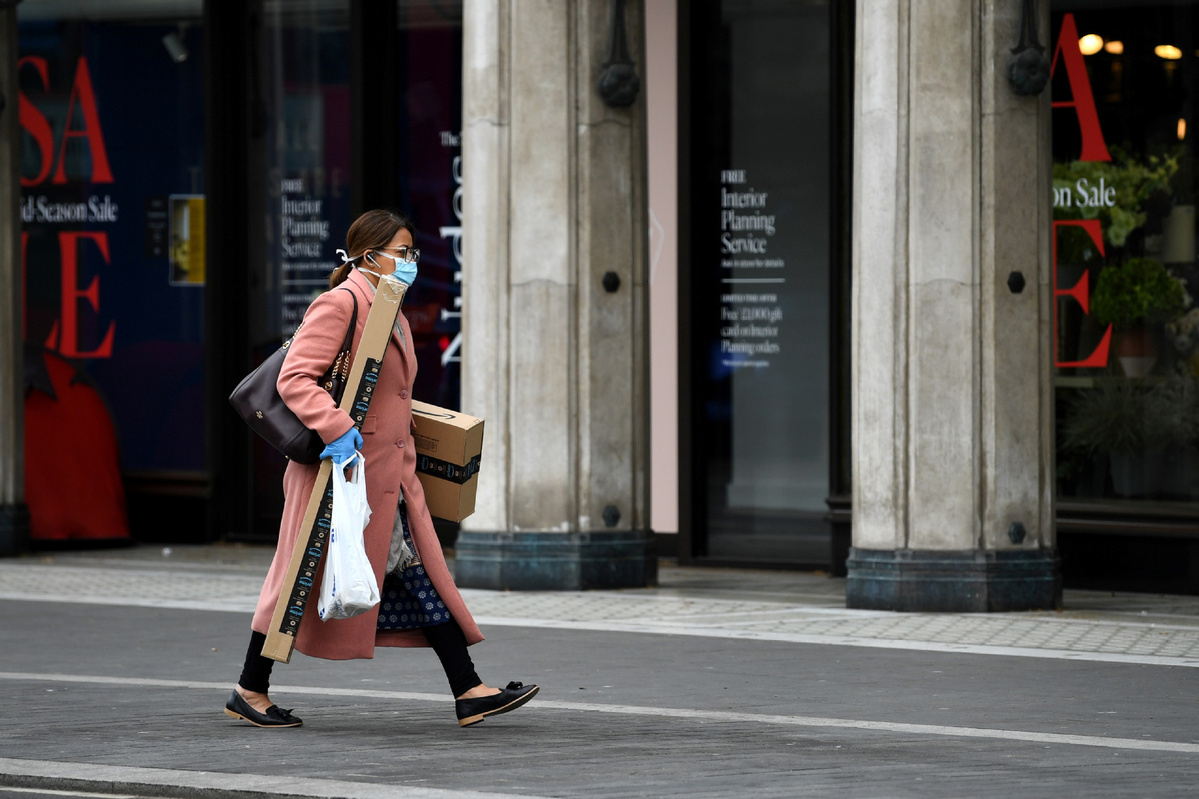 A woman is seen wearing a protective face mask in Tottenham Court Road, as the spread of the coronavirus disease (COVID-19) continues, London, April 1, 2020. [Photo/Agencies]

Rising deaths coincide with medics' calls for gear, but Italy trend down

Britons have been jolted by the biggest rise in deaths in a single day due to the novel coronavirus, as doctors cried out for more protective gear on Tuesday and Prime Minister Boris Johnson spent another night in intensive care for persistent COVID-19 symptoms.

Deaths in the country reached 6,159 on Tuesday, with 786 fatalities added from the previous day－the largest such rise in a day. The virus has infected more than 55,000, health authorities said.

Johnson on Tuesday spent a second night in intensive care and was in a stable condition after receiving oxygen support for COVID-19 complications while his foreign minister directs the country's battle against the outbreak.

Johnson, 55, who tested positive for the coronavirus nearly two weeks ago, was admitted to hospital on Sunday evening as he had a persistent high temperature and cough but his condition deteriorated on Monday and he was rushed into an intensive care unit.

His designated deputy, Foreign Secretary Dominic Raab, said Johnson would soon be back at the helm as the world faces one of the gravest public health crises in a century.

"The prime minister is in a stable condition, he's comfortable and in good spirits," Edward Argar, a junior health minister, said on Wednesday. "He has in the past had some oxygen but he's not on ventilation."

London Mayor Sadiq Khan said on Wednesday that the United Kingdom is nowhere near lifting its lockdown measures as the peak is still more than a week away.

UK doctors continue to voice serious concerns about a lack of personal protective equipment, with some calling the current provision "useless", the British Medical Association has warned.

In a BMA survey of almost 2,000 health workers, more than two-thirds of doctors－69 percent－said they did not feel protected.

The virus is raging across Europe, which has reported 634,735 infections and 55,826 deaths as of Wednesday, according to the European Centre for Disease Prevention and Control.

Italy, the most affected country in Europe, registered 135,586 confirmed cases as of Tuesday, including 17,127 deaths. Civil Protection Department Chief Angelo Borrelli stressed on Tuesday that "the decrease in the trend of new infections is being confirmed".

He also confirmed that the pressure on Italian hospitals was lessening, and especially "for intensive care units, where we have now 106 fewer patients (compared to the previous day)".

Borrelli also praised the nation's health workers for their non-stop contributions. "My thoughts are with medical professionals ... who are doing their best to protect all of us," he said.

A team of doctors and nurses from Romania and Norway is being dispatched to Milan and Bergamo, the European Union said on Tuesday in a statement. Austria has offered over 3,000 liters of disinfectant to Italy.

"These nurses and doctors, who left their homes to help their colleagues in other member states are the true faces of European solidarity," European Commission President Ursula von der Leyen said.

On Monday, Italy received a delivery of personal protective equipment from China. The commission said a Chinese plane delivered 2 million surgical masks, 200,000 N95 masks and 50,000 testing kits to the country.

Too early to lift lockdown

Of these, 7,091 had perished in hospitals, including 597 new deaths, and 3,237 in aged-care homes, he said, warning "the epidemic is continuing its progression".

Senior government officials warned it was too early to think of lifting the nationwide lockdown－which came into force on March 17 and is set to run until April 15.

Interior Minister Christophe Castaner urged municipal officials to toughen restrictions on movement if necessary, and Paris announced a ban on outdoor sports by individuals between 10 am and 7 pm, from Wednesday.

Jonathan Powell andEarle Gale in London, Xinhua and agencies contributed to this story.