Spirit of Ping-Pong Diplomacy lives on 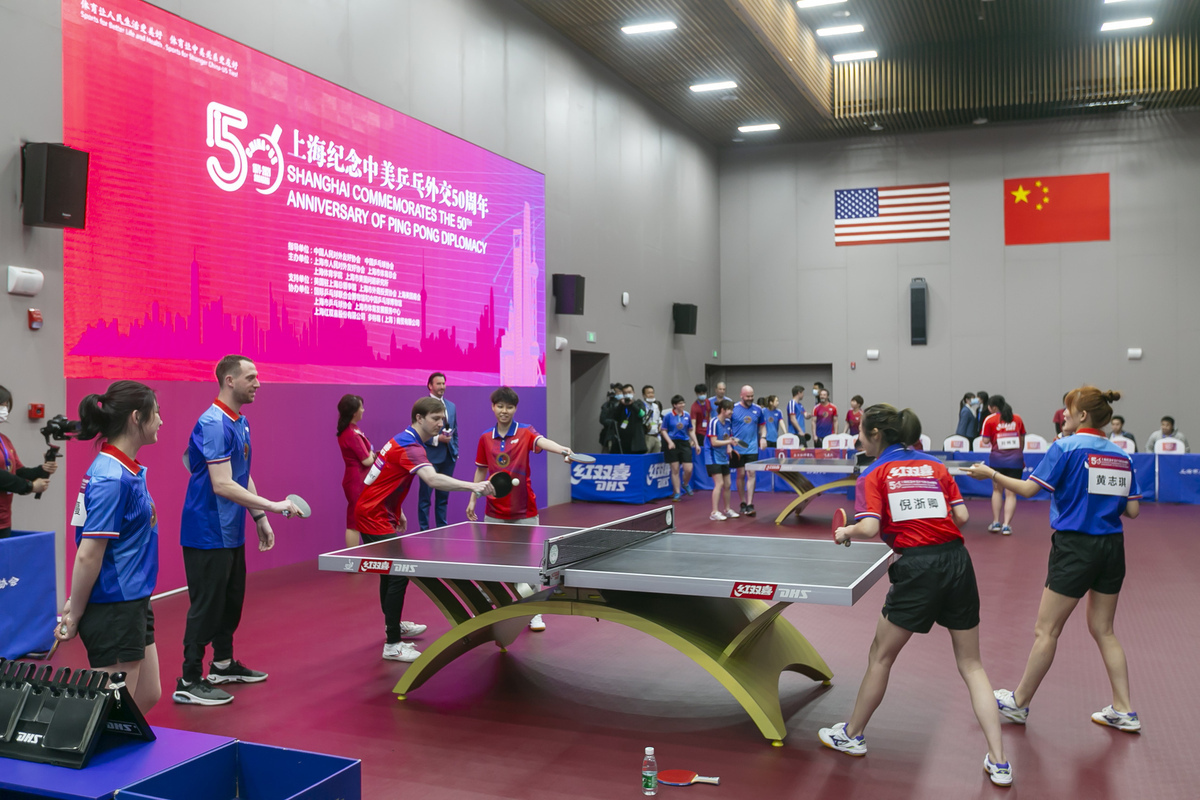 Players from both sides participate in a China-US Ping-Pong friendly match during a special event in Shanghai, April 10, 2021. [Photo/Xinhua]

Three US citizens involved in Ping-Pong Diplomacy 50 years ago discussed the significance of the matches then and now while expressing optimism for Sino-US relations.

Judy Hoarfrost was 15 years old and had to ask her parents' permission to travel to China when her US table tennis team was invited to visit in April 1971.

The Chinese players "were vastly superior to me", she said. "They called the matches' friendship first, competition second', and that's what we experienced over and over again while we were in China. It was warm hospitality and an amazing experience," she said at a webinar hosted by the National Committee on US-China Relations (NCUSCR) on Wednesday.

Hoarfrost's memorable moments included visits to the Great Wall, the Forbidden City and other significant cultural and historical sites; watching the ballet The Red Detachment of Women; and playing matches in Beijing, Shanghai and Guangzhou, winning three out of four matches.

But she said her most memorable occasion was meeting with then-premier Zhou Enlai at the Great Hall of the People.

"Just the experience of looking at Zhou face-to-face. He looked straight at my eyes and shook hands. That photo was sent out by The Associated Press around the world, which I didn't know until we left China eight days later," Hoarfrost said.

She recalled that Zhou said the US team had opened a new page in the relations between the two peoples.

"He said it right there, the significance of our trip to China," she said.

Hoarfrost said the first Chinese song she heard when crossing the border bridge was The East Is Red.

"I ended up learning the lyrics of that song, and 25 years later I sang it at our 25th anniversary trip to China when we did karaoke, which surprised all the Chinese," she said.

Doug Spelman, a retired foreign service officer and academic who served as an interpreter for the Chinese team, said he was struck by two aspects of the Chinese table tennis players' visit to the US.

"The meeting with (then US president Richard) Nixon in the Rose Garden was significant. It was made clear that the Ping-Pong players were heavy political messages," Spelman said.

The other thing was the way the Chinese table tennis players were welcomed in the United States.

"It occurred after many years of acrimony and confrontation between the two countries. I was struck by the big crowds at the exhibition matches that turned out, and how a few people in the streets were quoted by the newspapers about how glad they were that the Chinese were here and hopefully this will bring peace between our two people. I think those two sides captured the meaning and significance of the trip," Spelman said.

Jan Berris, vice-president of the NCUSCR who accompanied the Chinese table tennis delegation on its travels in the US, said the hosting organization purposely set the ticket price for matches at a few dollars to allow Americans from all walks of life to participate.

Berris said that "friendship first, competition second" became the watchwords of the Chinese team during its trip to the US. The US table tennis players as well as many in the media learned that phrase in Chinese. To embody that spirit, the more superior Chinese players allowed the US players to win some matches in turn.

On the US side, there was much warmth, Berris said.

"I was surprised by how invariably the question all the players were asked was, 'What has surprised you most about being in the United States?' Invariably the answer was the hospitality and the warmth of the friendship of the US people."

At first, Berris thought it was a political and diplomatic answer.

"But as the trip went on, not only in big cities like Detroit but also in rural areas, I myself would give the same answer. What surprised me most was how warm, hospitable and how curious the Americans were about the team and about China, and it was very heartwarming to see that."

Despite the current chill in the Sino-US relationship, both Berris and Hoarfrost said that sports exchanges are continuing between the two countries, with Americans running sports camps in China, and Chinese coming to the US to get trained at various camps.

"When you look at relations on the Beijing-to-Washington level, they are pretty awful. But when you get down to the subnational level, we still see, despite the problems at the top－and granted, it's not at all rosy－but there is an interest in continuing to have engagement, especially among people of the same profession whether it's sports, agriculture or whatever. There is a desire to share and to learn," Berris said.