CANBERRA, Nov. 19 (Xinhua) -- A report has found evidence that Australian soldiers unlawfully killed 39 people during the war in Afghanistan. 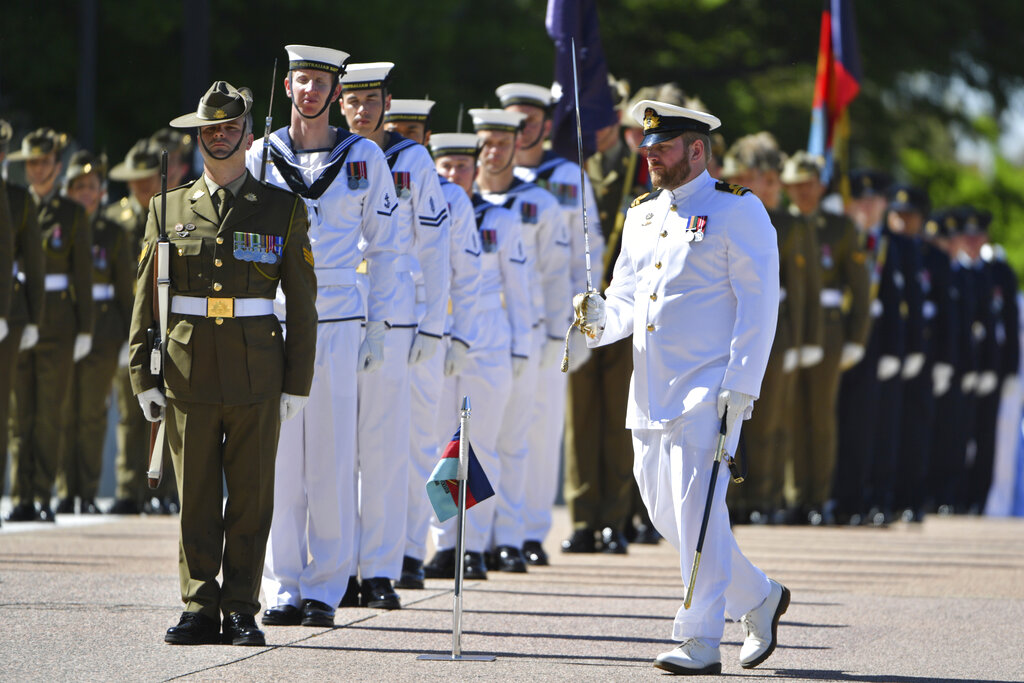 An honor guard is formed at Defence Headquarters in Canberra, Australia, Thursday, Nov. 19, 2020, before findings from the Inspector-General of the Australian Defence Force Afghanistan Inquiry are released. (Photo: AP)

The government on Thursday released the findings of the Inspector General of the Australian Defence Force (ADF)'s four-year inquiry into rumors of possible breaches of the laws of armed conflict in Afghanistan between 2005 and 2016.

It recommended that the Australian Federal Police (AFP) launch criminal investigations into 19 serving and former members of the special forces over their roles of 39 alleged murders of prisoners, farmers and civilians in 23 separate incidents.

Angus Campbell, the chief of the Defence Force, said the report found that "none of the alleged unlawful killings were described as being in the heat of battle" and apologized to the Afghan people.

"It is alleged that some patrols took the law into their own hands, rules were broken, stories concocted, lies told and prisoners killed," he told reporters in Canberra.

The inquiry conducted by New South Wales Supreme Court Justice Paul Brereton alleged that junior soldiers in the special forces were instructed to execute prisoners by their superiors in a practice known as "blooding."

Brereton described the actions of the special forces as "disgraceful and a profound betrayal" of the ADF.

One of the incidents detailed in the report alleged that Special Air Service (SAS) Regiment soldiers slit the throats of two 14-year-old boys who they suspected were Taliban sympathizers and threw their bodies into a nearby river.

In every case, the report said it "was or should have been plain that the person killed was a non-combatant."

The inquiry also uncovered evidence that special forces regiments allegedly gloated about their actions, kept kill counts and planted phones and weapons on corpses to justify their actions.

"This practice probably originated for the less egregious though still dishonest purpose of avoiding scrutiny where a person who was legitimately engaged turned out not to be armed," the report said.

"But it evolved to be used for the purpose of concealing deliberate unlawful killings."

Campbell said commanders of the units implicated by the report would be dealt with on a "case-by-case" basis.

The report recommends that compensation be paid to the families of the Afghan victims before any criminal prosecutions and that the honors awarded to those implicated in the report be revoked.

More than 400 witnesses ranging from soldiers to Afghans were interviewed for the inquiry.

Brereton identified a "warrior culture" within the Australian SAS Regiment and found that the ADF as a whole had been undermined by the actions of the alleged perpetrators.

"A substantial indirect responsibility falls upon those in the Special Air Service Regiment who embraced or fostered the 'warrior culture' and the clique of non-commissioned officers who propagated it."

He said special forces operators should pride themselves on being model professional soldiers.

Ahead of the release of the report Campbell, Prime Minister Scott Morrison and Defence Minister Linda Reynolds called their Afghan counterparts to express their "deepest sorrow over the misconduct by some Australian troops."

Army Chief Rick Burr on Wednesday wrote to all ADF, describing the allegations contained in the report as "extremely troubling" and calling on them to "never let it happen again."

"This will be an opportunity for our people to ask questions about the inquiry report, understand it, learn from it, and emerge stronger together in order to never let it happen again," he wrote.