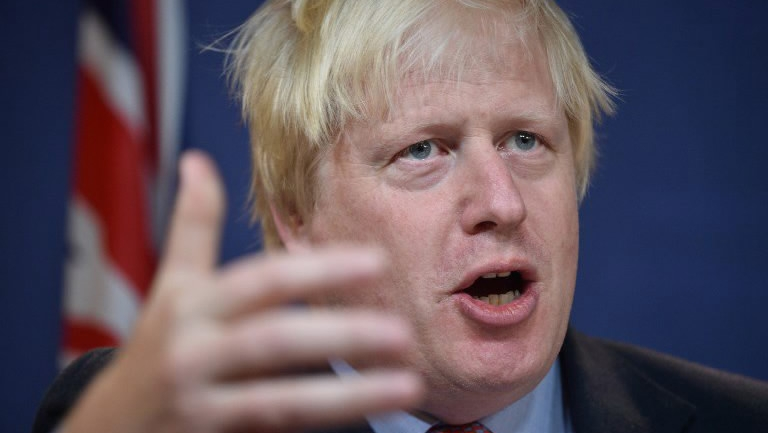 In the final debate before the House of Commons went into a Johnson-driven suspension, the prime minister told MPs that he will not ask the European Union (EU) next month for another delay to Britain's departure from the bloc.

Johnson told a crowded chamber during angry exchanges: "The people of this country have had enough."

Johnson's second bid to trigger a snap election in mid-October again failed on Tuesday in the House of Commons.

A total of 293 of the 650 House of Commons members backed the proposal, short of the two-thirds majority needed which would have required the government winning more than 400 votes.

Urging politicians to back his call, Johnson said a general election was the only way to break the Brexit deadlock.

Johnson said he would go to the European Council meeting on Oct. 17 to get a Brexit deal.

"I will go to Brussels and negotiate our departure, hopefully with a deal, but without one if necessary. I will not ask for another delay," he said.

After the result was announced, Johnson said the government will press on and negotiate a deal, while being prepared to leave the EU without one.

Jeremy Corbyn, leader of the main opposition Labour Party, told MPs that the prime minister did not intend to follow a law just passed by the parliament, instructing him to ask Brussels for a deal if no deal has been reached.

Corbyn said he backed an election and wanted to "turf out this reckless government."

"We are not walking into a trap laid by the prime minister," he told lawmakers.

After the vote, politicians went through a formal process of proroguing, or suspending parliament for five weeks, the longest ever suspension of the House of Commons.

MPs will not reassemble again at Westminster until Oct. 14 when Queen Elizabeth II re-opens a new session of the parliament.

Johnson's government has said negotiations will continue with Brussels during shutdown in the hope that a Brexit deal can be brokered ahead of Britain's planned departure from the EU.

Politicians and political commentators are now left to ponder how the Brexit impasse will be resolved.

In a day of busy political activity ahead of the shutdown, Johnson flew to Dublin for discussions with Irish Prime Minister Leo Varadkar.

Later it was announced that Queen Elizabeth II had given Royal Consent to a bill put forward by a coalition of opposition MPs that prevents Johnson from taking Britain out of the EU unless a deal with Brussels is in place.

Under the new law, Johnson is required to go to the European Council meeting in October to seek to delay Brexit if there is no deal.

The law flies in the face of Johnson's "do-or-die" determination to leave the EU at the end of October, with or without a deal. It also came just days after Johnson said he'd sooner "be dead in a ditch than ask the European Union for an extension."

Johnson is scheduled to head to Brussels on Oct. 17 for a crucial meeting of the European Council, which is made up of leaders of the 28 EU member states.

The action shifted to the chamber of the Commons for a series of emergency debates, linked to Brexit.

Speaker John Bercow generated breaking news on television channels when he announced Monday that he would be standing down as Speaker and as an MP on Oct. 31 at the latest.

Although Bercow was praised by politicians, including ministers, he has been blamed for making life difficult for both Theresa May's and Johnson's governments by allowing backbench MPs to seize control of the parliamentary order paper.

The first vote of the night, generated by former Conservative Attorney General Dominic Grieve, demanded Johnson's government hand over documents and details of communications relating to Johnson's decision to prorogue parliament, and documents compiled for what was called Operation Yellowhammer which spelled out the possible impact of a no-deal Brexit.

Documents about Operation Yellowhammer were leaked to a national newspaper.

Grieve's call for the release of the documents won by 311 votes against 302, which called on the British monarch to direct government ministers to hand the documents no later than Sept. 11.

In the second emergency debate Corbyn called on the House of Commons to require the government to abide by the law given Royal Assent on Monday requiring Johnson to ask the EU to extend Britain's membership of the EU if there is no deal.