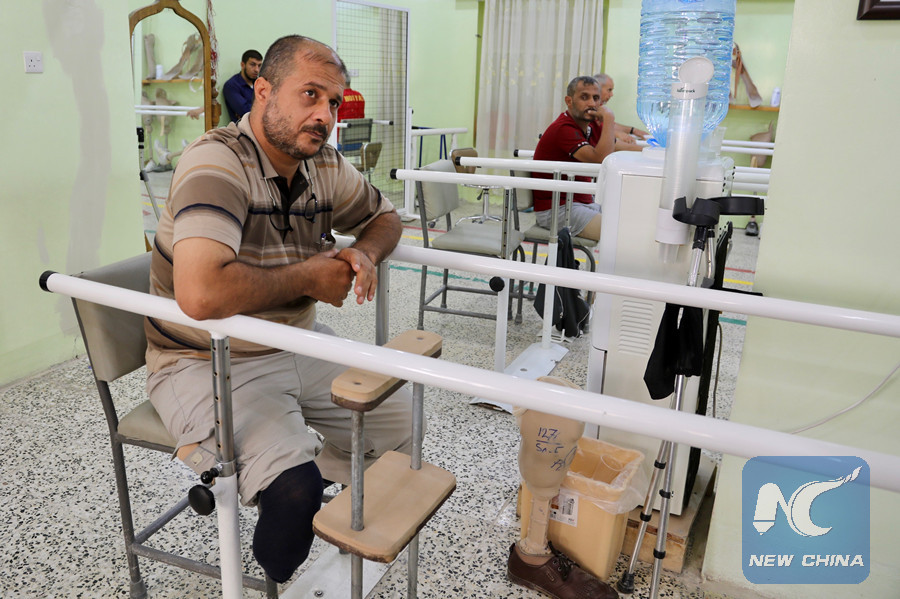 From lack of hospital beds and emergency rooms, to shortage of maternal, pediatric and post-traumatic care, thousands of Mosul inhabitants have returned to their war-torn homeland. (Photo: Xinhua )

From lack of hospital beds and emergency rooms, to shortage of maternal, pediatric and post-traumatic care, thousands of Mosul inhabitants have returned to their war-torn homeland.

Since Iraqi forces liberated the second largest city in Iraq one year ago, Iraqi authorities have yet to rebuild most of the devastated parts of the city, not to mention the badly deteriorated health institutions amid wrecked infrastructure.

In a post-operative facility run by Médecins Sans Frontières (MSF) in east Mosul, Saqar Badir was lying on bed, waiting for a decisive operation to fix his right heavily-deformed leg as he has suffered from two failed operations in private clinics.

Saqar, a 26-year-old auto mechanic, was shot by the Islamic State (IS) sniper during fleeing his home at an IS-controlled neighborhood in Mosul last June, and rescued by other family members.

Saqar wishes that he could resume work to support his family which suffers abject poverty like most of the city residents.

"Now I only live with the help of people. I came here to do the operation because I don't have money," Saqar said. However, if the external fixation failed again, he could encounter high risks of amputation.

"At the moment Mosul has 1.8 million population, 9 of 13 hospitals were destroyed. There used to have a capacity of 3,500 beds while now only less than 1,000 left," Heman Nagarathnam, MSF's Head of Mission in Iraq told Xinhua.

"Basic health care is not there, but with huge health need. A total of 70 percent of actual capacity in terms of health is no longer existing," he said.

Catastrophic destruction was widespread in the old city of Mosul, where daily temperature in summer can reach up to 50 degree Celsius.

"We have a hospital in the western part of Mosul, approximately 95 percent of emergency cases are due to mine, booby-trap in the house and immediate injuries," Nagarathnam said.

Talking about the far-reaching health impact, Nagarathnam indicated "a disastrous situation" could occur given by the fact that both primary and secondary care are absent in Mosul.

Accessing health care services is a daily challenge for thousands of children and adults in Mosul, as the city's population is increasing by the day as more displaced people are returning home.

In May alone, more than 45,000 returned to their homes in Mosul, while the health system is not recovering and there is a huge gap between the available services and the needs of the growing population.

"We need to rebuild the health facilities here and also make sure they are available and affordable," said Nagarathnam, who called for national and international efforts to rebuild health infrastructure in the city.

Countless children, who were deprived of three-year-education in Mosul under IS control, urgently require mental health care besides to cure their wounds.

The 12-year-old Anas would never play soccer again after a mortar shell made him paralyzed. His mother also have severe psychological problem.

Gao Zhichang, a Hongkong surgeon, was helping an Iraqi boy stretching his burned hands and assured him both hands would function well after surgery.

"Iraq is a war-torn country, there is a big health demand for the community here. That's why I am here," said Gao, who is on 11th field mission with MSF.

"Serving for humanity is my teenage dream. Since I am in high school, I really wanted to do something for those people in need," the 61-year-old surgeon said.

"Earning money is not the only goal in life. Sometimes happiness can come along in many ways," Gao said.

Moreover, the wounded have massive demand for prosthesis device, rehabilitation care and training.

In a physical rehabilitation center established by the International Committee of the Red Cross (ICRC) in Erbil, around 100 km east of Mosul, Mohammad Abullah was struggling to walk again with artificial limb.

"I had quarrels with IS members because of smoking, then they started to beat me to bleeding," Abdullah was forced to amputate his leg without appropriate treatment.

"The number of amputees has increased during fight against IS," Srood Suad Nafie, manager of the ICRC physical rehabilitation center said. "A lot of patients with disabilities try to reach our center in order to receive services after the liberation of Mosul and even before that."