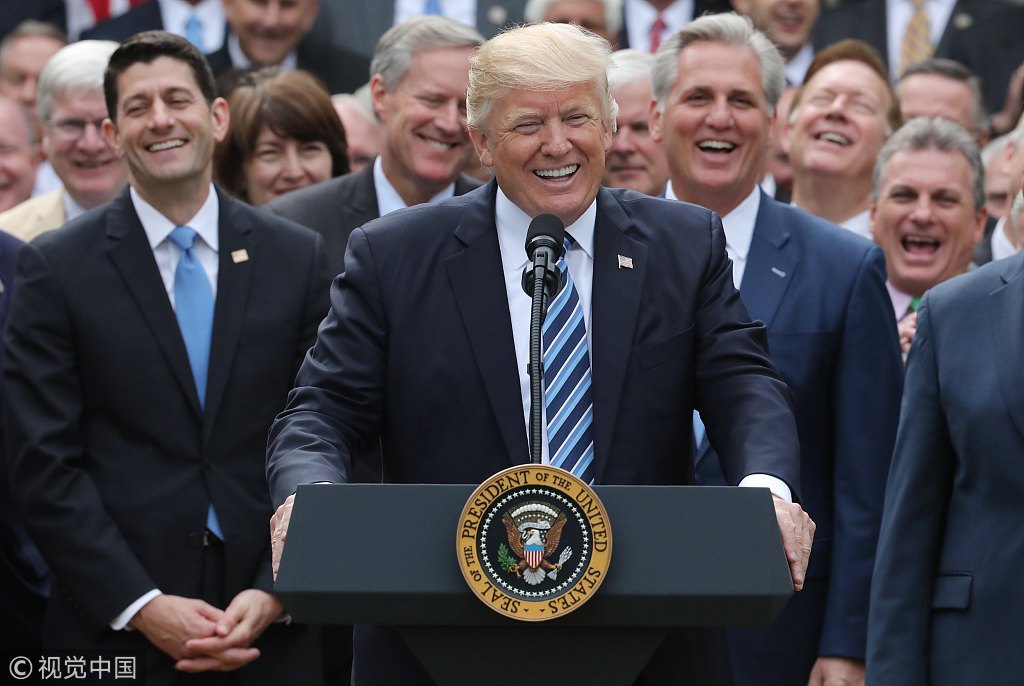 Endorsed by the "America First" strategy, the US foreign policy of the Donald Trump administration has stirred up controversy and unrest around the world.

As tension lingers on the Korean Peninsula as well as the Middle East, the doctrines the Trump administration will follow regarding international affairs in his remaining years in office will be vital to global stability and development.

There were mounting reports in the past months that the Trump administration was weighing attacks to rid Pyongyang of its nuclear program.

A limited and preemptive "bloody nose" strike was reportedly discussed seriously by the US military, though many have warned of the risk of igniting an all-out war.

US policymakers must face the facts, said Michael Fuchs, an expert on US foreign policy.

"There are no acceptable US military options involving a first strike, given the inevitable retaliation and mass casualties that would follow," Fuchs, senior fellow at Center for American Progress, a Washington-based think tank, wrote on magazine Foreign Affairs.

An all-out war on the Korean Peninsula would be catastrophic beyond any imagination.

Even if the Democratic People's Republic of Korea (DPRK) uses only its conventional munitions, casualties were estimated to range between 30,000 and 300,000 in the first days of fighting, according to a report compiled by US Congressional Research Service, gathering views of six experts on national security and Asian affairs.

In either scenario, we lose even if we "win" in a strictly military sense, said US lawmakers Ruben Gallego and Ted Lieu.

A "freeze for freeze" agreement, in which Pyongyang stops missile and nuclear tests and Washington stops military exercises with South Korea, could help get both sides to the negotiating table, according to Fuchs.

The six-party talks, which included the DPRK and the US, along with China, Japan, Russia, and South Korea, could be revived as a formal coordination mechanism to denuclearize the Korean Peninsula, Fuchs suggested.

"But the real work would have to be done bilaterally between Washington and Pyongyang," he added.

From the recognition of Jerusalem as the capital of Israel to the "ultimatum" which could spell an end to the landmark Iran nuclear deal, Trump's policies on the Middle East involved highly controversial decisions, adding turmoil to the region.

Palestinian President Mahmoud Abbas recently claimed that the United States has chosen to disqualify itself from playing a role in the peace process.

"They have proven their full bias in favor of Israel," said Abbas.

Meanwhile, a formidable group of regional powers, including Turkey, Iran and Jordan, have voiced their rejection of the US role in the Israeli-Palestinian talks, while the US is crafting its Middle East policy.

On the Iran nuclear deal, European countries complained that Trump has taken no positive action despite his efforts to solicit support from Europe.

Those who oppose the nuclear agreement should come up with a better solution and "we haven't seen it so far," said British Foreign Secretary Boris Johnson.

Prospects for peace and US national security interests in the Middle East have been dampened following Trump's decisions, commented US foreign policy experts Hady Amr and Arsalan Suleman.

"As the global fallout over Trump's unilateral decision continues to spread, it is increasingly obvious that the Trump administration failed to anticipate the full scope of negative global reaction and has been caught flat-footed in response," wrote Amr and Suleman in an article posted on the website of US think tank Brookings.

"America First," a strategy which Trump has been touting since his presidential campaign, is believed to be the motive for Trump's controversial actions.

US-Russia relations hardly advanced in 2017 due to the ongoing probe of Russian interference in the 2016 US presidential elections and other factors.

Looking ahead, experts see few signs of reconciliation between the two countries.

The disagreements are "intractable," said a report published in November, gathering views of scholars from the Washington-based think tank Center for Strategic and International Studies (CSIS) and the Russian International Affairs Council (RIAC).

In the latest US national security strategy report published in December, Russia was described as a "revisionist power" from which the United States faces growing threat.

"The Trump administration will be very focused on strengthening America's military might in Europe, expanding sanctions against Russia, also combating Russia influence in the Middle East," said Gardiner.

Experts said that Russia's involvement in Syria paid off in the Middle East, right at a time when the United States chose to change its strategy in the region.

The two world powers are "stretching and testing the limits of what is possible in the world," said the CSIS-RIAC report.