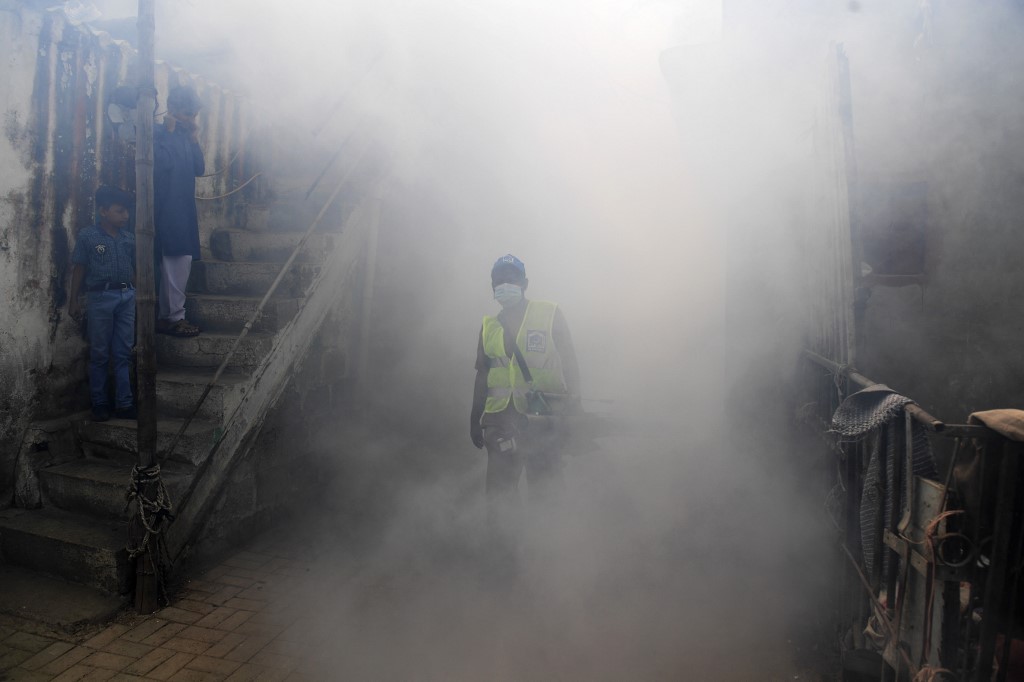 A worker sprays insecticide to kill dengue mosquitoes along a street in Karachi on September 9, 2022. (Photo: AFP)

ISLAMABAD, Sept. 29 (Xinhua) -- The number of dengue fever cases continues to rise in Pakistan amid an outbreak blamed largely on floods triggered by heavy monsoon rains in the South Asian country.

In the last 24 hours, another patient died in southern Sindh province while 387 new infections were reported, said the provincial health department on Wednesday night. The worst-hit area was Karachi, the provincial capital, which reported 253 new cases.

With the newly reported dengue cases, the September figure to date for the province has risen to 6,603, bringing the local total tally to 9,127 together with 35 deaths this year.

In the last 24 hours, 378 more people were diagnosed with the disease in the northwestern Khyber Pakhtunkhwa province, the provincial health department reported on Wednesday night. The number of active cases in the province currently stands at 1,651 and the total number of cases this year has reached 7,728.

The eastern Punjab province reported 326 new cases in the last 24 hours, the provincial health authorities said on Wednesday. Punjab's capital Lahore reported 163 new cases, followed by its Rawalpindi city with 88 cases. The total number of dengue cases in Punjab this year has now gone up to 5,737.

The national capital Islamabad reported 73 new dengue cases in the last 24 hours, the health authorities said on Wednesday night. The city's total tally has risen to 2,235 this year.

The Pakistani government has launched an anti-dengue campaign including raising public awareness in response to the alarmingly high number of cases in the country and has taken special measures at the dengue hotspots to curb the spread of the mosquito-borne disease.