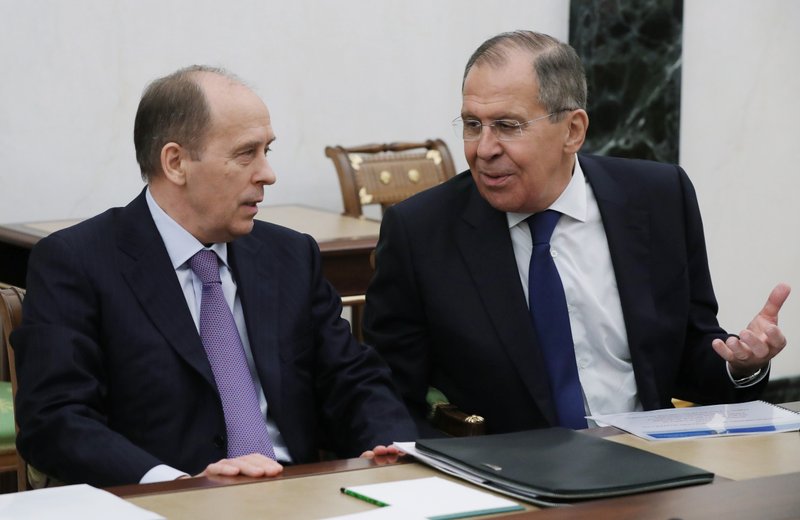 While Britain has accused the Russian state of ordering the poisoning of former spy Sergei Skripal, British Foreign Secretary Boris Johnson took it a step further Friday and said it’s “overwhelmingly likely” that Putin himself ordered the attack.

Putin’s spokesman denounced the claim as “shocking and inexcusable.”

Geopolitical tensions have been mounting since the poisoning of Skripal and his daughter Yulia in the English city of Salisbury on March 4, in what Western powers see as the latest sign of increasingly aggressive Russian interference in foreign countries. The tensions threaten to overshadow Putin’s expected re-election Sunday for another six-year presidential term.

Australia on Friday joined the condemnation of the nerve agent attack, as British Prime Minister Theresa May seeks a global coalition of countries to punish Moscow. The U.S., France and Germany have already lined up against Russia on this attack, and top EU diplomats may discuss next steps at a meeting Monday.

Russia ordered a halt to high-level meetings with the U.K. and prepared Friday to expel British diplomats in retaliation for similar British moves — but still hasn’t said who will be kicked out or when.

Britain is expelling 23 Russian diplomats and taking other steps against Russian interests as the two nations’ relations sink to a post-Cold War low.

Putin spokesman Dmitry Peskov was quoted by Russian news agencies as calling Johnson’s statement a “shocking and inexcusable breach of diplomatic propriety.” Peskov reiterated Russian denials of involvement in the attack that has left both Skripals in critical condition.

“We have never encountered this level of discussion on the global stage,” Peskov told reporters.

Lithuanian Foreign Minister Linas Linkevicius told The Associated Press that the Salisbury attack is a direct challenge to Europe that will likely be discussed at an EU ministers’ meeting Monday in Brussels. He said Russia’s recent provocations need a tough response, including action against Russian oligarchs with questionable ties who have used London as a safe haven.

The source of the nerve agent used — which Britain says is the Soviet-made Novichok — is unclear, as is the way it was administered.

Russia denies being the source of the poison, suggesting it could have been another country, and has demanded that Britain share samples collected by investigators.

The global chemical weapons watchdog says the class of nerve agents used in the Skripal attack has never been declared by any of its member states. The Organization for the Prohibition of Chemical Weapons also says it expects action soon in response to the British investigation.

Speaking to the AP, he called it unlikely that some of the nerve agent could have gone missing in the years after the 1991 collapse of the Soviet Union. He also cast doubt on the possibilities that the nerve agent was sent through the mail or was placed in luggage that Skripal’s daughter brought with her from Russia to Britain.

An 83-year-old Russian whistleblower who helped develop Novichok said in an interview published Friday that a few countries in the world have laboratories powerful enough to develop the nerve agent thanks to a formula he published in 2008.

Vil Mirzayanov, who now lives in New Jersey, is quoted in the Novaya Gazeta newspaper as saying that he revealed the existence of Novichok because he thought it was necessary to deprive Russia of its “deadly secret.”

The war of words between Moscow and London continued Friday, with Lavrov lashing back at British Defense Secretary Gavin Williamson for saying Russia “should go away and shut up.”

“Perhaps he lacks education,” Lavrov told a news conference after talks on Syria’s war with his Iranian and Turkish counterparts.

While many British politicians have backed the government in blaming Moscow for the nerve agent attack, the U.K.’s main opposition leader has cautioned against a rush to judgment. Labour Party leader Jeremy Corbyn said in the Guardian that it’s possible that “Russian mafia-like groups,” rather than the Russian state, were responsible.