COLOMBO, June 14 (Xinhua) -- Sri Lanka's Criminal Investigations Department on Monday arrested the captain of the burnt MV X-Press Pearl container ship which caught fire on the outskirts of the Colombo Port on May 20. 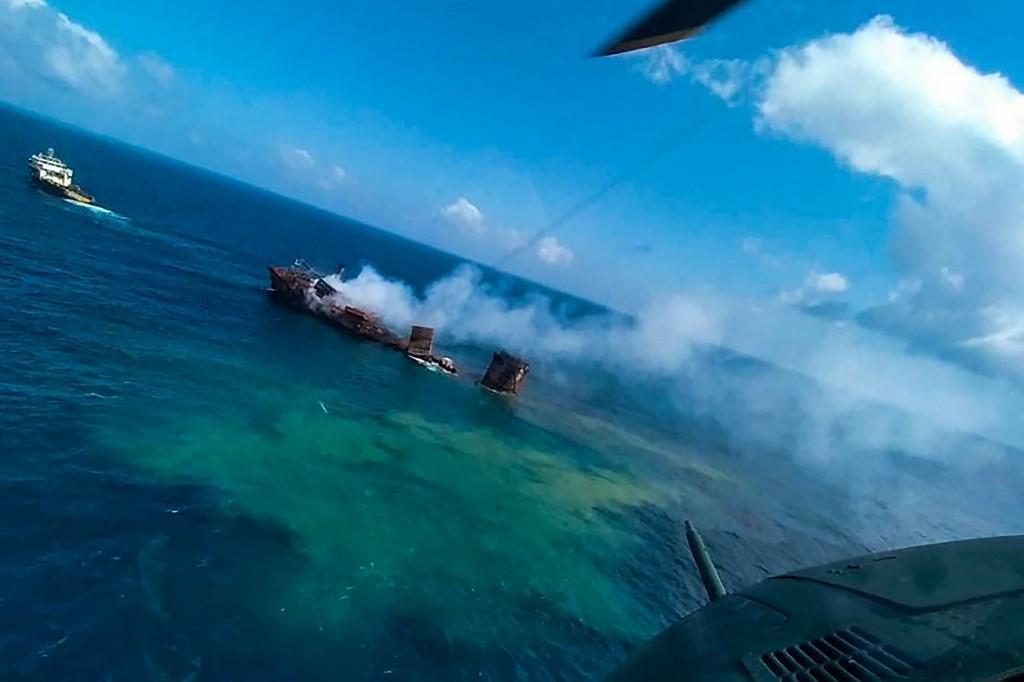 This handout photograph taken and released by Sri Lanka Air Force on June 2, 2021 shows smoke billowing from the fire stricken Singapore-registered container ship MV X-Press Pearl as it is towed away from the coast of Colombo. (File photo: AFP)

Police Spokesman DIG Ajith Rohana said the captain was arrested from a hotel in capital Colombo, where he and other crew members were held, and will be produced before a local High Court.

Rohana said the Criminal Investigations Department had earlier recorded statements from the captain and several others including the chief engineer of the vessel over the incident.

The X Press Pearl ship is registered under the flag of Singapore and was carrying 1,486 containers with 25 tons of Nitric Acid and several other chemicals and cosmetics from the port of Hazira, India on May 15.

The vessel sent out a distress call while sailing close to the Colombo Port on May 20, and soon caught fire. The Sri Lankan Navy dispatched vessels to bring the fire under control.

The Marine Environment Protection Authority said that the burning of the X Press Pearl vessel had caused a massive environmental disaster as beaches from the south coast to the west coast had been damaged by debris washed ashore.

Sri Lanka's Marine Protection Environment Authority over the weekend removed approximately 1,000 metric tonnes of waste from its beaches following the disaster on board the vessel, local media reported.

The 1,000 metric tonnes of collected waste is now stored in a yard which has a license for hazardous waste storage, officials said.

Sri Lanka's State Minister of Ports and Shipping told the local News 1st that following talks with the Attorney General and the Justice Minister, a claim of 40 million U.S. dollars was made for the damage caused by the X-Press Pearl.

He said this was a preliminary claim and in the future that figure would increase to a much larger amount.