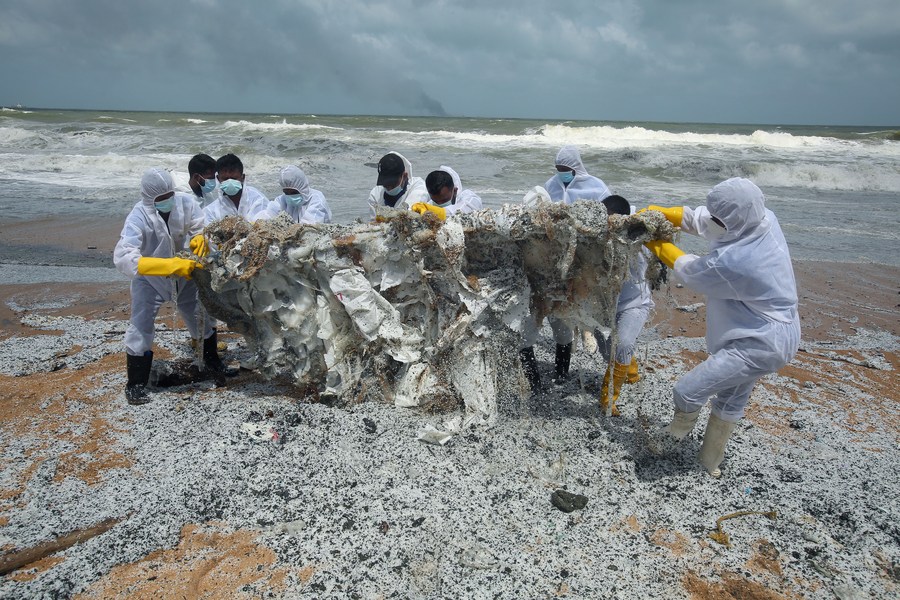 Sri Lankan security personnel remove debris from the X-Press Pearl ship, on a beach at Pamunugama in Negombo, Sri Lanka, on May 28, 2021. (Photo: Ajith Perera/Xinhua)

According to the police, the Director-General of the Marine Environment Protection Authority (MEPA) filed a complaint with the Harbour Police on May 23 over the environmental destruction caused by the fire onboard the foreign vessel.

The police said the officers from the Criminal Investigations Department recorded statements from the captain and chief engineer of the vessel at the hotel in capital Colombo where the crew is undergoing quarantine.

Statements will be recorded from the other crew members in the near future, the police said.

The X Press Pearl ship is registered under the flag of Singapore and was carrying 1,486 containers with 25 tons of nitric acid and several other chemicals and cosmetics from the port of Hazira, India on May 15.

The vessel sent out a distress call while being close to the Colombo Port on May 20, and soon caught fire resulting in the Sri Lankan Navy dispatching vessels to bring the fire under control.

Sri Lanka's MEPA last week said a major environmental disaster was expected following the burning of the vessel and the impact was being assessed.

General Manager of the MEPA Terney Pradeep said the coastal line from the south along the west coast had debris washed ashore and the public had been strongly advised not to touch any of the debris as it could contain hazardous material.

The government said a large amount of marine life had been killed as a result of the pollution from the ship.