Authorities in Sri Lanka were trying to head off a potential environmental disaster Thursday as a fire-damaged container ship that had been carrying chemicals was sinking off of the country's main port.

The Singapore-flagged MV X-Press Pearl started sinking Wednesday, a day after authorities extinguished a fire that raged on the vessel for 12 days. Efforts to tow the ship into deeper waters away from the port in Colombo failed after the ship’s stern became submerged and rested on the seabed. 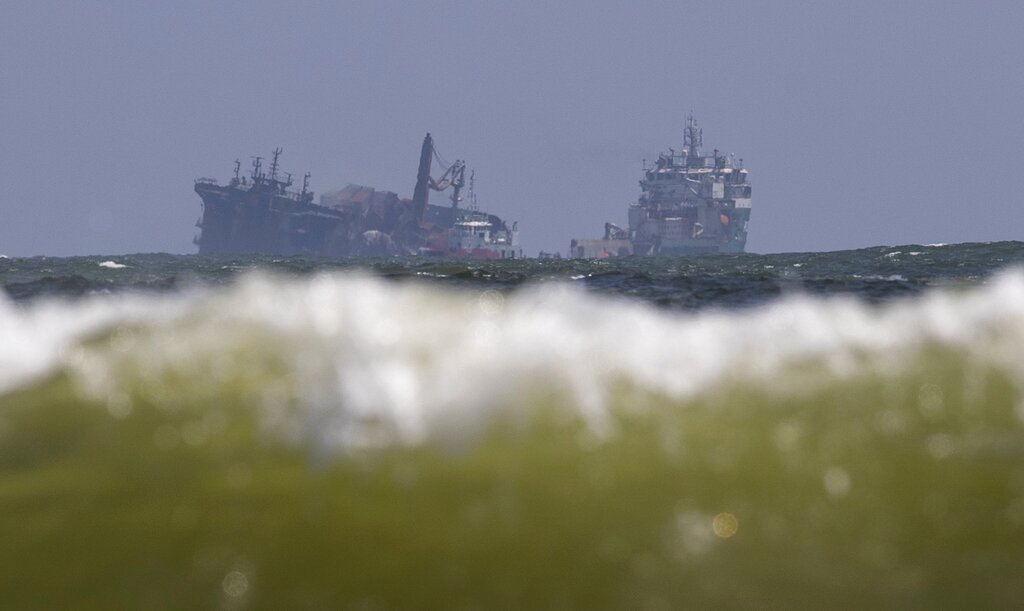 The MV X-Press Pearl, left, is pulled by a navel vessel at Kapungoda, where it is anchored off Colombo port on the outskirts of Colombo, Sri Lanka, Wednesday, June 2, 2021. (Photo: AP)

The ship's operators, X-Press Feeders, say the fire destroyed most of the ship's cargo, which included 25 tons of nitric acid and other chemicals. But there are fears that remaining chemicals as well as hundreds of tons of oil from the vessel’s fuel tanks could leak into the sea.

Such a disaster could devastate marine life and further pollute the island nation's famed beaches. The disaster has already caused debris — including several tons of plastic pellets used to make plastic bags — to wash a ashore.

The government already has banned fishing along about 80 kilometers (50 miles) of coastline.

The ship operator said Thursday that the vessel's stern was resting on the seabed about 21 meters (70 feet) below the surface and the ship's bow was "settling down slowly.” It said salvage experts were remaining with the vessel “to monitor the ship's condition and oil pollution.”

The company said its experts were coordinating with Sri Lanka's navy to deal with an oil spill or other pollution.

Sri Lankan navy spokesman Indika de Silva said the navy and coast guard were preparing for a spill with assistance from neighboring India. India has sent three ships to help, including one specifically equipped to deal with marine pollution.

Colombo port's harbor master, Nirmal Silva, said there had been about 300 tons of oil on board and that experts believe it could have burned off in the fire.

“But we have to look at the worst-case scenario and we are not saying 100% there is no oil. There is a possibility that there may be some,” Silva said. “So far we have not seen any oil spill. We consider we are lucky.” 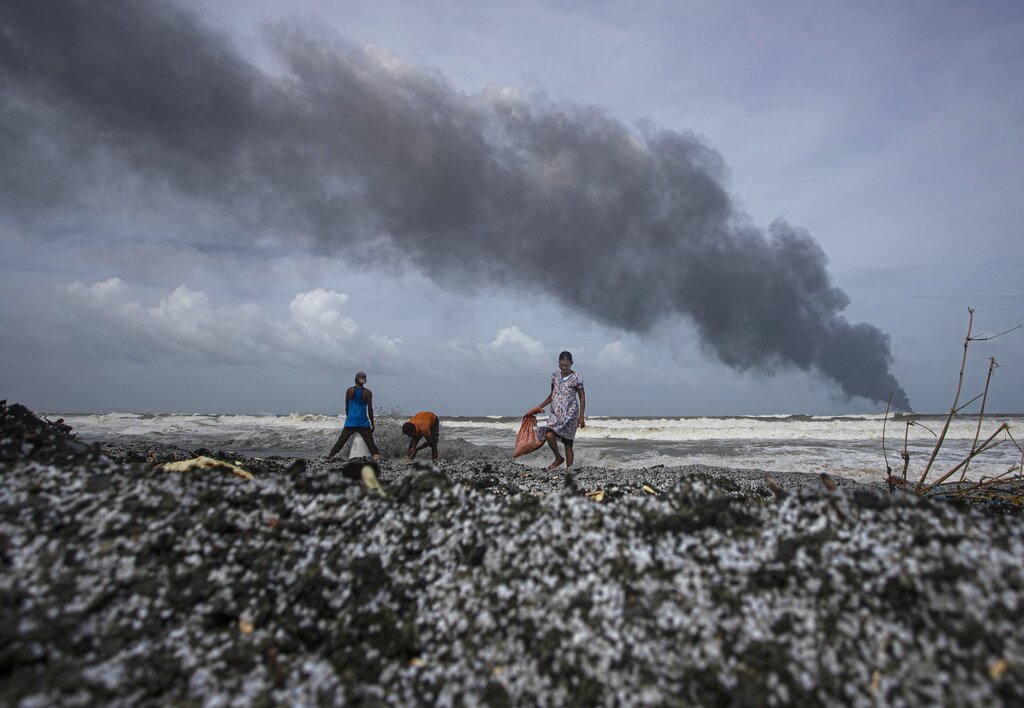 Impoverished Sri Lankans salvage wreckage washed off to the shore from the burning Singaporean ship MV X-Press Pearl which is anchored off Colombo port at Kapungoda, outskirts of Colombo, Sri Lanka, Wednesday, May 26, 2021. (Photo: AP)

Environmentalist Ajantha Perera said there was the potential for “a terrible environmental disaster” as hazardous goods, chemicals and oil could be released into the water and destroy marine ecological systems.

Charitha Pattiaratchi, a professor of oceanography at the University of Western Australia, said as many as 3 billion tiny plastic pellets had already been released into the sea and were washing up on beaches. He said the pellets, known as nurdles, “will persist in the marine environment forever as they are not biodegradable.”

The fire erupted on May 20 when the ship was anchored about 9.5 nautical miles (18 kilometers) northwest of Colombo and waiting to enter the port.

The navy believes the blaze was caused by the vessel's chemical cargo which was carrying from the port of Hazira, India.

Sri Lankan police are probing the fire, and a court in Colombo on Tuesday banned the captain, the engineer and the assistant engineer from leaving the country. The government has said it will take legal action against the owners of the ship to claim compensation.

Sri Lanka’s Environment Minister Mahinda Amaraweera said “it wouldn’t be an easy task to calculate the damage caused to our environment.”

He told the media late Wednesday that an investigation was underway to determine what went wrong and whether the shipping company was responsible.

“If this disaster happened due to negligence, then those responsible should be punished,” he said.