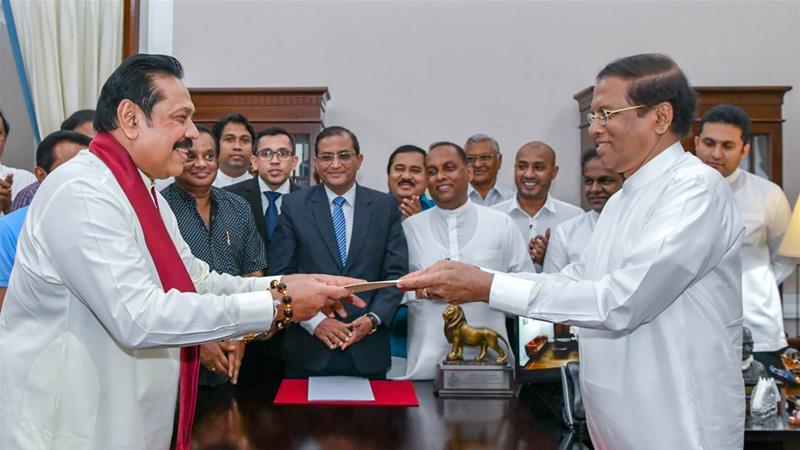 In a shocking move that stunned the nation, Rajapakse took oaths before the president at the Presidential Secretariat in Colombo, with Rajapakse vowing to form a new caretaker government together with Sirisena's United People's Freedom Alliance (UPFA) and his own "Sri Lanka Podujana Peramuna"(SLPP).

Moments after Rajapakse was sworn in, Sirisena in a letter urged Wickremesinghe to vacate his post as Prime Minister, citing Article 42 (4) of the Sri Lankan constitution.

According to the President, Wickremesinghe lost majority in the 225 member Parliament when his own UPFA party which was part of the national government together with Wickremesinghe's United National Party, quitted the coalition government earlier Friday.

The sudden move has been termed as unconstitutional by Wickremesinghe, who in a televised speech to the nation on Friday night said he could only be ousted through a no-confidence motion bought against him in Parliament.

Wickremesinghe said he still enjoyed a majority in Parliament and the move by the President was illegal and urged Parliament Speaker Karu Jayasuriya to convene an urgent parliamentary session on Sunday.

Jayasuriya convened an urgent meeting on Saturday to seek legal advice over the sudden move. He is expected to make a statement later Saturday.

In a retaliatory letter sent to the president, Wickremesinghe stated he was the constitutionally appointed prime minister and would continue in that office.

Political analysts said severe indifferences had been brewing between the president and Wickremesinghe in recent months, especially after Wickremesinghe won a no confidence motion bought against him in Parliament by the Joint Opposition in April.

The rift further deepened after Sirisena expressed disappointment recently saying Wickremesinghe and his UNP-led government had failed to investigate an assassination threat on Sirisena and former Defence Secretary Gotabaya Rajapakse.

In a weekly cabinet briefing two weeks ago, Sirisena angrily questioned Wickremesinghe and the cabinet as to why no action was being taken over such a serious issue.

On Saturday, all political parties were embroiled in separate discussions with citizens questioning to who was the legal prime minister.

Rajapakse's SLPP claimed that it had secured a majority of 120 seats in Parliament.

To secure a simple majority, any political party has to secure 113 seats in the 225-member Parliament.

"We have 120 seats till now. Some UNP MPs have also crossed over to our party. If the UNP feel what the President has done is illegal, then we challenge them to bring a no-confidence motion against Mahinda Rajapakse or challenge it in Supreme Court," SLPP MP Udaya Gammanpila said.

However, UNP Legislator, Ajith Perera said they had well over 113 seats in Parliament and Wickremesinghe would prove his majority when Parliament convenes.

UNP MP Mangala Samaraweera in a statement called the sudden political changed as an anti-democratic coup.

Security was heightened in several areas in and around capital Colombo with Wickremesinghe and Rajapakse, in separate statements urging the public to maintain law and order.