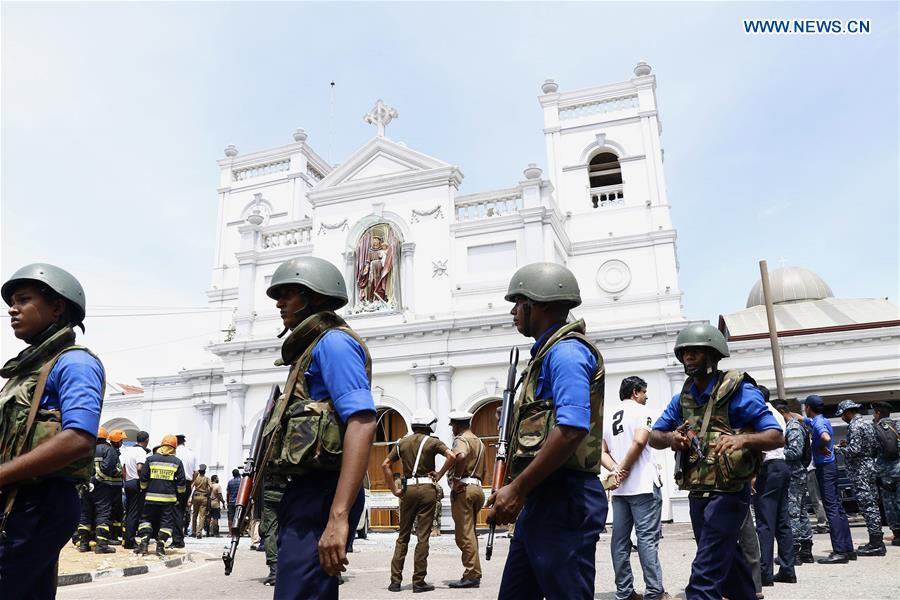 COLOMBO, April 23 (Xinhua) -- Sri Lanka, the pearl of the Indian Ocean, was in tears on Tuesday as the government announced it as the national mourning day for the victims of the multiple bomb attacks which hit churches, hotels and other facilities across the country on Sunday.

On the specific day, some Sri Lankans chose to pay a three-minute silent mourning for the deceased and the injured, while others went to churches, blood donation centers and hospitals to offer their mourning and help.

All government buildings, including the presidential palace and the prime minister's office, as well as hotels and public places, all lowered flags at half-mast to pay condolences to the victims.

At a press briefing on Tuesday afternoon, Sri Lankan Prime Minister Ranil Wickremasinghe said "I offer my condolences to all those killed, and also to those who were not of Sri Lankan origin. Most of the dead foreign nationals are being identified and most of the burials took place on Monday and today (Tuesday). Religious leaders and political leaders are all urging for calm."

Regarding the investigations, he said investigators had made good progress in identifying the culprits, and it would take more time. "There is also news coming in from Cairo that the ISIS has claimed responsibility."

All the 40 suspects who have been taken into custody are Sri Lankan citizens, he said. "It is possible it could have been because of the Christchurch attack."

Concerning the reports that the Sri Lankan intelligence had received terror attack warnings about 10 days ago yet relevant institutions had failed to act to prevent the attacks, Wickremasinghe said President Maithripala Sirisena has launched an inquiry as to why the intelligence did not reach the prime minister's office.

"The government will continue its policy of having unity in the country and having religious groups getting together while cracking down on global terrorism," the prime minister said.

In an exclusive interview with Xinhua on Tuesday, Sri Lankan Minister of Tourism Development and Christian Religious Affairs John Amaratunga said that the multiple blasts which claimed more than 300 lives on Sunday was "internationally oriented," and the situation here was gradually returning to normal.

"We have had our own problems 10 years ago, but this time it is an international movement that has sought to dislocate the Sri Lankan economy particularly by attacking the tourist hotels and also to create unrest in the country by attacking the Christian or Catholic churches," he said.

He asked global visitors, including Chinese visitors, not to be discouraged by the incident, and said Sri Lanka will "bounce back" in about one month to be "a safe place for all tourists to come and enjoy peace."

At the national blood donation center, Deputy Director Feels Saranajeewa told Xinhua that people swarmed into the center after the terrorist attacks occurred. "There was a big crowd. When the people heard about this they came and tried to donate blood," he said.

"People are always helping us with the donations so when the requirement comes, we have past experience also and people are very willingly to come and give blood."

He considered himself lucky as none of his family members or friends got hurt. He suggested the government to catch up with the incident and have a thorough investigation so that such attacks won't happen again.

At St. Sebastian's church about 50 km from the capital of Colombo, Xinhua reporters saw the devastated main hall caused by the blast of a suicide bomber, with the roof completely ripped off, the stained glass windows shattered, and ground peeled off to show mud.

Outside the church, piles of sandals were left on the ground as when the bombing occurred, prayers got so panicked that they fled the scene without shoes. Blood can also been seen on the interior wall of the prayer hall.

Hundreds of Catholics braved the aftermath of the attack and gathered in the church to hold a special mourning ceremony on Tuesday morning. Ramani, a middle-aged woman, told Xinhua that her whole family are devoted Catholics, and her sister's daughter was injured in the blast. When asked if she felt angry at the attack and wanted to revenge, she said "No, I only feel sad and confused. But I'm not afraid and don't want to make vegeance."

Fifty-eight year old Anthony Wickvamasingha held the view that ethnic political groups can create separatism, and he hopes that the government should take more efforts to bridge division, and take immediate actions to stablize the country.

Dozens of Catholic priests wearing white robe and black belt were also present to host mourners. Father Sanjwwa Appuliamy was one of the three priests performing Easter Mass at the church when the attack occurred.

"I didn't notice the attacker at all," he said. "All was very peaceful until the blast."

He said that after the blast, he saw bodies lying on the ground and a lot of blood. "I was heartbroken," he said softly, choking a little bit.

According to a local police, sergent Antom Denipitiyr, about 110 people were killed in the suicide attack at St. Sebastian's church, and about 150 injured, making it the most heavily stricken site among the eight terrorist-hit places, which also included St. Anthony's Church, the Cinnamon Grand, Shangri-La and Kingsbury hotels.

The suspects arrested included the family members of the St. Sebastian's church's attacker, he revealed.

Father Jude Fernando, head of St. Antonio Church, called on "all communities to be peaceful, pray for us and be calm."

"I humbly request and I ask, please pray, don't make any blunders, be calm, be quiet and keep and continue this fraternity and show our love and concern for one another."

The multiple suicide attacks on Sunday have claimed more than 300 lives and over 500 people were also injured in the island country. The Sri Lankan government has imposed curfew at night and declared a state of emergency to give the military and police more powers to contain the situation and prevent further possible bomb attacks.