Sri Lanka launched a criminal probe on Sunday into a massive container ship fire that has swamped the island nation's coast with plastic pollution in an unprecedented marine disaster. 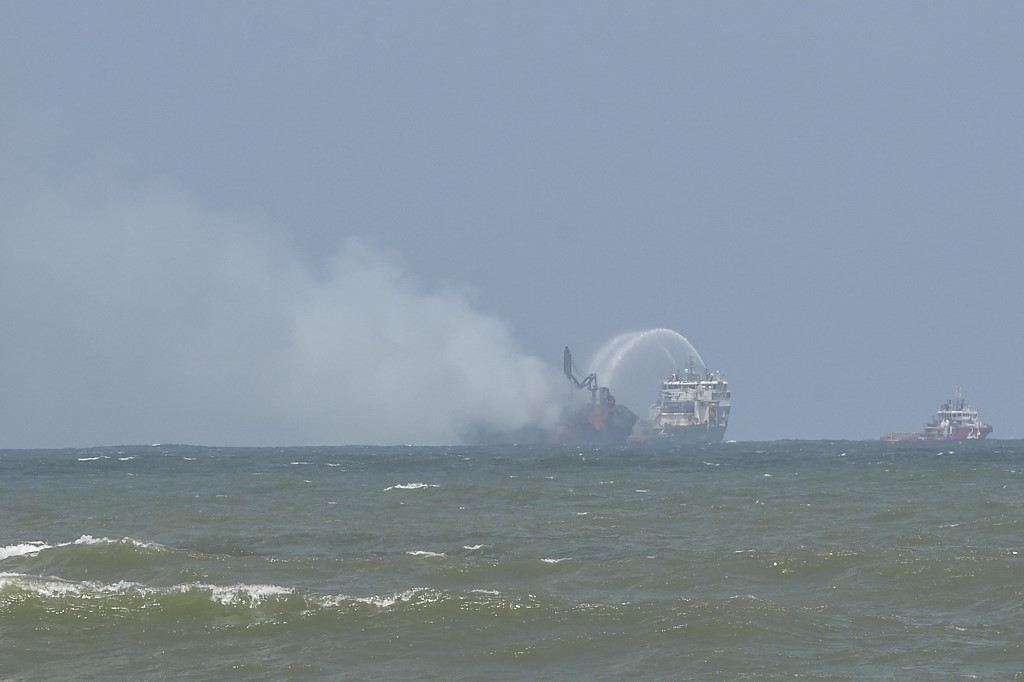 A Sri Lanka's Navy ship (R) tries to douse a fire as smoke billows from the Singapore-registered container ship MV X-Press Pearl, which has been burning for the eleventh consecutive day in the sea off Sri Lanka's Colombo Harbour, in Colombo on May 30, 2021. (Photo: AFP)

The Singapore-registered MV X-Press Pearl has been smouldering on the horizon for 11 days after a blaze broke out as it was heading to Colombo from Gujarat, India.

The 25-member crew, who have already been evacuated from the ship, will be questioned on Monday after a complaint was lodged by Sri Lanka's Marine Environment Protection Authority, police said.

Last week, authorities said they believed the fire was caused by a nitric acid leak that the crew had been aware of since May 11.

"The captain and the crew were in quarantine, but health authorities have told us that we can question them from tomorrow," Ajith Rohana, a police spokesperson, told AFP.

"We have already sent samples of polluted seawater and burnt debris from the vessel for a forensic report."

Authorities and the operators of the container ship say the fire has continued to burn, though it has been brought under control.

The ship's owners, X-Press Feeders, said the vessel's hull remained intact and there was no damage to its fuel tanks.

Much of the ship's cargo, including 25 tonnes of nitric acid, sodium hydroxide, lubricants and other chemicals, appears to have been destroyed in the fire, according to officials.

Sri Lanka's Marine Protection Authority (MEPA) said the plastic waste from the burning ship had probably caused "the worst beach pollution in our history", and warned it could cause years of ecological damage.

Fishermen have been banned from the 80-kilometre (50-mile) stretch of coast where the pellets have washed up.

At least 4,500 fishermen were affected at the fishing and tourist resort of Negombo, officials from the Roman Catholic church in the area said Saturday as they pleaded for financial aid.

Priest Sujeewa Athukorale told AFP on Saturday that there were also fears of reduced demand for seafood from the area over contamination fears.