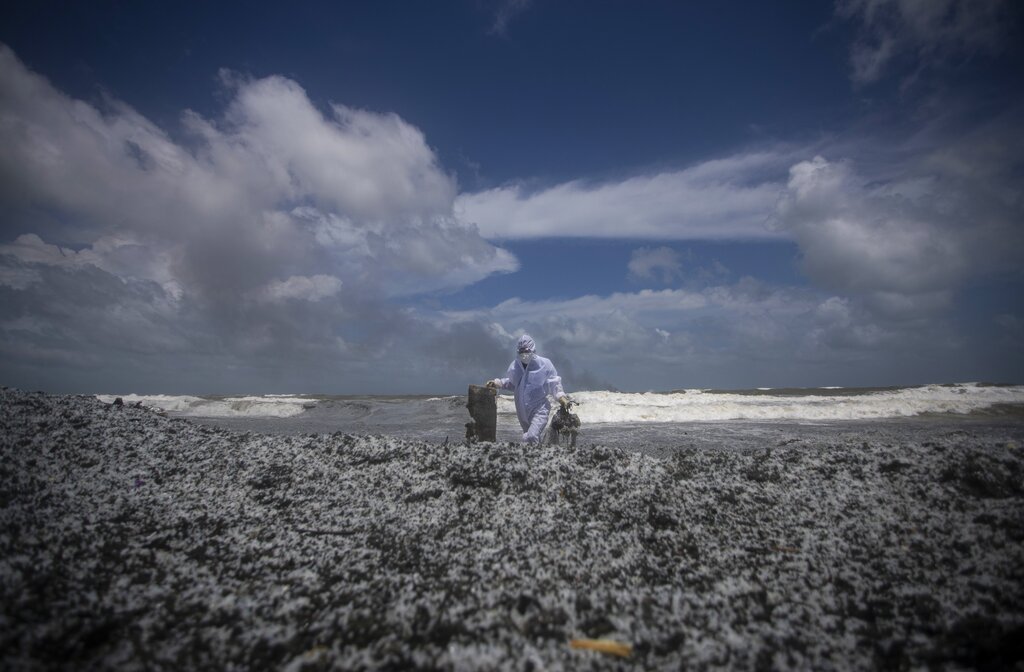 A Sri Lankan navy soldier clad in a protective suit walks on the mounds of debris that washed ashore from the burning Singaporean ship MV X-Press Pearl which is anchored off Colombo port at Kapungoda, out skirts of Colombo, Sri Lanka, Thursday, May 27, 2021. (Photo: AP)

COLOMBO, Sri Lanka (AP) — A special Sri Lankan police team has begun investigating a fire on a ship anchored off its capital, as the government seeks to take legal action against the vessel's owners over the incident, which has caused severe marine pollution, officials said Monday.

The fire on the MV X-Press Pearl has been burning since May 20, ravaging the ship, which officials said is only about five months old.

Navy spokesman Capt. Indika de Silva said the flames are still burning but have been reduced to “small spot fires” in the aft of the ship. Firefighting tugboats continue to spray the vessel, with support from vessels from the Sri Lankan navy and Indian coast guard.

Police spokesperson Ajith Rohana said a special 10-member team from the police Criminal Investigation Department has been assigned the probe. It is to question the ship's captain and chief engineer on Monday.

The vessel’s 25-member crew was evacuated on May 25 after an explosion. It includes Philippine, Chinese, Indian and Russian nationals.

The navy believes the fire was caused by chemicals being transported on the Singapore-flagged ship. It was carrying 1,486 containers, including 25 tons of nitric acid and other chemicals that were loaded at the port of Hazira, India, on May 15. The fire has destroyed most of the ship’s cargo.

Debris — including several tons of plastic pellets used to make plastic bags — from the burning ship has washed ashore and is causing severe pollution on beaches. The government has banned fishing along about 80 kilometers (50 miles) of the coast.

Authorities have also warned residents not to touch the debris because it could be contaminated with harmful chemicals.

The government’s Marine Environment Protection Authority says chemicals have mixed with the seawater and could cause severe damage to marine species and coral reefs.

Local television channels are showing dead fish, turtles and other marine life that has washed ashore in recent days.

The X-Press Pearl was anchored about 9.5 nautical miles (18 kilometers) northwest of Colombo and waiting to enter its port when the fire began.

X-Press Feeders, the operator of the ship, said on Sunday that the vessel’s hull remains structurally intact and there has been no loss of oil into the port’s waters.