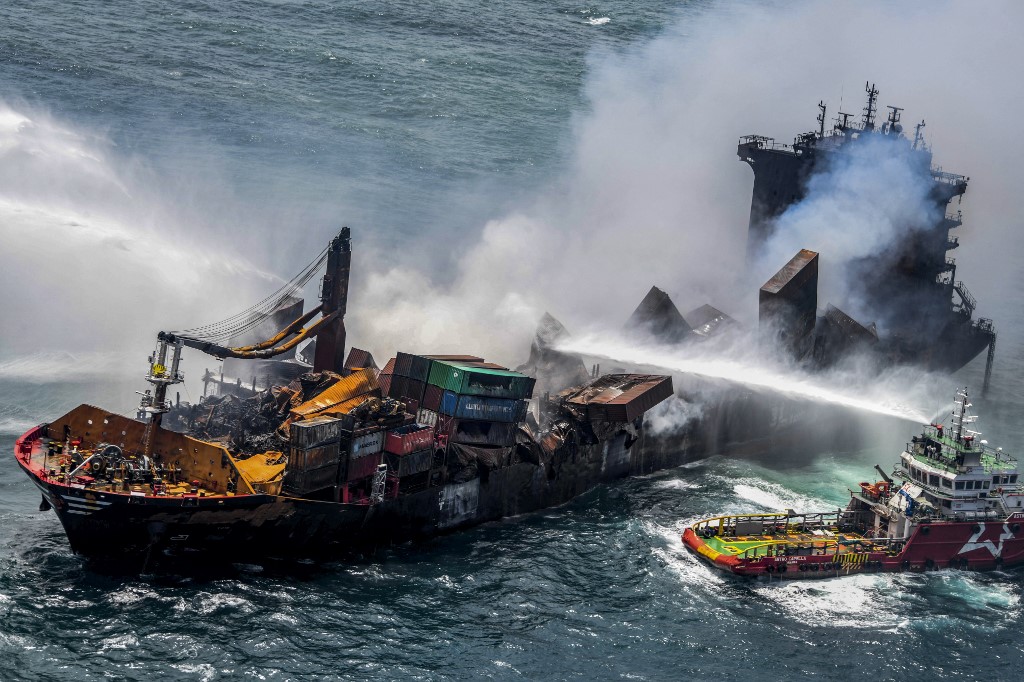 This handout photograph taken and released by the Sri Lanka Air Force on May 30, 2021 shows smoke billowing from the Singapore-registered container ship MV X-Press Pearl, which has been burning for the eleventh consecutive day as vessels try to douse off the fire, in the sea off Sri Lanka's Colombo Harbour, in Colombo. (Photo: AFP)

A fire aboard a cargo ship off Sri Lanka was finally extinguished Tuesday after a 13-day international operation, the navy said.

Tonnes of microplastic granules from its cargo have inundated Sri Lanka's beaches, forcing a fishing ban and sparking fears of ecological devastation.

Navy spokesman Captain Indika de Silva said the stern of the 186-metre (610-feet) long container carrier had gone down by about a metre because of the flooding.

"It is not unusual for the vessel to trim by aft (tilt to the rear) when water sprayed on deck settles in the engine room," Silva told AFP.

He said the spraying of water was stopped to prevent further flooding, but some areas of the ship were still too hot to carry out a complete examination of the vessel, which caught fire on May 20.

Sri Lanka's navy was joined by India's coastguard and tugs brought in by SMIT to battle the flames which destroyed much of the nearly 1,500 containers the vessel was carrying.

The Singapore-registered ship had 25 tonnes of nitric acid and other chemicals as well as 28 containers of plastic raw material, much of which fell into the sea.

The Marine Environment Protection Authority chief Dharshani Lahandapura said they were still assessing the ecological damage, but believed it was the "worst ever in my lifetime".

The three-month-old ship was heading to Colombo from Gujarat, India.

It had previously visited Qatar and Dubai and was due to go to Malaysia and Singapore after calling at Colombo.