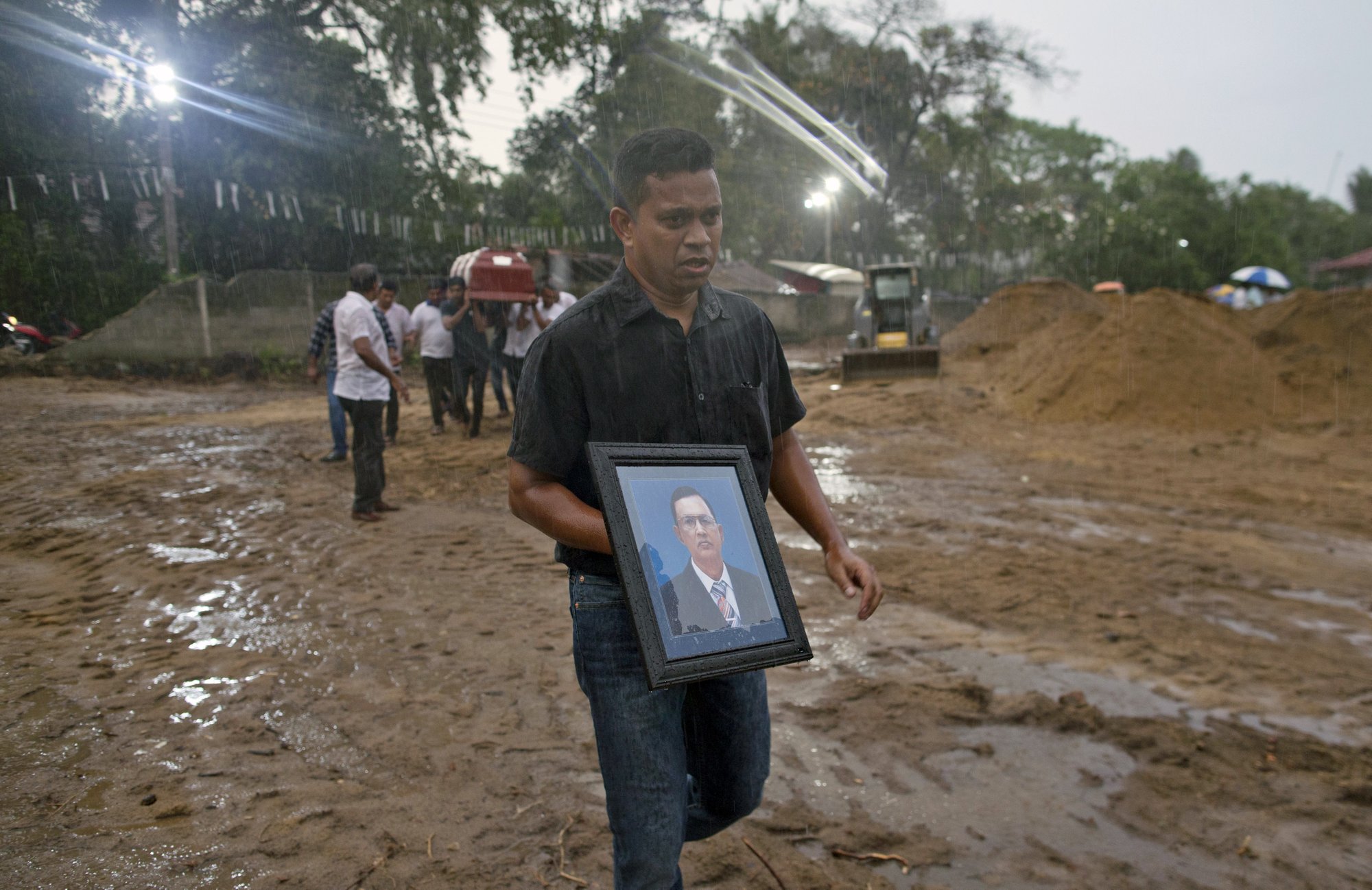 A relative carries a portrait of Calistas Fernando ahead his coffin for burial during the funerals of three people of the same family, all died at Easter Sunday bomb blast at St. Sebastian Church in Negombo, Sri Lanka, Monday, April 22, 2019. (Photo: AP)

At least 290 people were killed in a series of nine bombingsof churches and hotels in Sri Lanka on Easter Sunday.

Sri Lankan authorities say at least 30 foreigners died in the attacks. A look at some of the countries whose citizens were among the victims:

SRI LANKA: The vast majority of the victims were believed to be Sri Lankan citizens, many of them members of the island nation’s Christian minority. Names of many victims and other details on their lives were slow to trickle in and difficult to report, in part because Sri Lankan authorities blocked most social mediaafter the blasts.

But among them was Dileep Roshan, 37, a carpenter who left behind a wife and daughter, his family told The Associated Press.

“His wife and daughter won’t be able to do much now because he is gone,” his older brother, Sanjeevani Roshan, said. “The real question is what will happen to their future.”

Among them were lawyer Anita Nicholson, son Alex Nicholson and daughter Annabel Nicholson, her husband, Ben Nicholson, confirmed in a statement. Nicholson said the family was on holiday, sitting at the table of the restaurant of the Shangri-la Hotel when they were killed. He said: “The holiday we had just enjoyed was a testament to Anita’s enjoyment of travel and providing a rich and colourful life for our family, and especially our children.”

DENMARK: The Bestseller clothing chain confirmed Danish media reports that three of the children of its owner, business tycoon Anders Holch Povlsen, were killed in the attacks. However, spokesman Jesper Stubkier gave no details in an emailed response to a query on the matter and said the company had no further comment.

SPAIN: Spain’s foreign ministry says a Spanish man and woman were killed but didn’t provide further details. The mayor of Pontecesures in northwest Spain, Juan Manuel Vidal, tells Radio Galega he knew the local pair and says they were in their 30s, according to a report by Spanish private news agency Europa Press.

UNITED STATES: The State Department says at least four Americans were killed and several others seriously injured. It gave no details about the victims’ identities.

Fifth-grader Kieran Shafritz de Zoysa, spending a year in Sri Lanka on leave from the private Sidwell Friends School in Washington, D.C., was among those killed, the school said in an email to parents, according to the Washington Post . The email said: “Kieran was passionate about learning, he adored his friends, and he was incredibly excited about returning to Sidwell Friends this coming school year.”

Dieter Kowalski, who lived in Denver and worked for international education company Pearson, died in the blasts shortly after he arrived at his hotel for a business trip, the company and his family told AP . A Friday Facebook post reads “And the fun begins. Love these work trips. 24 hours of flying. See you soon Sri Lanka!”

SWITZERLAND: The foreign ministry says two Swiss nationals, one of whom also had the citizenship of another country it didn’t name, died in the attacks. It said a third member of the family, who had two non-Swiss citizenships, also was killed. It didn’t identify the victims.

OTHERS: The Netherlands, Japan and Portugal have also confirmed their nationals were among the dead.