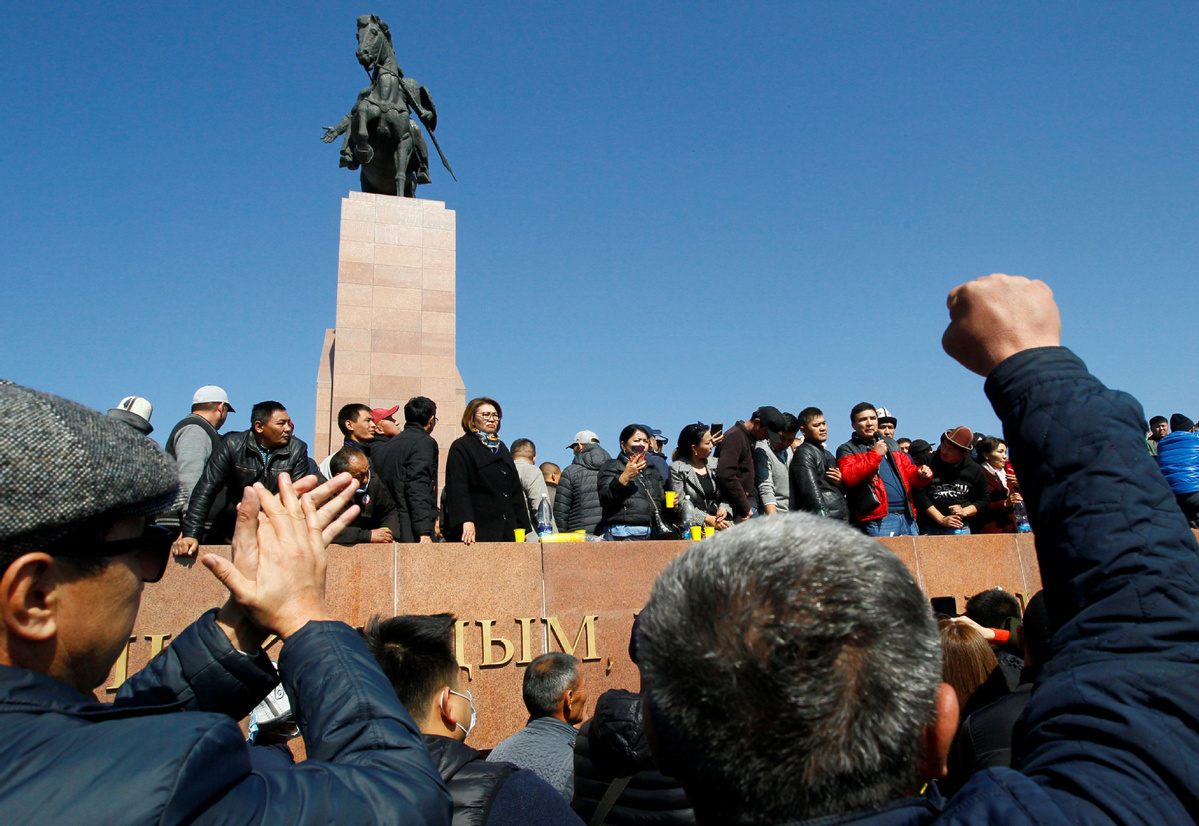 People attend a rally following post-election protests during which opposition groups take control of most of the government's apparatus, in Bishkek, Kyrgyzstan, on Oct 7, 2020. (Photo: Agencies)

The Central Asian nation of Kyrgyzstan slid deeper into chaos as rival opposition factions made grabs for power on Wednesday, a day after they stormed government buildings, forcing the prime minister to quit and a parliamentary election to be annulled.

After the resignation of Prime Minister Kubatbek Boronov's government late on Tuesday, Kyrgyz President Sooronbai Jeenbekov called for all-party talks during an interview with the BBC.

Jeenbekov has held talks with all political parties, according to his press secretary, Tolgonai Stamalieva.

Late on Tuesday, the Parliament agreed to nominate opposition politician Sadyr Zhaparov－freed from prison by protesters just hours earlier－for prime minister, but a protester then broke into the hotel where it convened, forcing Zhaparov to leave through a back door, according to Kyrgyz media.

On Wednesday morning, the self-proclaimed People's Coordination Council set up by several opposition parties said it would not recognize Zhaparov's interim Cabinet and was assuming all state powers itself and dissolving Parliament.

Sixteen parties took part in Sunday's election and 11 refused to accept the results. As protests grew, the election commission annulled the vote.

There were scuffles overnight between vigilantes and protesters who tried to force their way into government buildings or attacked businesses such as shops and restaurants, according to a report by local news website 24.kg.

On Tuesday, Antonio Guterres, secretary-general of the United Nations, called on all Kyrgyz parties to engage in dialogue and agree on a way forward "within the constitutional framework".

Russian President Vladimir Putin said on Wednesday that Moscow was concerned by the unrest in Kyrgyzstan and hoped for a swift return to stability.

China hopes Kyrgyzstan will restore stability as soon as possible, Foreign Ministry spokeswoman Hua Chunying said on Wednesday, adding that China is highly concerned about the situation in the country.

As a friendly neighbor and comprehensive strategic partner, China sincerely hopes that all parties in Kyrgyzstan can properly resolve the problem in accordance with the law through dialogue and consultation, she said.

China has always respected the development path chosen by the Kyrgyz people in line with their national conditions, Hua said, noting that China firmly supports the policies and measures adopted by Kyrgyzstan in safeguarding its independence, sovereignty and security, and firmly opposes external forces' interference in Kyrgyz internal affairs.

The US State Department urged a peaceful solution and restraint in Kyrgyzstan on Tuesday as it acknowledged concerns about election conduct that set off major protests.

Agencies, Xinhua and Cui Haipei in Beijing contributed to this story.