Liu Xiangping, a Chinese-Canadian artist and stamp designer, recalled a remarkable experience in a previous Year of the Ox. 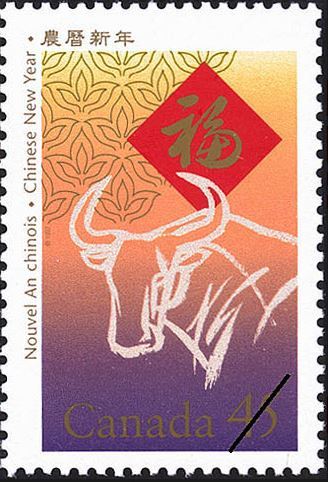 It was 1997, the year that Hong Kong was returned to China, and Canada Post, in conjunction with the then-Hong Kong Postal Administration and China, celebrated the Chinese New Year with a stamp.

In January 2017, a special 45-cent stamp designed by Liu and two other Chinese Canadian artists was issued. Since then, Canada Post has been issuing a zodiac stamp for the Chinese Lunar New Year each year.

"Many traditional customs related to the Chinese New Year are indeed transnational. They transcend political and cultural differences. They powerfully reflect the close connections of the overseas Chinese to their ethnic roots," Liu said.

Liu said that what he was most proud of last year was the creation of a commemorative stamp for China Post on the theme of fighting the COVID-19 pandemic.

When China Post issued a set of special stamps in 2003 to mark the triumph over SARS, Liu was one of the designers.

In January 2020, Liu left Toronto for Beijing. With the impact of COVID-19 drawing the attention of the entire country, China Post invited him once again to be one of two chief designers of a set of anti-pandemic-themed stamps.

On May 11, 2020, China Post issued the two stamps. One featured the phrase "Pursue Together, Combat the Pandemic" to pay tribute to the Chinese people in the fight against the virus.

Liu said the most important principle for the designs is to present the Chinese spirit of solidarity as well as that of human nature in tough times. "I tried to express the sense of perseverance, anxiety and sorrow at the same time through people's eyes," Liu said.

As an artist who has been involved in the creation and design of China's national historical works, Liu believes the function and influence of culture are among the universal values shared by different nationalities.

To commemorate the centennial of Norman Bethune's birth and his accomplishments, Canada and China jointly issued a pair of commemorative stamps in 1990. Bethune dedicated his life to medicine and humanitarianism in China in the late 1930s.

Jean Morin and Wanda Lewicka of Canada designed the stamps, and Liu illustrated them.

Representing Bethune's images changing from a civilian doctor who practiced in Canada to a battlefield surgeon who served Chinese soldiers during the War of Resistance Against Japanese Aggression, Liu aimed at reflecting Bethune's legacy and spirit that combined medical humanitarianism and international communism.

"The stamps are the product of close cooperation and cultural exchanges between Canada and China. They symbolize the fundamentals of the friendship between the two countries," said Liu. "We'll never forget that Chinese and Canadian people were committed to the common values of justice and peace in WWII."